According to the boffins @ The Official String Theory Web Site “it seems safe to estimate that the age of the Universe is at least 15 billion years old, but probably not more than 20 billion years old”.

According to the American geologist G. Brent Dalrymple, the Earth is 4.5 to 4.6 billion years old.

“The origins of life on Earth bristle with puzzle and paradox” writes Nicolas Wade (New Glimpses of Life’s Puzzling Origins, The New York Times, June 15, 2009), while “rocks that formed on Earth 3.8 billion years ago… contain possible evidence of biological processes”.

The first animal life on Earth may have been the comb jelly. Thus:

A new study mapping the evolutionary history of animals indicates that Earth’s first animal–a mysterious creature whose characteristics can only be inferred from fossils and studies of living animals–was probably significantly more complex than previously believed.

The study, which was funded by the National Science Foundation (NSF), is the cover story of the April 10, 2008 issue of Nature. Using new high-powered technologies for analyzing massive volumes of genetic data, the study defined the earliest splits at the base of the animal tree of life. The tree of life is a hierarchical representation of the evolutionary relationships between species that was introduced by Charles Darwin. 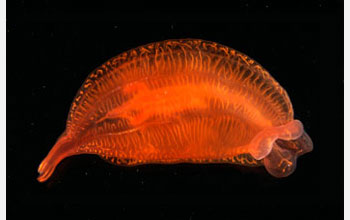 “It may be more than 570 million years old and look like a knobbly rope, but scientists believe they have discovered the first animal on earth ever to have sex“: funisia dorothea.

The pointy-heads @ the Lunar and Planetary Institute in Houston, Texas write that: “Fossils of the earliest mammals are more than 200 million years old. These small, shrew-like animals probably lived in caves or burrows and hunted insects and small reptiles at night.” C. David Kreger @ Archaeology Info writes: “Most researchers currently accept the statement that “modern” humans can be considered to date to approximately [200-250,000 years]. Others (such as Milford Wolpoff), take the view that our species extends as far as approximately 2.0 [million years], subsuming H. erectus, H. ergaster, and H. heidelbergensis. There are two polarizing camps on the issue of our species origin (though there is varying degrees of compromise between the two stances as well as various alternative positions): the multiregional (or continuity) camp, and the Out of Africa (replacement) camp.”

Australia is widely regarded as being home both to the world’s oldest continuing culture and strenuous efforts to eliminate it.

The British colonisation of Australia commenced in 1788.

I was born 183 years later and, all things being equal, can expect to live for perhaps another 30 or 40.

“We must secure the location of the triforce and a future for Hyrule’s children.”

I live in Melbourne, Australia. I like anarchy. I don't like nazis. I enjoy eating pizza and drinking beer. I barrack for the greatest football team on Earth: Collingwood Magpies. The 2020 premiership's a cakewalk for the good old Collingwood.
View all posts by @ndy →
This entry was posted in !nataS, Death, History. Bookmark the permalink.