A SYDNEY academic who created a racial furore by claiming African refugees were linked to high crime rates has apologised for his comments.

The university subsequently suspended him from teaching after he made further comments about Sudanese refugees and non-white immigration.

Safi Hareer from the Sudanese Darfurian Union sought a public apology from… Fraser in a complaint to the Human Rights and Equal Opportunity Commission (HREOC), saying the academic’s letter had breached the Racial Discrimination Act.

[Fraser] received a letter from HREOC president John von Doussa in April saying his comments were unlawful, and rejecting the professor’s submission that the letter held academic merit.

Mr von Doussa invited [Fraser] to a HREOC conciliation with Mr Hareer, urging him to apologise for the letter.

At the time [Fraser] said an apology “was out of the question”.

But Mr Hareer’s lawyer, George Newhouse, said [Fraser] had apologised to his client and the matter had been settled.

A public apology will also be published in the Parramatta Sun newspaper today.

“After mediation, [Fraser] agreed to apologise to Mr Hareer and to the Sudanese community in Australia,” Mr Newhouse said.

Mr Newhouse said [Fraser] had acknowledged that he had hurt fellow Australians.

“Andrew Fraser has apologised for his hurtful statements and Safi Hareer has accepted his apology,” he said.

“(Mr Hareer) was really pleased that two people with different views could sit down and discuss and resolve their differences in a human way, man to man.

“All credit to [Fraser] for apologising, and I’m glad it was done without going to court because really, no-one wants to do that.”

[Fraser] could not be contacted last night.

Not unexpectedly, news of Fraser’s ‘apology’ has been greeted on Scumfront, Fraser’s strongest supporter, with some dismay — and this appraisal by James Newman, the bonehead who videoed the Cronulla riots, added a Skrewdriver soundtrack, then uploaded it to the site:

As [Fraser] said at the [Sydney Forum]… He apologized for hurting any thin-skinned people who may have been offended [by his remarks,] but still believes that importing [sic] large numbers of blacks to Australia is a sure fire way [to] increase… crime and other social problems. [This] they can[‘]t deny because it is the truth[.] That[‘]s why they never took him to court because they knew they would lose. [Fraser] said they could do what they liked with the apology[,] but there is no way he would [pay] to have it printed in the media.

This is nothing but spin from that dog Newhouse.

As usual, the bonehead in question gets it arse-backwards: if Fraser “apologized”, it was likely because he estimated that, if it went to court, he would lose. Still, the bonehead’s account is useful if for no other reason than it demonstrates the (in)sincerity of Fraser’s “apology”.

Further, the fact is Fraser has been very active since June 2005, the date of publication of his racist letter to the Parramatta Sun, reportedly a result of Fraser’s “…seeing a photograph of a Sudanese child” in the paper. “Associate Professor Fraser wrote to the newspaper saying ‘an expanding black population is a sure-fire recipe for increases in crime, violence and a wide range of other social problems’.”

Indeed, according to the Canadian-born Fraser in an interview with Ray Martin on ACA (July 17, 2005), the ‘typical’ Australian is and should be “the sun-bronzed, blonde, blue-eyed Aussie. That is what brought me down here. That is what, I would say, brought many people down here, the belief that what was really attractive about Australia, was that it was populated by [sun-bronzed, blonde, blue-eyed] Australians”.

Soon afterwards, Fraser’s membership of and status as ‘legal adviser’ to the (now largely defunct) Patriotic Youth League (PYL) were exposed (‘Top academic accused of neo-Nazi links’, The Australian, July 20, 2005); his lying protestations to the contrary undermined by Melbourne resident Luke Connors of the PYL. One measure of Connors’ character may be found in the same email in which Fraser’s status was revealed: “Mr Connors said he had conducted an online poll asking PYL members to identify the most troublesome minority in their area: ‘abos, curry munchers, wogs or chinks?'”.

Following his refusal to have his contract bought out by the University (Fraser was due to retire in June this year) and then being suspended from teaching duties, Fraser had his essay ‘Rethinking the White Australia Policy’ — Fraser’s Big Idea is a return to a White Australia — rejected by Deakin University for inclusion in the Deakin Law Review.

Denounced as a racist and a shoddy academic, as a show of support for Fraser, the fascist Australia First Party (of which the PYL was its nominal youth wing) organised a rally on October 8th, 2005 outside Kirribilli House. Led by the neo-Nazi criminal Dr. James Saleam, AFP could only manage to attract a handful of protesters: the bulk of Fraser’s support was generated by racists and fascists on sites such as Scumfront. Still, one good turn deserves another, and in February 2006, Fraser travelled to Virginia in the United States to address the White supremacist 2006 American Renaissance Conference.

After having been informed in April 2006 by HREOC that, in their opinion, his original letter was illegal, Fraser declared that he was unwilling to ‘apologise’. According to Greg Roberts (‘No apology for linking Africans to crime’, The Australian, April 4, 2006):

In a landmark ruling that raises fresh questions about the limits to which academics can engage in public debate, HREOC chairman John von Doussa has found Professor Fraser’s comments were unlawful because they amounted to a “sweeping generalisation” that was not backed by research…

But Professor Fraser told The Australian he would not apologise to anyone.

“Even those who disagree with me should be appalled at this attack on the freedom of academic debate”,” he said.

“This gives the lie to all those politicians who’ve claimed that racial hatred legislation would not curb freedom of expression in Australia”.

After having denied the offer of a free ticket to one of Rain Pryor’s performances at the Melbourne Comedy Festival, Fraser accepted the opportunity to cite the convicted neo-Nazi criminal Ben Weerheym in his essay ‘Rethinking the White Australia Policy’. 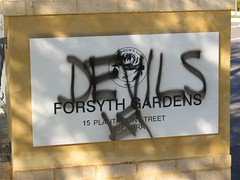 Finally, last weekend Fraser addressed the fascist Sydney Forum, an address which may, in turn, have been a way of saying ‘thanks’ to AFP following their ‘action’ in support of Fraser at the Sydney office of George Newhouse on July 26.