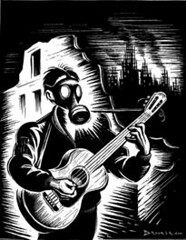 [Update : As far as bad bosses go you don’t get much worse than Heinemann Electrics. Heinemann have forced their workers on to the picket line by refusing to negotiate a decent agreement or to pay them for a whole week’s work. Show our brothers and sisters at Heinemann that they aren’t standing alone. Come to a solidarity breakfast on the picket line at 821 Springvale Rd, Mulgrave at 8.00am on Wednesday, 13th September 2006. You can also donate to the fighting fund for this dispute. Donations are being collected at the picket, or can be left with Linda or Jacqui at the ETU office at 516-520 Swanston St Carlton South. Receipts for donations can also be issued via the ETU office… BYO vegeburgers and sausages!]

Australians all let us rejoice; for we shall work for free?

Presently I am spending my days standing outside Heinemann Electric Pty Ltd, the company that my mother has worked in for 18 years, my father and husband for 3 years, and though I left early this year, I was employed there for 13 years, working with my mother and husband in the Slegers Products division. Why am I standing on the outside of these gates? After months of workers and management negotiating an EBA, things came to a standstill when John HoWARd’s IR laws came into effect, and the company backflipped on many of their negotiated clauses, expecting no resistance. An imminent signing by all parties was looking promising, until the point where the company decided instead to offer a very different EBA than the one negotiated.

To try to be heard in a hopeless situation and bring management back to the negotiating table, it was decided to apply a minimal amount of industrial pressure by putting a ban on overtime, and to choose one day only of strike action. Currently the company operates under a policy of voluntary overtime, though they are now claiming that the overtime hours are part of their normal continuous hours (bull!). While not expecting to be paid for the day of strike action, the company threatened that all employees refusing to do “voluntary?” overtime would not be paid for their normal hours of work either. It was advised on Tuesday, 22 August 2006, that employees would not be paid while an overtime ban was effective, and it wasn’t until Thursday, 24 August 2006, that this was proven with pay receipts. A minimum of 3 working days must be given of intended industrial action, so for 5 days normal hours were worked, and for more than 40 employees those 5 days have still not been paid.

More than half the people effected have never been asked to work overtime by the company prior to the individual interviews held by Richard Ross on 22 August, 2006.

This has been allowed to occur because the new interpretation of the law is that a company is not obliged to pay employees during industrial action, always interpreted previously as industrial “strike” action. This creative interpretation was advised to the company by Freehills, the lawyers who helped draft the WorkChoice laws, who initially claimed the clause was “overlooked” and the company found it themselves, but finally had to admit they lead the company to it. While the Industrial Relations Commission agreed the company should pay the employees, it seemed to have no power to force this action.

Heinemann Electric is a national company, with its base of operations in Mulgrave, Victoria, and sales branches in each state.

As a further slap in the face to the Australian people, the parent company in South Africa, CBI, which is part of the very successful Reunert group which also owns Mitsubishi Electric and GE Electric, refuses to guarantee the accrued entitlements of local workers. The only people who will give these workers anything if this poorly managed company goes belly-up is the Australian taxpayer through the Gears Scheme. We are supposed to be a first world country, but John HoWARd’s new WorkChoice laws are making it possible for third world ideas to become our practice.

So if you pass me on Springvale Road in Mulgrave, and you’ll recognise me as the waving lunatic, please have a heart. I could be you one day. The only choices left are to give up all negotiating rights and accept a one-sided EBA; remain inside the factory working, not being paid; or take it to the streets and fight. Which will you choose?

I would like to personally thank some very valued supporters who are helping boost morale in some very tough times. This list is growing daily, so please forgive me if you are not mentioned here.

To those who wave and toot their horns in support, your voice is greatly appreciated. To the many people who have stopped to ask us why we are there, and have offered their words of encouragement and support, especially the beautiful lady who bought us coffee, thank you.

Thank you to the builder’s union for our very handy shelter which was very timely, and to the many unions who are standing by us and providing much support and encouragement. To the fantastic guys at Amcor who have been so generous with their support, thank you.

A very special thanks to the ETU organisers and members, who are standing by us daily, and supporting us when the fight seems too hard. We are proud to stand arm in arm and fight. Our forefathers’ blood, sweat, and tears gained us the rights we have today. Loading, annual leave, better wage conditions, protection of accrued entitlements, an eight hour day, these all had to be fought for. Today these rights stand precariously on a cliff made by little John. We can only hope that our fight will help you when it is your turn to fight, and believe me, we will all have a turn.

HEINEMANN ELECTRIC PTY LTD – ALL WORK AND NO PAY? NO WAY!!!