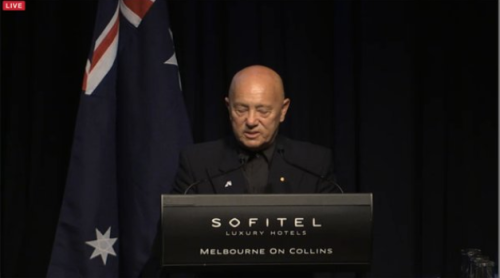 • The anti-Muslim Australian Liberty Alliance (ALA) launched its Victorian Senate campaign in the Arthur Streeton room at the Sofitel On Collins on Wednesday night (April 27). The MC was diminutive Tory, Gary ‘Angry’ Anderson. You may remember him from such political stunts as the Liberal Party’s 2010 NSW election campaign and the 1991 VFL Grand Final half-time entertainment.

• Along with the Australia First (AFP) and One Nation (ONP) parties, the ALA is one of three ‘far-right’ parties surveyed by news.com.au in Far-right-wing parties after your vote on election day (Oliver Murray, April 26, 2016). Not included are the (unregistered) Party for Freedom (ie, Nick Folkes & Co.), Danny Nalliah’s Rise Up Australia Party (RUAP), and ‘Fortitude’, the stillborn political party of the ‘United Patriots Front’ (UPF).

AFP has been contesting state and federal elections since 1996, to little effect and with zero success. The party wants to re-institute the White Australia policy, inter alia, which is rather ironic considering its leader, Dr Jim Saleam, is of Lebanese ancestry. Arguably the most coherent in terms of ideology, it’s also the least popular (except among neo-Nazis), and struggles to field a team at public events.

The ALA is the political expression of the Q Society, and is the semi-professional face of Islamophobia in Australia. The party has nominated a nobody named Daniel Jones to lead its fight against Creeping Shariah in Victoria. An outside chance of a win elsewhere in the country, the party has solid financial backing.

One Nation’s main attraction remains Pauline Hanson, who only narrowly lost the race for a seat (Lockyer) in the Queensland state parliament in 2015. If she fails, as seems likely, to win the Senate contest, she’ll still walk away with tens of thousands of $ in prizes. In 1996, Pauline reckoned she and the rest of Australia was in danger of being ‘swamped by Asians’; twenty years later, it’s now Muslims who threaten to sink White Australia, especially Bendigo. Sadly, this week saw Bendigo councillor Elise Chapman withdraw as ONP’s candidate for the Senate in Victoria. See : Bendigo anti-mosque campaigner Elise Chapman withdraws One Nation election candidacy, Peter Lenaghan, ABC, April 27, 2016.

RUAP is one of several Christian parties on offer (others include the Australian Christians, Christian Democrats (Fred Nile’s mob), and Family First), and has worked very closely with the UPF over the course of 2015, happily sharing a platform with neo-Nazis and fascists. (This is presumably because God told Danny that Hitler, like Jesus, was ace and grouse.) UPF flunkey Scott Moerland is a former RUAP candidate and while it’s unknown if God has told him to run again, he did share a stage with Danny at the massive February 6 PEGIDA rally in Canberra, along with John Bolton (ALA Senate candidate in South Australia), his (other) fuehrer Blair Cottrell (UPF), Kim Vuga (Love Australia or Leave micro-sect) and Chris Shortis, the Victorian man who’s allegedly pumped $20,000 into Cottrell’s dingbat campaign to become Chancellor of Australia.

Still, you’ve gotta risk it to get the biscuit amirite?

Among those who attended the event was former UPF member Neil Erikson, armed as always with his camera, and finding a natural place among the police also monitoring the event. After a few minutes filming it appears that Neil fell over, and may even have damaged his camera as a result. He later claimed to have assaulted local anarchist Kieran Bennett and to have knocked him unconscious — a claim which Kieran rejects. (Note that Neil was accompanied by two comrades, who also allegedly tripped and fell over.) Bizarrely, within the space of less than 24 hours, Neil’s account of the event changed from one in which he ‘knocked out’ a political opponent to claiming that an unknown person inserted a finger up his bottom while he was lying on the ground; a claim picked up by Buzzfeed (Far Right Nationalist Claims Someone Stuck A Finger In His Anus At A Protest, Lane Sainty, April 28, 2016). 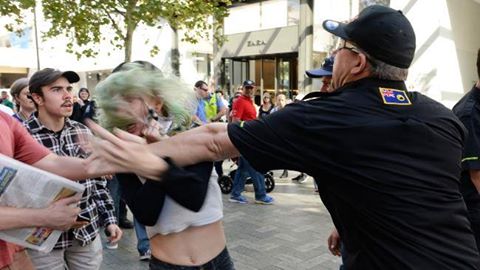 • It appears as though Dennis Huts — the leading ‪UPF flunkey in Perth — bravely struck a young woman at the Safe Schools rally in Perth last week (April 22), thus confirming his reputation as a man of deeds as well as words. (He claims she waved a placard in his face.) In any case, it’s indisputable that such behaviour embodies the very best of the ANZAC tradition, and The Ghosts of Gallipoli would no doubt agree that the UPF is fully entitled to claim — as it does — to stand in this tradition. Indeed, the dangers, hardship and loss that accompanied the ANZACs’ ultimately futile attempt to establish a foothold on the Gallipoli peninsula are echoed in UPF fuehrer Blair Cottrell’s own tale of amazing courage in the face of adversity. Following the rally, Huts published a series of photos of those attending in order to support Safe Schools, with predictable results. Later, Facebook forced him to remove the photos. See : Facebook removes ‘gay shaming’ from United Patriots page, Out in Perth, April 27, 2016.

• Former UPF associate Phill Galea was in court again this week in Bendigo.

Galea appeared at a contest mention hearing in the Bendigo Magistrates’ Court on Tuesday [April 26] to fight his charge of possessing a distress signal without reasonable excuse.

He has risked an even larger fine after refusing to settle the charges in court, wanting to call the boat owner as a witness to give evidence to the court.

The charges stem from a United Patriots Front rally in Bendigo on October 10, when police were mistakenly told Galea was carrying a knife.

Instead, they found a flare in his front right pocket.

Galea told police it was for his personal protection, but later claimed he was holding it for a friend, a member of the Australian Patriots Defence League.

• Casey councillors have rejected an application to build a mosque in Narre Warren, however Rejection of plan not based on religion, Melbourne council says (Jessica Longbottom, ABC, April 27, 2016). The mosque has been the subject of a months-long grassroots campaign in opposition to its construction, as virtually all such projects are now in Australia, a campaign which also attracted the support of the UPF. At this stage, it seems likely that the mosque developers will appeal the council’s decision, so it’s far from clear whether or not the mosque will actually be built — or not. Note that Casey council rejected a previous application to convert a gym into a mosque in 2014. See also : Mosque opposed by far-right political groups likely to be blocked, Melissa Davey, The Guardian, April 27, 2016.

• Finally, the ‘True Blue Crew’ in Melton have declared that they’ll be rallying in Coburg on Saturday, May 28. You may remember the TBC from such events as the UPF rally in Bendigo in February 2016 (where they shouted impotently at police and anti-fascists), the Reclaim Australia rally in Melton in November 2015 (where they shouted impotently at anti-fascists) and from the Reclaim Australia/UPF rally in July 2015, when a handful of TBC fell over, got pepper sprayed, arrested, and slapped with token fines. ‘Stop the Far Left! – Rally Supporting the Australian Governments Use of the Offshore Detention Centers That Protect Our Nation’ is the full title of their grand plan for Coburg in May, and is intended to be a response to another rally titled ‘Moreland says NO to Racism’, organised by local councillor Sue Bolton (Socialist Alliance), which demands ‘Stop the forced closure of Aboriginal communities -Treaty now’; ‘Let the refugees in – Close Manus and Nauru’ and ‘No to Islamophobia’, and which is endorsed by a large array of other organisations.

Fascists haven’t held a rally in Coburg since the mid-1990s, when Dr Jim Saleam’s former party National Action were quite active in the area. An NA rally at Brunswick Town Hall in March 1994 was protected by a large number of police, but even with police reinforcements the neo-Nazis were forced to flee both the Hall and the suburb, grabbing a specially-commadeered train express from Brunswick to the city. See : Anti-fascism in Melbourne: 1990s (March 20, 2007). The UPF has announced that it will be supporting the TBC, and it’s safe to assume that every patriotik Tom, Dick and Adolf will too. How committed the police are to facilitating a fascist assembly in Coburg, however, is an open question.