The Continuing Appeal of Crasstafarianism 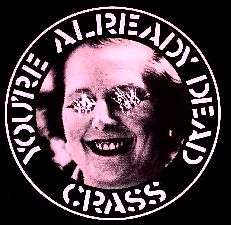 Huh. That’s interesting. I-and-I Googled ‘Crasstafarianism’ and found this: from a neat-o site, to boot!

Anyways, as is the seemingly inevitable outcome of any significant (and even non-significant) cultural/political phenomenon, someone’s gone and written a book about it. Below is an article from the New Statesman (Iain Aitch, ‘Forever Punk’, October 2nd, 2006) reviewing two new books about the pioneering anarcho-punk band Crass…

On the face of it, Crass possessed all the right credentials to earn a place alongside The Clash and the Sex Pistols in the punk history books. The band had the requisite string of high-selling, profanity-ridden [and highly scatological!] records and the amusingly named band members (Phil Free, Steve Ignorant, Joy de Vivre) [also B.A. Nana/N.A. Palmer, Mick Duffield, Eve Libertine, Penny Rimbaud, Gee Vaucher, Pete Wright… and John Loder and Steve Herman!], and was even formed in 1977. Yet it seldom merits a mention on the ubiquitous talking-heads clips shows or makes more than a footnote in music-press retrospectives.

This is surprising when you consider the impact Crass had at the time: in their early-Eighties heyday, they could shift upwards of 20,000 records in the week of release, with no advertising and no airplay. Their anti-Falklands war records were discussed in the Commons and they were even approached by the KGB. 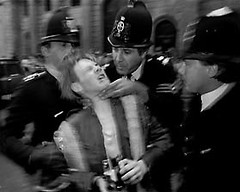 [Above : London’s finest at play during Stop the City (1983), captured by David Hoffman; later used by Chaos UK for the front cover of Short Sharp Shock, then serving as the model for Michelle Shocked‘s Short Sharp Shocked.]

Few bands have done more to bring radical politics to youth culture. For the Pistols, “Anarchy in the UK” was just a song [which they’ve now sold for shitloads of money], but for Crass it was an aim. Their Stop the City protests were [partly] the forerunners of the anti-globalisation movement; their stance on animal rights [partly] inspired the formation of such groups as the Animal Liberation Front. Reclaim the Streets, the McLibel trial and even the success of The Body Shop could be said to have roots in their alternative appeal.

[Maybe. Alternatively, one might find the “roots” of such activities — with the obvious exception of The Body Shop — in the same place one find’s Crass’s roots: in anarchism… Incidentally, on March 17th, 2006, Dame Anita Roddick’s The Body Shop (Roddick was knighted in 2003; see also Sir Bob) agreed to a £652 million takeover offer by L’Oréal, the French cosmetics group. Punk rock or what?]

Penny Rimbaud, a founding member of Crass, has long been perplexed by the band’s whitewashing from history, though not surprised. He can reel off a list of reasons as long as his arm why this may be, but their stance on promoting “product” is one that recurs. “We weren’t part of the normal outlet, by which we weren’t feeding the corporate body,” he says, referring to Crass’s refusal to sell merchandise and habit of printing frighteningly low “pay no more than” prices on their records. “For example, we didn’t do interviews with the mainstream press, believing that if we did them with the home-made fanzines then people would have to buy them.”

Because of this attitude towards the press, scathing reviews of their records were the norm and sniping at their “hippie” politics was de rigueur. The likes of Tony Parsons and [the populist if not-exactly-popular tabloid hack] Garry Bushell took exception to their black “uniform” (worn on stage and off), lack of class politics and their pacifist leanings.

To which Crass memorably responded by way of ‘Hurry Up Garry’:

Pick your nose with your ball pen,
Put your snot in Sounds,
Back to your playpen with your street cred minds!
You whimper and whine from the pages of the press,
Ridicule and criticise those who want to change this mess.

There’s people our here who are trying to live,
People who care, now, what do you give?

So many parasites living off our sweat,
So many fuckers in for what they can get,
Punk ain’t about your standards and your rules,
It ain’t another product for the suckers and the fools.

You sit behind your type-writers shovelling shit,
Rotting in the decadence of your crap-lined pit,
Waiting for the action so you can grab a part,
But it stinks so bad, who’s going to smell your fart?

“CAN YOU PUT ME ON THE GUEST LIST?
IS THERE ANY FREEBIE DRINK?
I CAN’T WRITE UNLESS I FEEL WELL PISSED.”
Piss off, you fucking stink.

On their records, Crass struck out against left-wing totems such as Rock Against Racism [which they described as “white liberal shit”, not “left-wing”], as well as the rise of the far right. As a result, they were perhaps the only band to be more widely despised than the [bonehead] group Skrewdriver.

[“We even played a Rock Against Racism gig, the only gig that we’d ever been paid for. When we told the man to keep the money for the cause, he informed us that ‘this was the cause’. We never played for RAR again.”]

Their record sales, however, never suffered. The Crass Records label could put out awful recordings of poetry or compilations of rough demos sent to the band by hopeful fans, and still have black-clad punks flocking to the record shops on the day of release. The label’s biggest commercial claim to fame was launching Björk in the UK – it released two albums by her pre-Sugarcubes band Kukl.

The slavish loyalty of Crass fans provoked suspicion, with comparisons being drawn with religious cults and even the Khmer Rouge. And, indeed, various shady organisations were drawn to the band. “Everyone tried to recruit us as a promotional unit, from the IRA to what was left of Baader-Meinhof,” says Rimbaud. “We used to pick up unbelievable amounts of information about anything and everything you can imagine.” So much so, that the British security services started to take an interest. 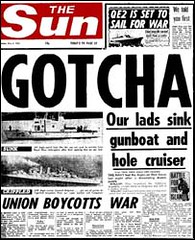 On one occasion during the Falklands conflict, the band heard a rumour that a battleship, HMS Sheffield, had been willingly sacrificed by the British government in order to protect HMS Invincible, on which Prince Andrew was then serving. In response, Crass created a fake taped telephone conversation between Ronald Reagan and Margaret Thatcher discussing the matter. This recording was sent out anonymously to newspapers, and before long it surfaced in the US state department, which denounced it as the work of the Kremlin. The KGB was so impressed by the stunt that it, too, tried to recruit the band members. But they simply drank the free vodka and played dumb.

Crass imploded in 1984 mainly because this Orwellian sell-by date had been counted down by their record catalogue numbers (621984, 521984, and so on). [Actually, the group ended in accordance with its stated intentions and following Andy Palmer’s withdrawal. In fitting fashion, their final gig took place on July 7th, 1984 at Aberdare in Wales: a benefit for striking miners.] Now, in a long-overdue attempt to give the band the recognition it deserves [well yeah; that’s one way of putting it], erstwhile teenage fans of the band have written two books – The Story of Crass by George Berger and The Day the Country Died by Ian Glasper. “They walked it like they talked it,” says Glasper. “And they split at just the right time, before they could begin that inevitable descent into self-parody that befalls any extreme band. I think that’s why their memory has endured ever since. They changed many lives, and it’s safe to say they remain the most profoundly important of all punk bands.”

Yeah, probably. Their music could often be horrible, but that’s part of its appeal, really. They was certainly making ‘stencil art’ — in approximately the same sense in which they produced ‘music’ — 25 years prior to its latest incarnation; which, unfortunately, all too often serves merely as a colourful backdrop to urban yuppie lifestyles the world over: Melbourne in particular. More important, perhaps, is their legacy of a combination of musical, commercial and political integrity, a model which thousands of other have adopted, and which is constantly at war with the chickenshit conformists who would like ‘punk’ to (re-)assume its supine position in the face of the culture industry. 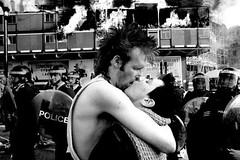 I live in Melbourne, Australia. I like anarchy. I don't like nazis. I enjoy eating pizza and drinking beer. I barrack for the greatest football team on Earth: Collingwood Magpies. The 2023 premiership's a cakewalk for the good old Collingwood.
View all posts by @ndy →
This entry was posted in Anarchism, Art, Film, History, Music. Bookmark the permalink.

3 Responses to The Continuing Appeal of Crasstafarianism