Nationalist Alternative : “just a bunch of students from Melbourne”

Dung is a great supporter of mushrooms. The dung heap known as White Nationalism has thrown up another: ‘Nationalist Alternative’.

A NEW group opposing immigration from Asia and the Middle East has jumped on the controversy surrounding Indian students in Australia, blaming Sydney’s inner-city rental crisis on the overseas student industry.

The Nationalist Alternative has left leaflets around Sydney University and other city campuses offering a “pro-Aussie movement” assistance in obtaining a lease on inner-city digs, and arranging collective houses to break free of real estate agents renting to the highest bidder.

“Local students are totally marginalised in the struggle for increasingly scarce resources, including accommodation and casual work,” said the group’s spokeswoman, Carla O’Hara.

“This effectively means they are being forced out of their traditional living space in the pursuit of Australia’s third-largest export: education. This is the white elephant standing in the room no one is willing to address.”

The group’s campaign comes as a top-level delegation from Australia visits India to mitigate the controversy that threatens to take a heavy toll on Australia’s education business.

Ms O’Hara said the Nationalist Alternative wanted to secure leases on behalf of students to cut out real estate agents and reduce costs to inner-city landlords and tenants.

“Many Aussies are increasingly finding themselves outmanoeuvred and ousted from an ultra competitive, inner-city rental market. Forced into unsuitable accommodation, including squats, the idea of plentiful, cheap, and geographically close student accommodation is as dead in the water as a free university education,” she said.

The University of Sydney was unaware of any extraordinary crisis facing students seeking accommodation. University authorities had not received any complaints about the leaflets.

However, Olivier Pollet, a Frenchman studying journalism at the University of Technology, said it was rubbish to blame the accommodation crisis, if one exists, on foreign students.

“This is actually the opposite of how the system of real estate works. I can assure you that coming from overseas makes it much harder to find a place, as you always need to show references, which you do not necessarily have in Australia, in order to find a tenancy,” he said.

The Nationalist Alternative started a Sydney branch two weeks ago. Its members said the campaign would move to Melbourne and other Australian cities.

In the past few days the Nationalist Alternative’s Sydney leaflet campaign had been given large play on websites bearing words like “white pride world wide” and “Aryan pride”.

1. The reference to ‘websites bearing words like “white pride world wide” and “Aryan pride”‘ is presumably a reference to sites like Stormfront, New Right, Skadi and enresist. On June 14, ‘White_Australian’ excitedly announced the group’s existence to the anti-Semites on SF, noting that “They seem to have some interesting articles and stickers/posters [and] images. It also appears they are happy to employ the black-bloc look employed by Autonomous Nationalists around Europe, particularly in Germany.” On May Day 2009, ‘Autonomous Nationalists’ in Hamburg — with a little help from German police — attacked a trade union rally.

3. The natalt.org site is down for the time being, but on July 1 it published an article titled ‘Can’t get a lease on an inner city place?’ by ‘Carla O’Hara’ and ‘Brian Hudson’. It is from this article that Damien Murphy quotes (“The Sydney branch of Nationalist Alternative is currently engaging in a campaign to reach out to help young Australians in the dire predicament of finding and securing a lease on inner city accommodation…”).

4. On June 26 the numpties published ‘Localised Failure of Liberal Democracy and opposition to the Newport Mosque’, outlining their activities in opposition to the construction of a mosque in the Melbourne suburb of Newport:

NatAlt was able to build good relations with the group and with certain key members. As many of the residents are politically inexperienced and often don’t appreciate the deeper underlying issues, it was encouraging to hear people express their thoughts and show us that people are not apathetic and do have an awareness of changes occurring within their community.

In response to this, NatAlt chose to lend support to one resident from a[n] action group who chose to be a candidate. NatAlt distributed a flyer advertising the council[‘]s decision and detailing how the council appeared committed to approving the mosque regardless of the resident[‘]s wishes, or [sic] without any concern [as] to how this would impact the area. Not only was the flyer one to inform residents, it was a call to kick the incumbents out and an endorsement of the community activist who was running for council.

Despite the sensitivity of the issue and the propensity for people to be critical of community members who express concern over such developments, NatAlt recieved [sic] negligible opposition to our efforts. We will continue to play an active role in this issue and help represent the understated and often ignored wishes and concerns of the local community.

Assuming the story to be true, NatAlt gave its support to one of the several dozen losing candidates for election to Hobsons Bay City Council. This may well have been Barbara Johnstone, who contested the Williamstown North Ward on behalf of the ‘Newport West Action Group’, gaining 705 votes and third place. (“Submitters (117 individual submitters) identifying themselves as part of Newport West Action Group (NWAG) represented by Mr Chris Taylor of Planning & Property Partners Pty Ltd and Ms Rebecca Parry” appeared at a Panel hearing into the mosque in June/July 2008. See : Hobsons Bay Planning Scheme Amendment C58 and Permit Application PA0613422, September 2008 [PDF]; Mosque plan flicked on, Hamish Heard, Star, May 20, 2008.)

Unlike similar campaigns in Sydney, the campaign to Stop the Mosque! in Newport does not appear to have generated much heat; that said, according to the Leader article, it did provide an opportunity for the Australian Protectionist Party to leaflet the area in an attempt to drum up anti-Islamic feeling (and a little publicity). The APP’s most recent brush with fame came courtesy of racist dingbat and former DJ Terrie-Anne Verney. APP also participated in a successful campaign to block the construction of an Islamic skool in Camden (NSW). The campaign served as the launching pad for the presumably rather brief political career of local Kate McCulloch, who after having her head displayed prominently on TV has opted to join the train-wreck known as the ‘One Nation Party’. 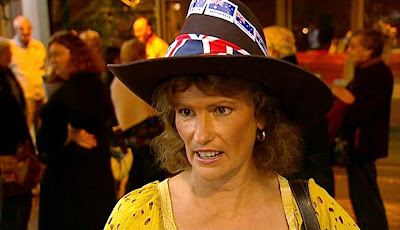 6. NatAlt drew lessons from their participation in this failed campaign, as the following mangled sentence suggests: “We could have attended and simply hit the area with purely abstract political material, replete with esoteric political though[t] straight out of a European think-tank and dressed in the black bloc look of our fellow nationalists in Europe from where we in Australia adapt the look.” This is by way of contrast to when the seven or eight NatAlts decided (‘Westgate Bridge Clean Up’, May 21, 2009) to do what nutzis in the US have done and done a little roadside cleaning (see : Road cleaned by neo-Nazis may be named for rabbi, Maria Sudekum Fisher, AP, June 21, 2009: “KANSAS CITY, Mo. (AP) — The state’s litter prevention program got an unusual ally last year: A neo-Nazi group adopted a half-mile section of highway in Springfield and picked up the trash…”). 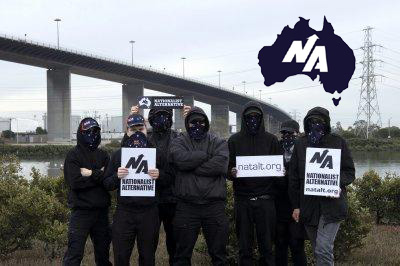 7. Finally, NatAlt make reference to the fact that “In 2009 [sic], Melbourne University students with no alternatives for accommodation resorted to squatting, only to be faced with eviction [that is, were evicted] by the university“.

8. Like their comrades the ‘national anarchists’, the ‘Nationalist Alternative’ are hereby invited to wish in one hand, to shit in the other — and to see which one fills up first.

I live in Melbourne, Australia. I like anarchy. I don't like nazis. I enjoy eating pizza and drinking beer. I barrack for the greatest football team on Earth: Collingwood Magpies. The 2023 premiership's a cakewalk for the good old Collingwood.
View all posts by @ndy →
This entry was posted in Anti-fascism, Student movement and tagged Nationalist Alternative, whiteness. Bookmark the permalink.

27 Responses to Nationalist Alternative : “just a bunch of students from Melbourne”