…is a really cool “political photoblog from Chile, created to show to the universe stories about repression, resistance and struggle of people in this little part of the world and the paths they take to find social justice”.

Santiago de Chile. In the morning of September 26th, special forces of the police broke into a squatted house located downtown, and six people, including a compañero from Spain, have been detained. Police say that molotov bombs and all the stuff required to prepare them were found in the place. Empty bottles (who doesn’t have empty bottles at home?), kerosene (some of the people were jugglers and of course did fire juggling), sawdust (used for beds that the [black] cats in the house had), and of course “subversive material”: zines, posters, banners, books, and videos and printed instructives to make molotov bombs. 4 bombs already made were found, according to the local CSI, who were there too. All the four bombs were supposed to be used in the protest organized for that day by the National Association of Teachers and High School students’ organizations.

This is [an] intelligence operation directed by the Vice-President himself together with the [ANI (National Intelligence Agency)], a quite dark institution that resembles the ones that operated during the fascist dictatorship of Augusto Pinochet. Of course, this is just one part of the operation, they have been filming during protests, investigating activist groups, infiltrating grassroots movements. For the part of the media, we suddenly start to hear and see on television that “anarchists” or “anarchic groups” are responsible for all kinds of destructive actions during protests. This year has been tough for the public image of anarchists in Chile. What used to be “infiltrators” in protests, are now identified as “anarchists”, which is, at least in the mass media, new.

Speaking of anarchists, media and protest, I’m looking forward to Nine‘s exclusive and breathless commentary on the upcoming G20 protests tomorrow. For a preliminary sample, see ‘City’s tight squeeze’, Mark Dunn, Sunday Herald Sun, October 28: “Demonstrators are threatening a repeat of the pandemonium that marred the World Economic Forum in 2000. Protesters, including professional agitators from interstate, have been training and running workshops and first-aid courses in Melbourne to prepare for street blockades and sit-ins. Police said they were prepared for violence.” Yadda yadda yadda: the usual. I just hope that the Professional Agitators* remember to bring their union cards with ’em. There could be some ugly demarcation disputes with the Anarchist Amateurs on the barricades if they don’t.

Below : Another anarchist clown… 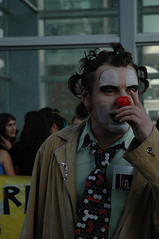 To suppress these criminals was surely just, for reasons that Palmer outlined in congressional testimony prepared by Hoover. The leaders of these pernicious movements, he explained [87 years ago, in 1919], included “idealists with distorted minds, many even insane; many are professional agitators who are plainly self-seekers and a large number are potential or actual criminals whose baseness of character leads them to espouse the unrestrained and gross theories and tactics of these organizations.” Any doubt of their criminality will quickly be dispelled by “an examination of their photographs”: “Out of the sly and crafty eyes of many of them leap cupidity, cruelty, insanity, and crime; from their lopsided faces, sloping brows, and misshapen features may be recognized the unmistakable criminal type.” And they are dangerous. “Like a prairie fire the blaze of revolution was sweeping over every American institution of law and order,” Palmer wrote, subverting workers, the churches and schools, even “crawling into the sacred corners of American homes seeking to replace marriage vows with libertine laws, burning up the foundations of society”.

…making Mark merely a part of a long and dishonourable tradition of red-baiting and yellow journalism.