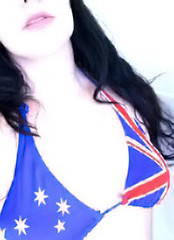 ‘Nationalist’ Australian clothing company True Blue Productions — which, while claiming to be “100% Aussie”, uses t-shirts manufactured overseas by Gildan Activewear* — is engaged in a guerilla advertising campaign called ‘The Great Australian Bikini March’. According to ‘Christine Hawkins’, “outraged Australian women and their male supporters will reassert Australian values by taking to the streets in a bikini march on… mosques on Saturday December 9, 2006”. In Melbourne, Christine claims that “the march will end at the Islamic Information & Support Centre of Australia in Brunswick, headquaters of Sheik Mohammed Omran“.

The march follows hot-on-the-heels of another attempt (by the same company) to cash-in on Sheik Hilaly‘s well-publicised comments likening women to ‘uncovered meat’:

WOMEN are being encouraged to “show the Sheik how things really are and Sheik your booty in this quality infidel clothing”.

An entrepreneurial Sydney man is cashing in on the controversy surrounding outspoken cleric Sheik Hilaly by flogging a range of “uncovered meat” t-shirts, aprons and g-strings.

Sold through US online site cafepress.com, the apparel [boasts] a pink cat embossed with the words “uncovered meat”.

Even if the event flops, which it will (who the hell wants to march to a mosque in a bikini?), it’s certain to draw attention to the fledgling business, contribute to economic growth, and be welcomed by all Right-thinking columnists.

*True Blue reckon Gildan Activewear sell fair dinkum ‘non-sweat’ apparel, the company having received the tick of approval from WRAP. In reality, the Worldwide Responsible Apparel Production Certification Program (WRAP) is an industry controlled initiative of the American Apparel and Footwear Association, and has little support or credibility among human rights, faith, women, labour or non-governmental organizations. Such initiatives take the lowest common denominator approach on labour standards to gain buy-in from all member companies, and provide no information to the public on where products are made or the results of factory audits.

I live in Melbourne, Australia. I like anarchy. I don't like nazis. I enjoy eating pizza and drinking beer. I barrack for the greatest football team on Earth: Collingwood Magpies. The 2023 premiership's a cakewalk for the good old Collingwood.
View all posts by @ndy →
This entry was posted in !nataS, Sex & Sexuality, State / Politics. Bookmark the permalink.