Win, lose or draw, Jeff “The Snowman” Monson is a fuckin’ champ… 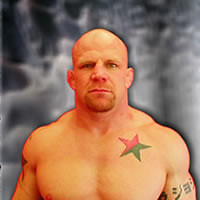 These days, each interview begins the same for Jeff Monson. Every one, without fail, starts with a question about the 11 inch height discrepancy between the 5’9″ Monson and his 6’8″ opponent this Saturday [November 18], UFC heavyweight champion Tim Sylvia. That can get tiring.

“Oh my God, I’m very tired,” he chuckles. “It’s the first question everybody asks. It’s like they have a sheet out and it’s the same question over and over.”

So. I guess I’ll have to re-phrase a bit. Is fighting an opponent close to a foot taller for the heavyweight championship much ado about nothing?

“No, it’s definitely something,” admits Monson, whose height hasn’t stopped him from compiling a pro MMA record of 24-5 that includes a 16 fight winning streak. “If he (Sylvia) didn’t use it to his advantage, then it wouldn’t be that big a deal, but he’s good at keeping people away and striking [at?] them, so it’s definitely a task, but it’s something where if I’m in tight, it could be to my advantage to be shorter.”

Then, if Monson can get inside and nullify Sylvia’s long distance striking, it’s anybody’s fight, since The Snowman‘s speed and world class grappling can then have a chance to be displayed. Have his advantages been ignored while Sylvia’s strengths are amplified?

“I think some people realize it and some people don’t,” said Monson. “It’s one of those things where who knows what’s gonna happen in a fight. I’ve just prepared well and I’m sure he’s prepared well, so I’ve just got to take the fight where my strengths are and I think the winner will be determined by where the fight plays out more.”

It’s a simple deduction, but then again, a lot of aspects of the fight game which seem complex can be boiled down to simpler terms when two fighters of a high level clash, and many times, the difference between winning and losing can come down to who ran the extra mile or who is on point mentally once the bell rings. In this case, it may come down to who had the better camp – Sylvia with Iowa’s famed MFS Elite squad, or Monson with Florida’s highly regarded American Top Team. Monson agrees that when it comes to his success, his training team plays a huge role.

“There’s really no secret,” he said, when asked how he’s been able to stay at a high level in a fickle sport like MMA and win 16 fights in a row. “It’s just hard work, forgetting about ego. I’m working with a great team in American Top Team, and I’m put in a position where I’m getting beat up, kicked, punched, or submitted in practice all the time, so it makes you better. That degree of skill and aptitude in the room just makes you better.”

Like most mixed martial artists, Monson is quick to deflect praise from himself while humbly giving credit to others for his success – something you rarely see in other sports, where it’s always ‘me, me, me’. In the culture of this sport though, it’s very team-oriented – despite the fact that the athletes compete alone – and even those who are fighting each other have an odd respect and camaraderie. It’s just another way the stereotypes of prizefighters are being shattered each time people get to interact with or listen to them.

Take Monson for example. As imposing as the tattooed heavyweight title challenger may appear, he is a holder of Master’s and BA degrees in Psychology, and is one of the most – if not the most – politically active athletes competing today. Yet his anti-war stance has drawn fire in the past, and even recently, Saturday’s opponent, Sylvia, told FoxSports.com‘s Dave Doyle, “He (Monson) disrespects our soldiers and our country and our President. I’ve been out to talk to soldiers and they deserve all the support they can get. I want to go out and teach this guy a lesson.”

Monson begs to differ though.

“Everyone knows I’m against the war, but hopefully I can win and use it as a platform to say let’s come together and support our troops in a way to get them home, and take care of one another and use our money for education and that type of thing, instead of necessarily bashing certain institutions or people in government,” he said. “I want to promote a positive message.”

There was also a class component to the Democrats’ victories. About half of all voters said they had just enough money to continue at their present standard of living (otherwise known as living a paycheck or two away from poverty), while one-fifth said they were falling behind financially…

“I think people are more receptive to it, but the thing I think though is that a lot of times – and everybody’s different – if you have someone who goes to work for 40 hours a week, comes home, watches a little TV, puts the kids to bed, and all that, they probably want to hear a more positive message. I just want to send a message that we can do this thing ourselves. Let’s put the pressure on and get together, not to just focus on this one guy, but on the fact that we want our soldiers home. Let’s support them that way.”

It’s not what you usually expect from a pre-fight interview, but then again, that’s precisely the point that was made a few paragraphs back. These guys aren’t strictly about what happens during competition, and the various views and interests of each athlete in the sport is what makes it worth covering.

“I know the guys on my team are really smart individuals that have a lot of good things to say and I’m not talking about things in support of what I’m doing, because I haven’t talked to a lot of fighters about these issues,” said Monson. “But I know there are a lot of smart guys out there that have families and careers outside of fighting, and to be able to show that we’re not just gladiators or fighters out there entertaining is a good thing. We do have other parts of our lives that are important. So if I can contribute in some way to that, even in a little way, I think that’s good. I know a lot of guys are involved in charities as well, and there are a lot of standup guys. I have a friend with cancer and a lot of guys came forward out of the woodwork, signing shorts and offering support – guys I had never met, some I did know, and there was really a lot of support and it touched me and touched him. A lot of people don’t know that, and we’re real people and have real concerns and if I can contribute in some way to get the guys known as more than just fighters, then I’m all for that.”

The mainstream has responded, with Monson making a recent appearance in Rolling Stone magazine [the 2006 ‘Hot List’?!?] and appearing on a talk show with Audioslave‘s Tom Morello and System of A Down‘s Serj Tankian.

“It’s just part of the job really,” he said. “I do like talking to people and I’ve got to meet a lot of different people, and you get to talk about other things besides just fighting, which I like. So it’s been a good experience.”

Now all he has to do is win the UFC title on Saturday night and his journey will be complete. Or will it? Don’t bet on hearing that from Monson, who admits that he’s “never satisfied.”

“It means a lot, but a lot of it is what people put on it,” said Monson of winning the belt. “To be the UFC heavyweight champ would be a dream come true – it would be great, and it’s not just another fight, but in a way it is just another fight and it’s an event that I don’t want to lose. I can go to the NAGA and have four little matches against guys I don’t know, but I don’t want to lose there either. This is the same thing and I don’t want to lose and I’m gonna do everything I can to prevent that from happening because I can’t deal with losing. It’s big, but I try to keep it in perspective.”

I live in Melbourne, Australia. I like anarchy. I don't like nazis. I enjoy eating pizza and drinking beer. I barrack for the greatest football team on Earth: Collingwood Magpies. The 2021 premiership's a cakewalk for the good old Collingwood.
View all posts by @ndy →
This entry was posted in Anarchism. Bookmark the permalink.