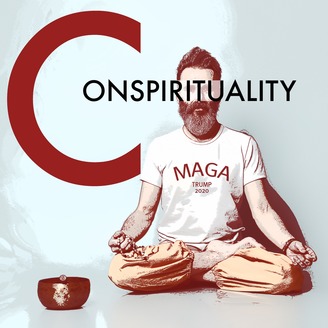 On this week’s episode of Yeah Nah, we talk to Matthew Remski [Twitter], a writer on meditation, yoga and cults for Walrus and the co-host of the Conspirituality podcast; ‘A weekly study of converging right-wing conspiracy theories and faux-progressive wellness utopianism’.

Matthew is the author of Practice and All Is Coming: Abuse, Cult Dynamics, and Healing in Yoga and Beyond and recently published ‘At This Point, Can QAnon Really Be Banned?; ‘A Facebook purge and Trump’s infection weakens QAnon but not the alt-health libertarians of ‘Soft-Q’’ (Medium, October 8, 2020). We spoke to Matthew about Nazi yoga, cult dynamics, the germ of ill-health in the wellness industry, and the merging of conspiratorial mindsets with new age utopianism.

*Please note that the podcast version of this episode [Apple, Spotify] contains a longer conversation with Matthew.

I live in Melbourne, Australia. I like anarchy. I don't like nazis. I enjoy eating pizza and drinking beer. I barrack for the greatest football team on Earth: Collingwood Magpies. The 2021 premiership's a cakewalk for the good old Collingwood.
View all posts by @ndy →
This entry was posted in Anti-fascism, Broken Windows, Death, History, Media, State / Politics, That's Capitalism!, War on Terror and tagged 3CR, Conspirituality, Matthew Remski, Yeah Nah Pasaran. Bookmark the permalink.