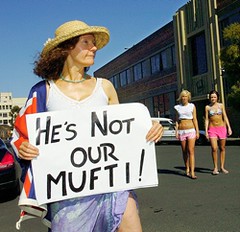 They Can Have My Bikini When They Pry It From My Cold, Dead Fingers…

BIKINI-CLAD women and their male supporters will take to the streets when The Great Australian Bikini March descends on a Brunswick Muslim [?] mosque next weekend.

The Saturday, December 9 march has been organised by Melbourne grandmother Christine Hawkins as a peaceful protest against recent reported comments by Sheik Mohammed Omran and Sydney Mufti Sheik Taj el-Din el-Hilaly about the sexual assaults of women.

Ms Hawkins said the march was designed to “show our opposition and go home” and was not politically motivated.

The march will start at Brunswick’s Clifton Park in Victoria St at 2pm and progress to the Islamic Information and Support Centre of Australia at 19 Michael St, Brunswick, the headquarters of Sheik Omran.

“Our fathers and forefathers fought to have the freedom we enjoy now,” Ms Hawkins said.

“We do not want conflict with the Islamic community. Australians know how to be tolerant, but we will not tolerate the intolerable.”

Ms Hawkins said the protest had a serious message, but it was hoped to be a fun event, because “fun in the sun has always been an inherent part of Australian culture”.

Bikinis are encouraged on the day, but any swimwear, summer skirts, tops, shorts or sarongs were also appropriate, Ms Hawkins said.

“I am a veteran bikini wearer and I want my children and grandchildren to be able to do the same,” she said.

The article provides the following number for more details — 0404 790 393 — and requests that interested parties phone between the hours of 6 and 10pm.

While Hawkins has attempted to distance herself from ‘politics’, the sponsor of the march remains True Blue Productions, a local “Aussie” business importing sweatshop apparel from Honduras (by way of the USA). True Blue operates out of a PO Box in Endeavour Hills, an outer eastern suburb of Melbourne, while the True Blue website is registered to Chris Gemmell-Smith.

Hawkins’ “serious” message — sexism is bullshit — is obvious. What is less obvious is the reasons for her decision to combat sexism by marching on a mosque, in Brunswick, on the anniversary of the Cronulla ‘riot’.

Some may interpret it as a deliberate fascist provocation.

Hawkins’ attempt to position herself as an ‘apolitical’ Australian grandmother, one who (as is the natural prerogative of every Australian politician) invokes the sacrifices of previous generations of Australian men in order to preserve our freedom (in this case, to wear bikinis), may be both self-serving and nauseating, as well as slightly silly, but it — and the promise of ‘chicks in bikinis’ — helps to explain why the far right is attracted to her absurd expedition into the wilds of multi-cultural Melbourne. That, and the deliberate targeting of Muslims.

As many commentators have noted, John Howard’s humanitarian argument [for war] is even less convincing when one recalls how he won the last [2001] election. His newfound compassion for the people of Iraq — ‘There is no chance of normalcy in a nation where torture and rape and genocide and killing are standard practice‘ — was conspicuously absent from his view of those onboard the Tampa. In this contradiction, the Prime Minister shows that to justify his war all the distancing effects must be kept in place. These separations allow a politically safe recourse to the suffering of distant others while they make politically useful the ruthless control and hiding from view the suffering of more proximate others. In this we see Howard’s paranoid form of nationalism as the force that has displaced logic in his justifications. It explains the apparent contradiction of his past exploitation of populist xenophobia against his recent and deeply unpopular falling-in behind George Bush. Paranoid nationalism constructs the nation primarily as controlled territory, emphasising the border at the cost of community. The nation becomes a grouping bound by fear. In such an understanding of the nation, the views of the populace can only be heard when they speak the language of the borderland: exclusion, fear, control. When the people speak of community — inclusion, hope, cooperation — there is incomprehension on the part of the paranoid nationalist. The dominance of this paranoid discourse within the government can be seen in the complete absence of dissent within the coalition. But the evidence of massive anti-war rallies signals that the culture of fear has not displaced hope as the bond of community…

I live in Melbourne, Australia. I like anarchy. I don't like nazis. I enjoy eating pizza and drinking beer. I barrack for the greatest football team on Earth: Collingwood Magpies. The 2021 premiership's a cakewalk for the good old Collingwood.
View all posts by @ndy →
This entry was posted in !nataS, Anti-fascism, Sex & Sexuality, State / Politics. Bookmark the permalink.