All I want for Crassmas is a Satanic, Hollywood Nazi 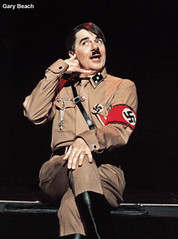 The US-based National Socialist Movement (NSM) is one of the more ‘entertaining’ neo-Nazi groups, so news that Kiwi fascists, in the shape of Sid “The Squid” Wilson‘s mob the New Zealand National Front, have decided to throw their lot in with the NSM makes for a very unusual — but deeply appreciated — Crassmas present. Then again, the NZNF do have a tendency to go out of their way: in October, the boys planned to have a rally at Wellington’s Cenotaph. Prevented from doing so by enterprising Kiwi antifa, NZNF Fuhrer Sid still managed to perform some terrific stand-up: “One day the National Front will be the government and we will be in that building [a local public toilet, presumably] and we will take the country back to where it should be: a place of peace and happiness” he barked at his flock.

But what of the NSM?

In June, the NSM (est.1974) were reckoned to be the largest neo-Nazi grouping in the US. In July, the NSM underwent a minor crisis following the resignation of Virginian slumlord und NSM Fuhrer (‘media liaison’) Bill White over the involvement of members of the group’s leadership in Satanic activities (The Joy of Satan). According to Alexander Zaitchik (‘Nazis Falling’, Intelligence Report, No.123, Fall 2006):

It couldn’t have been scripted any better in Tinsel Town. After surging ahead of the sieg-heiling pack in membership and notoriety, the “Hollywood Nazis” of the National Socialist Movement have imploded in a debacle featuring hate-radio jocks, anti-racist provocateurs, superhuman egos, allegations of underage sex, and Satan.

The party’s problems began last June, when Citizens Against Hate discovered that NSM’s Tulsa post office box was shared by The Joy of Satan Ministry, in which the wife of NSM chairman emeritus Clifford Herrington [Andrea Herrington a/k/a Maxine Dietrich] is High Priestess. Knowing that NSM ally and hate-radio host Hal Turner was a Catholic-raised convert to the white supremacist theology of Christian Identity, the anti-racist group decided to plant a metaphorical banana peel under NSM’s unsuspecting jackboot…

Prior to this incident, at a ‘Nordic Fest’ in May, there was a violent confrontation between members of the NSM and unaffiliated boneheads. Apparently, the assembled boneheads were incensed by one Steven Boswell’s claim that ‘the movement would never be helped “by belonging to a social club where all we do is drink and shoot the shit every Saturday night”. He went on to say that Aryans “are far more stingy than Jews” in supporting their own cause, and then added that “our women are deserting us wholesale… because we are weak”.’

American Nazis are spreading their hateful message of white supremacy in New Zealand – and have set up two chapters here.

And the deputy leader of the National Socialist Movement last night told Sunday News he plans to set up multiple chapters of the high-profile US white power group across New Zealand.

“We want more chapters in New Zealand. I would like to see dozens of chapters,” Colonel Tim Bishop said.

The Minneapolis-based hate group – which uses Nazi Germany’s swastika – has branches in most US states and has spread to the UK, Sweden and South Africa.

“All these units will operate in their area. They operate within the (Minneapolis) headquarter’s unit, but they are able to operate … as their own entity.”

The National Front has been linked to racially motivated arson attacks – including the arson of a marae.

In December 2005, National Front members Jason Molloy and Ross Baumgarten were jailed for the vandalism of six Muslim mosques and cultural centres in Auckland.

The pair smashed windows and sprayed “R I P London” on the Muslim places of worship after the 2005 London terrorist bombings.

Bishop said Wilson was a sergeant major in the National Socialist Movement.

“That may sound like a low rank but we don’t give out ranks easily,” Bishop said.

“You get rank by joining, actively fighting for our cause, by preaching the truth and handing out literature.”

Bishop would not reveal details of the second Kiwi chapter, or numbers of New Zealand members.

“All that I will say is that every white New Zealander has a right to be proud of his heritage and his people,” Bishop said.

“We have doctors, lawyers all sorts of people in our organisation. Some of them – like myself – are proud to show their colours, others understandably like to stay in the background.”

Yeah, it’s like, real difficult for neo-Nazis to become senior members of far right parties. After all, it took Guardian journalist Iain Cobain three whole months to become the BNP’s central London organiser (‘The Guardian journalist who became central London organiser for the BNP’, Iain Cobain, The Guardian, December 21, 2006). One of Cobain’s more unusual discoveries was the fact that Simone Clarke, currently the principal dancer for the English National Ballet, is a member of the-party-what-don’t-like-all-them-immigrants-stealing-our-jobs. Murdoch’s The Times (‘BNP ballerina stumbles into the spotlight’, Jack Malvern, December 22, 2006) reports:

Ooops. Well, I do hope that Clarke enjoys her stay in Coventry.

2 Responses to All I want for Crassmas is a Satanic, Hollywood Nazi