Anarchism in America // The Free Voice of Labor

According to the blurb on the back cover, Anarchism in America (quoting Janet Maslin writing in The New York Times) is “an exceptionally lucid and interesting documentary”. I found it to be quite the opposite: confused, and largely dull.

Based on the travels of the two filmmakers Joel Sucher and Steven Fischler around the United States (in an RV), the film effectively collapses the distinction between anarchism and right-wing libertarianism, an almost-exclusively ‘American’ (United States) phenomenon. Thus Murray Bookchin (1921–2006) is featured, as is Mollie Steimer (1897–1980), but so too is Karl Hess (1923–1994) and a trucker named Li’l John, whose only claim to ‘anarchism’ is an (understandable) aversion to government regulation of his (independent) trucking business!

Footloose and fancy free, the two filmmakers appear to have assembled their cast of characters — which, in addition to the above, includes homesteader Mildred Loomis (?–1986) and poet Kenneth Rexroth (1905–1982) — on the basis of (bad) luck rather than (good) planning. And, presumably, in keeping with their thesis that there is something innately ‘anarchistic’ about the character of ‘Americans’; a legacy of the myth of the American Frontier.

The Free Voice of Labor, on the other hand, is wonderful. 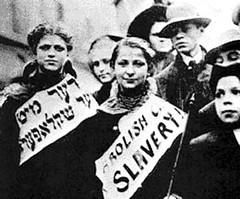 *Grim Reaper: Shut up! Shut up you American. You always talk, you Americans, you talk and you talk and say ‘Let me tell you something’ and ‘I just wanna say this’. Well you’re dead now, so shut up.

I live in Melbourne, Australia. I like anarchy. I don't like nazis. I enjoy eating pizza and drinking beer. I barrack for the greatest football team on Earth: Collingwood Magpies. The 2021 premiership's a cakewalk for the good old Collingwood.
View all posts by @ndy →
This entry was posted in Anarchism, Film, History. Bookmark the permalink.

1 Response to Anarchism in America // The Free Voice of Labor