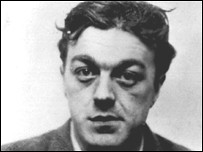 AFTER four decades in prison, a human rights group [?!?] is campaigning for the release of infamous cop-killer Harry Roberts.

Jailed for the murder of three police officers, Roberts is a man who would seem unlikely to garner much sympathy – but the Kennington-born prisoner has become a cult figure. RYAN KISIEL investigates.

COP killer Harry Roberts has become a South London cult hero even though he is one of the country’s longest-serving prisoners.

His name is regularly chanted at football grounds, has appeared in pop songs and is used by people to wind up the police.

A candlelit vigil was held outside Peckham police station in December to try to have the 70-year-old released before Christmas.

The “Let Harry Out For Christmas Campaign” was set up after the 10th anniversary of the day Roberts’s 30-year tariff expired.

Artist Mark McGowan organised the vigil with a dozen supporters.

He said: “Obviously he got sentenced to a minimum of 30 years and he has served 40. It seems as if it’s a political decision because he hasn’t had a parole hearing in 10 years. Whether or not we sing about it at football matches, there hasn’t been a hearing in 10 years. I grew up going to the terraces at Millwall and I was very familiar with who Harry Roberts was. I think the fact he has become a cult hero and a way that people can get at the police means that they don’t want to release him. Christmas is a time of forgiving and that’s why we decided to hold the vigil as we thought it was a time to let Harry out.”

Mark McGowan is one of the UK’s most exciting artistes. His many works include ‘strapping a 27lb turkey to his head and walking backwards for eleven miles, circumnavigating south and central London, while using a loud hailer, with one of those walkie talkies attached, through which he asked fat people to eat less crisps, chips, sausages, hamburgers, pizza and coke and to try to eat more salad’; ‘marching through the streets of Camberwell and Peckham with a solo trumpet player playing a sad lament and holding ten foot high bamboo sticks with little cocktail umbrellas on top before petitioning Southwark Council for ‘no sky’ on the grounds that it’s too big’; and ‘lying down on the pavement at the Elephant and Castle, and rolling on his side, down to Borough High Street, over London Bridge, the Monument, down Gracechurch Street, on to Bishopsgate, Liverpool Street, and down to Bethnal Green Road, then all the way to the other end, down a side street, then on to Old Bethnal Green road and the gallery’. 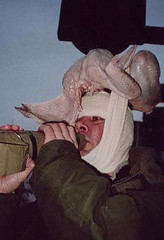 Born in Kennington in 1936, Roberts became infamous as the instigator of the Massacre of Braybrook Street when he shot dead three policemen in 1966.

Roberts and two accomplices were pulled over in East Acton after an armed robbery in Shepherd’s Bush.

PC Geoffrey Fox, Detective Sergeant Christopher Head and Detective Constable David Wombwell were all shot after Roberts feared they would find his handgun.

A huge manhunt followed and Roberts hid out in Epping Forest, Essex, and then headed for Bishop’s Stortford.

He was a soldier during the Malayan Emergency – a guerrilla war conducted by the Malayan National Liberation Army against British, Malayan and Commonwealth [including Australian] forces from 1948 to 1960. Roberts used the military skills he had learnt to avoid capture.

He was familiar with the Bishop’s Stortford area because he had spent part of his time there as a child evacuee during the Second World War.

Roberts eluded police for three months but was finally captured while he was sleeping in a barn at Blounts Farm near Bishop’s Stortford.

Convicted of the three murders, Roberts was sentenced to life imprisonment with a recommended minimum of 30 years.

Millwall FC historian Chris Bethell said: “Harry Roberts lived near to the club in Lambeth and some fans chanted his name as a way of winding up coppers. His name has often been chanted and he has some kind of local hero status to some supporters.”

Anarchists also adopted Roberts as a hero for killing policemen. His name features in anarchist band Chumbawamba‘s lyrics in Happiness Is Just A Chant Away.

The character of Billy Porter in the hit book He Kills Coppers [Soho Press, New York, 2001] by Jake Arnott is also based on Roberts.

This sub-culture of folk hero status is thought to have added to parole board and Home Secretary decisions not to release him.

In July 2005, he lost an appeal to the House of Lords over the use of secret evidence during his trial.

Currently in a low-security prison in Devon, he is considering appealing to the European Court of Human Rights to have his case heard.

One of Sgt Head’s surviving sisters, Edna Palmer, 83, said she “felt better” knowing he is being kept behind bars.

She said: “I don’t think anyone should be let out of jail if they have killed someone.”

When asked about the decision not to release Roberts, a Parole Board spokesman said: “With all life-sentence prisoners, the statutory test on whether or not to release them is whether it is necessary for the protection of the public that the prisoner be detained.”

Not unexpectedly, and despite the best intentions of the artistes concerned… ‘Police-killer denied parole after 40 years behind bars’ (Jason Bennetto, The Independent, December 29, 2006). See also A Chumbawamba FAQ.

I live in Melbourne, Australia. I like anarchy. I don't like nazis. I enjoy eating pizza and drinking beer. I barrack for the greatest football team on Earth: Collingwood Magpies. The 2021 premiership's a cakewalk for the good old Collingwood.
View all posts by @ndy →
This entry was posted in !nataS, History, State / Politics. Bookmark the permalink.