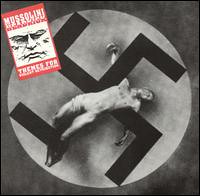 Fascist parties in the European Parliament have declared their intention to form a bloc on January 15, called “Identity, Sovereignty and Transparency (IST)”. According to the EUObserver: “Under EU rules, there need to be at least 20 MEPs from six different member states for a political group to be formed”; a prospect secured by the recent entry (January 1, 2007) of BULGARIA and ROMANIA into the EU.

The new kids on the block — Национален съюз Атака (National Union Attack, one member) and the Partidul România Mare (Greater Romania Party, five members) — are likely to be joined by:

Some of the political flavour of the new grouping may be found in The Guardian‘s report (Romania’s first gift to the European Union – a caucus of neo-fascists and Holocaust deniers, Ian Traynor, January 8, 2007):

In France, the group’s prospective leader [Bruno Gollnisch] has been barred from teaching at his university and is awaiting a court verdict for questioning the Nazis’ mass murder of Europe’s Jews.

Then there is the Polish professor [from the Liga Polskich Rodzin / League of Polish Families, nine members] who uses public office to pay tribute to General Franco, the late Spanish dictator.* Or the intellectual strategist of an Austrian party whose ideology, according to a Vienna court, is similar to that of Hitler’s “national socialism”.

“It is more a technical than a political group,” Alessandra Mussolini, the granddaughter of the upside-down corpse, told APA.

“We are mainly getting together out of necessity. Survival is only possible in a political group,” she added, referring to the fact that groups have a right to more funds and political positions in the European Parliament, something non-attached MEPs do not have.

On a brighter note, Jon Mooallem (Over My Dead Body, The Nation, October 19, 2005 (November 7, 2005 issue)), reflecting on the cultural and political uses to which celebrity corpses, such as those of Il Duce and Marliyn Monroe, are put, writes that:

Those who wanted to preserve Il Duce‘s majesty had their work cut out for them. The image of his capture was not a flattering one. He’d hidden under a blanket, disguised in a Luftwaffe overcoat, and was dashing off to Switzerland with purses full of several currencies — “not to mention his girlfriend,” one anti-Fascist noted, who “had stuffed precious stones into the seams of her underwear.”

Undermining Mussolini’s legacy, by contrast, wasn’t very difficult. Mussolini’s corpse was an emblem, after all, a hunk of bloated flotsam washed up as the political tide swiftly changed. Fascism and Nazism were in their death throes everywhere. An entire political system was being discredited and regretted. Luzzatto notes how the killing in Piazzale Loreto proved a canny perversion of Il Duce’s fervent mass rallies in Rome’s Piazza Venezia — an adoring mob now a vicious mob, the taunt of “Let’s hear your speech now” calling up his extraordinary prowess as an orator, and “a body attacked with fury both equal and opposite to the passion it inspired when alive.” After hanging there like a side of meat, Italy’s Ox was suddenly rumored to have been syphilitic, impotent and meagerly endowed between the legs. “When the leader dies,” Luzzatto writes, “the myths so vital in his lifetime are turned upside down; the charisma is transformed into a deep flaw.”

*Speaking of Poland, the Polish Prime Minister, and member of the virulently homophobic League, Jaroslaw Kaczynski — also the identical twin brother of Polish President Lech Kaczynski — was outed as a homosexual in major Polish media in October, 2006. According to The Gully (November 10, 2005):

Not to be surpassed by his twin brother, Party boss and presumed closet case Jaroslaw recently announced that “homosexuals should not be allowed to teach.” Earlier he had told the weekly Ozon: “The affirmation of homosexuality will lead to the downfall of civilization. We can’t agree to it.”

The source of the allegations regarding Jaroslaw’s homosexuality (and presumed desire to destroy ‘civilization’), interestingly enough, is the same agency Bishop Stanislaw Wielgus once worked for: the (gasp!) Communist Secret Police (Służba Bezpieczeństwa Ministerstwa Spraw Wewnętrznych / Security Service of the Ministry of Internal Affairs). As is seemingly routine for members of the cloth, Wielgus first denied (December 21) ever having worked for the Polish Secret Police, but just a few weeks later (January 7, 2007) was forced to admit the truth and to resign his position as the newly-appointed Archbishop, especially as the evidence was both undeniable and — moreover — threatened the Church hierarchy as a whole. Since then, according to Craig S. Smith, writing in The New York Times (January 10, 2007), ‘In Poland, New Wave of Charges Against Clergy’:

Most researchers who have delved into the archives of the Sluzba Bezpieczenstwa, or Security Service, estimate that thousands of the country’s priests, monks and nuns at the time — as many as 10 percent of the total — collaborated with the secret police to some degree [but]…

Perhaps the most explosive assertion by people in the church is that the taint of collaboration was known for decades but kept quiet out of respect for — or perhaps even at the behest of — the Polish-born Pope John Paul II, who died in 2005.

Open your mouth, and speak up for the dumb,
Against the suit of any that oppose them; open your
Mouth and pronounce just sentence, and give
Judgment for the wretched and the poor.

I live in Melbourne, Australia. I like anarchy. I don't like nazis. I enjoy eating pizza and drinking beer. I barrack for the greatest football team on Earth: Collingwood Magpies. The 2023 premiership's a cakewalk for the good old Collingwood.
View all posts by @ndy →
This entry was posted in !nataS, Anti-fascism, History, Sex & Sexuality, State / Politics. Bookmark the permalink.