Jared Taylor: Speak to the hand 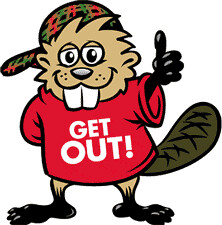 Poor old Jared Taylor. A notorious racist who (somewhat like the scientician J Phillipe Rushton) masquerades as a ‘race relations expert’ and scribbles for American Renaissance zine (among other activities), Taylor was once scheduled to enter into a ‘debate’ with David Divine at Dalhousie University on January 15: ie, MARTIN LUTHER KING JUNIOR DAY! Upon discovering the rather unsavoury nature of his debating opponent, Divine, The James R. Johnston Chair in Black Canadian Studies at the University, sensibly decided to scrap the event (Debater’s views too offensive for Dal: prof, CBC News, December 22, 2006).

This gave his dozens of fans on Stormfront (more) reason to cwy, but no matter: like Taylor, they’re notorious for being racist — ‘the Joos’ are Public Enemy Number One for the fascist twats who populate its diseased forums — and not-too-bright (as well as being vewy vewy sensitive). Undeterred, therefore, the rather s l o w Taylor persisted in making an unwelcome visit to the land of beavers, and brought his racial-surrealist, one-man comedy performance to the town of Halifax, Nova Scotia on January 16.

HALIFAX (CP) — Protesters have disrupted a speech in Halifax by an American who describes himself as a “race realist” but who critics say is a white supremacist.

Jared Taylor was pushed out the door of a downtown hotel room by a group of about two dozen people who opposed his presence. Police eventually led the protesters away, but Taylor never got to speak.

Taylor, who is with [ie, is editor of] American Renaissance magazine in Virginia, was originally supposed to debate racial issues with a Dalhousie University professor.

The university cancelled the debate after concerns were raised about Taylor’s background and beliefs.

HALIFAX (CP) – Shouting “Nazis aren’t welcome here,” a mob of protesters shoved a self-described “race realist” from a Halifax hotel conference room Tuesday night where he was about to give a controversial speech.

A couple of dozen people prevented Jared Taylor, who critics have described as a white supremacist, from speaking. Taylor, who argues against the mixing of races, insists he’s not a racist and doesn’t espouse hatred…

Taylor said he was surprised by the demonstration.

“I fully expected to make my remarks,” he said outside the conference room…

As I said: not-too-bright. Other reportage includes:

Note that this article seemingly contradicts others which claim that police did in fact attend the event (Taylor is quoted as expressing his surprise that Halifax police did not provide him with an escort). It also records the fact that: the word ‘fuck’ apparently took wings during the course of the altercation; Taylor wore “a conservative business suit, white shirt and tie” whereas the “room full of rowdies” “hid their faces behind balaclavas or bandanas”; and Jon Goldberg of the Atlantic Jewish Council in Halifax seemingly failed to take his own advice (“The best thing you could have done was to ignore the guy,” he is reported to have said).

In a supplementary article by the same journalist — Taylor: Racism protesters “contemptible” (January 19, 2007) — Taylor, described as “a Yale-educated journalist and author who believes in freedom of association” (while those who interrupted his address are described as “young foul-mouthed demonstrators”), apparently maintains that “racial diversity in Canada, just as it is in the United States, is an ordeal — an agonizing, never-ending ordeal”.

In many ways, then, Jared Taylor may be thought of as an Amerikkkan equivalent — one of a number clustered around the same small number of racist propaganda outlets — to local Australian, University-educated, middle class, white-collar racists such as Andrew Fraser. Incidentally, while Taylor is a Canadian import, Fraser is a Canadian export, who claims that his original attraction to Australia was that it was allegedly populated exclusively by ‘sun-bronzed, blonde, blue-eyed’ people, the supposed virtues of this group often articulated as the ideology of ‘Nordicism’. Not exactly cutting-edge stuff, but the basis for many violent racial outrages. For example:

Progressive-Era America responded with hostility to most immigrants; however, Italians were at the “very bottom rung” because of the “Nordicism” that dominated American social thought. [Nunzio] Pernicone [author of a fascinating biography of Carlo Tresca: Portrait of A Rebel] testifies that Anglo-Protestant Americans often regarded Southern Italians as non-whites, as evidenced by at least 39 reported lynchings of Italians in the United States. Both Sacco and Vanzetti suffered the insults and indignities of this particularly racist period; but they adjusted rather differently to American life…

Curiously, an editorial in Halifax’s Daily Herald invokes the memory of Frederick Douglass (1818–1895) in order to denounce the actions of the two dozen or so protesters who shut down Taylor’s address. Thus:

On more than one occasion, pro-slavery protesters would attempt to stop Douglass from speaking. They would physically assault him, sometimes to the point where his life was in danger. He never allowed his enemies to intimidate him — or silence him…

In this sense, Douglass was ‘lucky’. Many others, however, were not. Included among them were Dangerfield Newby, Lewis Sheridan Leary, Shields Green and John Anthony Copeland, Jr, four members of John Brown’s legendary raiding party of 1859, executed alongside Brown. On his way to the gallows, Copeland Jr was heard to remark: “If I am dying for freedom, I could not die for a better cause — I had rather die than be a slave!” And of course, many blacks did die, and not only as slaves, but also as ‘free citizens’: wage slaves.

According to one source, sixty-one percent of all American slaves — nearly 145,000 — lived in (Taylor’s home state of) Virginia and Maryland, working the tobacco fields in small to medium-sized gangs. (Oh, and apparently a few people died on the way from Africa to America too.) 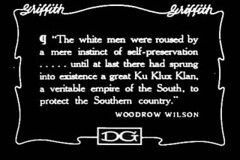 Not only did the protesters shout Taylor down; they also forcibly removed him from the hotel room. Police were called, and the demonstrators were dispersed. Later, Taylor managed to speak to a few people who did not take part in the protest…

But freedom of speech is not like a garment that can be donned or discarded at whim.

It is one of the bedrock principles of a free society.

Freedom of speech means that even odious opinions have a right to be heard. It also means those opinions are open to criticism.

Freedom of speech means that the demonstrators had a right to heckle and harangue, rebut and refute, question and contradict.

But it does not mean they had a right to commit assault.

Frederick Douglass would not have approved.

In an opinion piece in the same edition, David Rodinhiser writes:

In a way, Jared Taylor represents a far less dangerous form of discrimination – one that’s out in the open and obvious.

Taylor describes himself as a “race realist,” but most of us would probably consider him a “real racist.” His speech, had he had the chance to deliver it, almost certainly would have included offensive opinions.

While I suspect I would have disagreed with almost every word he would have said, I firmly believe he had the right to say them – unless he incited hatred, which would be up to the courts to decide.

The protesters who dragged Taylor from the room he booked at the Lord Nelson should have been charged with assault.

Many masked their faces with bandanas, like cowards and criminals. They compared Taylor to the Ku Klux Klan, but he wasn’t the one wearing the hood.

By not letting Taylor speak, the protesters only drew attention to his cause and fuelled others of his ilk. They should have let him discredit himself through the stupidity of his own words.

As Taylor, himself, argued: “If what I have to say is either wrong or loathsome, it should be very easy to refute.”

I’ll bet it would have been.

David Rodenhiser believes Taylor’s attackers are no better than the MLAs who shout down Paris when he speaks in the legislatures.

Notwithstanding the political issues at stake in this debate — freedom of speech and countering racism, among others — it is disingenuous to use Douglass’ life and work in this manner. In what is probably his most famous speech, Douglass said:

Let me give you a word of the philosophy of reform. The whole history of the progress of human liberty shows that all concessions yet made to her august claims, have been born of earnest struggle. The conflict has been exciting, agitating, all-absorbing, and for the time being, putting all other tumults to silence. It must do this or it does nothing. If there is no struggle there is no progress. Those who profess to favor freedom and yet deprecate agitation, are men who want crops without plowing up the ground, they want rain without thunder and lightning. They want the ocean without the awful roar of its many waters.

This struggle may be a moral one, or it may be a physical one, and it may be both moral and physical, but it must be a struggle. Power concedes nothing without a demand. It never did and it never will. Find out just what any people will quietly submit to and you have found out the exact measure of injustice and wrong which will be imposed upon them, and these will continue till they are resisted with either words or blows, or with both. The limits of tyrants are prescribed by the endurance of those whom they oppress. In the light of these ideas, Negroes will be hunted at the North, and held and flogged at the South so long as they submit to those devilish outrages, and make no resistance, either moral or physical. Men may not get all they pay for in this world; but they must certainly pay for all they get. If we ever get free from the oppressions and wrongs heaped upon us, we must pay for their removal. We must do this by labor, by suffering, by sacrifice, and if needs be, by our lives and the lives of others. 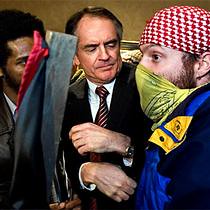 11 Responses to Jared Taylor: Speak to the hand