[Update, April 22: Still waiting on confirmation of the venue for the gig… In the meantime, The Observer has an article on Noel Martin, “A British construction worker who was paralysed from the neck down after being attacked by neo-Nazis near Berlin 11 years ago”, and whose autobiography has just been published in Germany (Kate Connolly, ‘Why I just can’t go on living, by victim of neo-Nazis’). Martin is from Birmingham, and The Birmingham Hotel in Melbourne was the venue for Blood Red Eagle‘s last gig on September 23, 2006: a commemoration of the death, in 1993, of Ian Stuart Donaldson, the English founder, in 1987, of Blood & Honour. Newcastle-based Douglas Schott, vocalist, BRE, is a leading member of B&H Australia.

Outside of one local Melbourne paper, The Melbourne Times, local media showed no interest in the story — despite an assault by a group of boneheads upon a lone black woman on the night of the gig — and the local Council, despite repeated requests, has done nothing to address the existence of a neo-Nazi venue in the area. Instead, a number of local ‘punk’ bands have and continue to show their support for the venue by playing gigs there; the next gig being scheduled for ANZAC Day.] 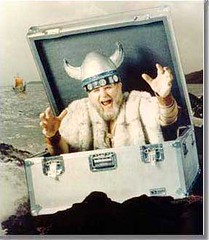 The plan has appalled Jewish and anti-racist groups but they say, though the event is offensive, it is not illegal.

The concert, organised by local branches of [bonehead] gang Hammerskins and neo-Nazi organisation Blood and Honour — which has been banned in parts of Europe — will bring Australian “[V]iking rock” band Blood Red Eagle [including vocalist Douglas Schott] to play in Wellington tonight. Adolf Hitler was born on April 20.

It is understood the gig was scheduled to play at the Berhampore headquarters of motorcycle gang Satan’s Slaves, but Hammerskins this week announced a secret venue change “due to differences”. Sources believe Satan’s Slaves may have fallen out with event organisers.

Race Relations Commissioner Joris de Bres said the plans, while offensive to many, were not illegal. “Mercifully, there aren’t many people in New Zealand happy to celebrate Hitler’s birthday. I don’t think it’s going to be a very big party.”

Wellington Jewish community leader and Israeli honorary consul David Zwartz said it was “distasteful and offensive”, but racism was an unfortunate part of many Western societies now. “I think that will just continue as long as there are some people who live with the obsessions that these people have, which are racist and hateful.” Anti-racist groups are also appalled at the move.

“I find it disturbing that people belonging to two organisations internationally known (and even banned) for inciting race hate and committing attacks and murders should be organising here,” one campaigner told The Dominion Post.

Wellington police said they were aware of the event, but were not expecting any trouble.

Also : Band celebrates Hitler’s Birthday in Wellington, TV3, April 21, 2007; a report which erroneously claims that BRE is “banned in parts of Europe” — thus confusing Douglas Schott’s Newcastle-based band with the international neo-Nazi network Blood & Honour, which is currently banned in Germany and Spain, and faces a potential ban in Belgium and Holland. That said, Douglas Schott is the leading member of B&H in NSW.

Note that the proposed ban on B&H in Belgium was prompted by one of its members going apeshit with a gun and shooting a black woman and a white baby to death in Antwerp in May 2006, followed by the discovery by Belgian police of an arms cache belonging to the group in September. Note also that the bonehead organiser of last year’s Wasted Festival (an international ‘punk’ fashion franchise), Fiona Walsh, is a part of the same neo-Nazi networks as Schott and the boys, and happily sells both anarchist (Oi Polloi) and RAC (‘Rock Against Communism’/neo-Nazi) product through local distro Deadshit Muzak.

I live in Melbourne, Australia. I like anarchy. I don't like nazis. I enjoy eating pizza and drinking beer. I barrack for the greatest football team on Earth: Collingwood Magpies. The 2023 premiership's a cakewalk for the good old Collingwood.
View all posts by @ndy →
This entry was posted in Anti-fascism, Music, State / Politics. Bookmark the permalink.