Following unruly protests and approximately 250 arrests at a NATO Summit in Oslo, Norwegian authorities have raided Blitz, the squatted social centre. According to one account (The Norway Post), on Thursday evening (April 26): 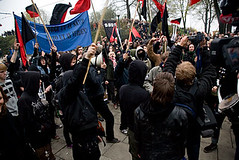 Apart from anything else then, and leaving aside the question of the accuracy of the above account, the NATO Summit is obviously providing Norwegian authorities with an excellent opportunity to smash Blitz, the autonomous counter-cultural centre in central Oslo which for over 20 years has been ‘fighting oppression, government control, cultural commodification and social pacification’; much to the annoyance of local authorities. (The protests themselves also allegedly caused at least one local Marxist pipsqueak — Oslo’s Mick Armstrong, one presumes — to denounce Blitz and all its works.)

Aftenposten, another Norwegian paper, gamely tries to make the most of the police raid, headlining its article ‘Explosives found in Blitz raid’: “Police say radical youth organization Blitz intended to use explosives in connection with the ongoing NATO meeting in Oslo”, police also confiscating 70 crates full of rocks and fireworks (for the benefit of waiting media). Of course, one fact not mentioned in this account is that Blitz doesn’t just fight visiting war criminals, but local fascists too, and the 70 crates of bricks and rocks were kept primarily in the event that local boneheads wanted to practice their heading. Which prospect would no doubt perplex a number of local Melbourne punks, who think that neo-Nazis should in fact be welcomed into our communities, and their venues actively supported — not boycotted — and defended — not torn apart…