Today, I saw a dog,
Yes, a dog.
Talking to a pig,
Yes, a pig.
They were on the pavement,
Discussing Trotsky.
Not brotsky or crotsky or drotsky or frotsky.
But Trotsky.

While he retains a largely loyal following around the world, possibly numbering in the hundreds of thousands (if not millions), Leon Trotsky (November 7, 1879–August 21, 1940) has contributed much moar to the world than a brief and ultimately unsatisfactory love object for undergraduate students.

Below I detail several ways in which Лев Давидович Троцький has left his mark on World History.

First and foremost, Trotsky gave unto the World the Spartacists, without whom there would have been no Michael Jackson.

Secondly, according to the Internets, ‘Trotsky Icepick’ was a Los Angeles post-punk band formed by Vitus Mataré and Kjehl Johansen in 1986, following the demise of ‘The Last’ and ‘100 Flowers’. Named for the murder weapon used to kill Mister T, the band’s first (?) release Poison Summer came out under the name ‘Danny and the Doorknobs’. Supposedly, the Doorknobs had performed for several years in nightclubs in the City of Angels, selecting a new moniker to go along with each performance.

Note to young up-and-coming pop *s: this made it extremely difficult for the group to build up any sort of following.

It was at a ‘Club Lingere’ — or possibly ‘The Abattoir’ — show that the quartet was subjected to horrific levels of feedback on stage during a performance. This caused Mataré to quip “THANKS FOR THE TROTSKY ICEPICK, DUDE!” to the errant sound man.

They picked this tag for the second (?) Poison Summer LP. A few days ago, I re-posted a short essay by veteran US socialist David McReynolds on ‘The Long Strange Posthumous Life of Leon Trotsky’ [clenched fist salute to Leftist Trainspotters]. This post was, in turn, linked to by Prose Before Hos: ‘A Blog On Economics, Snark, Politics and Policy’.

The issue of this synthesis are the following links:

Look at this fucking hipster

Note: not all hipsters are bad, mmmkay? 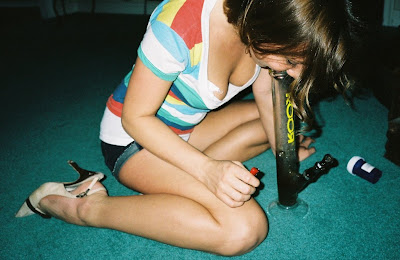 Leon ‘I said toothpick, not icepick!’ Trotsky, take a bow!

I live in Melbourne, Australia. I like anarchy. I don't like nazis. I enjoy eating pizza and drinking beer. I barrack for the greatest football team on Earth: Collingwood Magpies. The 2021 premiership's a cakewalk for the good old Collingwood.
View all posts by @ndy →
This entry was posted in !nataS, History, Music, Student movement, Trot Guide and tagged Hipsters, Not brotsky or crotsky or drotsky or frotsky. But Trotsky.. Bookmark the permalink.