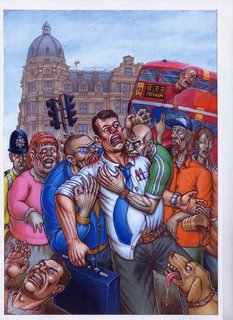 Below is an extract from Dennis Tourish’s essay on leftist political cults. It concentrates on examining the organisational methodology of “a prominent British Trotskyist grouping (variously known as the Committee for a Workers International, Revolutionary Socialist League, Militant Tendency – henceforth referred to as CWI)”, or in other words the British equivalent of the Socialist Party here in Australia.

Cults embrace the fields of psychotherapy, religion, new age, self help, business training – and politics (Hassan, 1988). Thus far, the latter area has attracted little attention. One reason may be that the frantic activity and intense feelings of party loyalty which often characterises political life makes it difficult to differentiate between ‘normal’ political involvement and that which qualifies groups to be regarded as a cult. This is particularly true of fringe political groupings, on the extreme left and right. This paper argues that the phenomenon of political cultism is more widespread than is normally assumed. In particular, it focuses on the ideological and organizational dynamics of left wing groupings which fall within the Trotskyist tradition, and argues that these predispose such groupings to cultic practices. Accordingly, those criteria which it is authoritatively agreed constitute diagnostic criteria for the classification of groups as cults are reviewed. This is then refined into specific criteria which are particularly pertinent to the activities of political groups. Flowing from this, a case study approach is adopted. A prominent British Trotskyist grouping (variously known as the Committee for a Workers International, Revolutionary Socialist League, Militant Tendency – henceforth referred to as CWI), which acquired significant political influence in the 1980s is discussed. Sources utilised in the study include interviews with ex-members, journalistic accounts, internal documents and open publications.

Members of the CWI had a long standing tradition of working within the British Labour Party, a policy known as ‘entrism’. It also, beginning in the early 1970s, built small groups of supporters internationally, including within the United States. By the late 1980s it controlled the British Labour Party’s youth wing (since dissolved), counted three Labour MPs among its approximately 8000 members, employed 200 full time staff, had a national headquarters in London, published a 16 page weekly newspaper, and led large movements on some issues which at times dominated the domestic British political scene. In short, the CWI became probably the most successful Trotskyist organization in the world since the 1930s.

However, a huge dispute erupted within its ranks during 1991 over whether to remain inside the Labour Party. This led to a split in early 1992, during which the organization’s original founder and many others were expelled. They instantly set up a new Trotskyist international, still committed to entrism. The CWI reconstituted itself as a new ‘open’ party named ‘Militant Labour’, since relaunched as ‘The Socialist Party’ in early 1997. The evidence is that both groups have since sharply declined, and that the remains of the CWI in particular may now number no more than a few hundred members. Its theoretical beliefs, organizational practices and the 1992 split are assessed in the light of the extent to which they match the criteria under discussion. The data is also reviewed from the standpoint of Lifton’s (1961) suggested criteria for what he termed ‘ideological totalism.’ Finally, the implications for the ideological underpinnings and organizational cultures of political organizations (particularly those on the left) are examined.