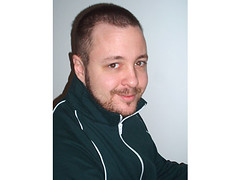 Daniel McGowan is an environmental and social justice activist. He was charged in federal court on many counts of arson, property destruction and conspiracy, all relating to two incidents in Oregon in 2001. Until recently, Daniel was offered two choices by the government: cooperate by informing on other people, or go to trial and face life in prison. His only real option was to plead not guilty until he could reach a resolution of the case that permitted him to honor his principles. As a result of months of litigation and negotiation, Daniel was able to admit to his role in these two incidents, while not implicating or identifying any other people who might have been involved. Judge Aiken sentenced Daniel to 7 years in prison on June 4, 2007.

I received my first phone call from Daniel tonight. This is the first opportunity he has had to reach out from MDC. Overall, he is doing OK. We only got to talk for 15 minutes so there’s not all that much to report.

He is currently in the medical unit which, as far as I’m aware, is standard for people when they first arrive and are being processed. Until he is out of this unit he will not have access to his commissary or be able to receive visits. As far as we know, he will only be able to receive visits from family at MDC. Once he reaches the prison he will serve the rest of his time in, he should be able to see friends too.

Daniel said he is eating and sleeping OK, but of course it’s nothing like home. He has been able to play a bit on the basketball courts and socialize with a few people.

As I was on the phone with him he received his very first pieces of mail and I could tell that made his day. When I first got on the phone with him he was a little down because he hadn’t gotten any mail. Please make sure to keep sending letters to him. Send notes about your life, about what’s going on in the world, news stories, gossip, whatever! ANY mail is better than no mail.

You can find mail guidelines here and his address below:

Thank you for keeping Daniel in your thoughts.

I live in Melbourne, Australia. I like anarchy. I don't like nazis. I enjoy eating pizza and drinking beer. I barrack for the greatest football team on Earth: Collingwood Magpies. The 2023 premiership's a cakewalk for the good old Collingwood.
View all posts by @ndy →
This entry was posted in State / Politics. Bookmark the permalink.