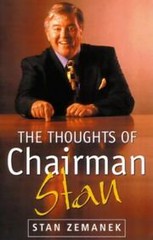 The military-industrial-entertainment complex has lost a true * today, radio philosopher and wit Stan Zemanek, dead at the age of 60 from a brain tumour. Fortunately, Stan’s illness was not a source of stress or anxiety, and it’s in that spirit that we should also view his death, as Stan himself explains:

“YOU’RE a lazy wuss,” Zemanek is saying to a 65-year-old man, who says that he lost his job because of stress. “I’ll say it again. There’s no such thing as stress!” Dr Stan has spoken. The whole stress concept has been fanned by doctors who don’t understand their patients, by lawyers who want to make a quick buck and by stressed people who don’t want to work…

Zemanek instantly tranforms from the 14th beast to a sympathetic shoulder. But he manages the change without ceding ground.

They continue to talk about the woman’s loss and Zemanek asks that she call him back soon to tell him how she is getting on. The woman says she will, and whispers a goodbye. She is even allowed a few last sniffled but defiant words: “There is stress.”

While some may have been surprised that Stan had a brain — I know I was, and so, apparently, was Stan — who can now deny that, while everyone else’s may be breaking, Stan had a heart, too? Although a heart perhaps not quite as big as, say, the red centre:

Later he gives me a signed copy of The Thoughts of Chairman Stan, which introduces me to the sentence “The Aboriginal industry want reconciliation, but they want it on their terms and as far as I’m concerned that’s not on and they can go and get stuffed.”

Zemanek dismisses accusations that he is racist. “Derryn Hinch once called me ‘a rancid, red-necked, racist, rooster’. Recently I had a reason to have him on my program and asked him why he’d called me (that) and asked him to tell me where I’ve ever made a racist comment. At the end of the line there was just dead air. He couldn’t think of one point where I was racist.”

Derryn Hinch thinks? I guess this means that he must have a brain too. Will wonders never cease? In any case, in addition to thinking, perhaps Derryn could’ve engaged in some research, as Paul Barry did some years ago, following news that a 15 year old Aboriginal boy committed suicide in jail after having been sentenced to a mandatory 28 days (in his case, for the crime of stealing pens, textas and paint). After recounting Howard Sattler’s joy at news of the deaths of several Aboriginal children as a result of a high-speed police chase, Barry notes that:

Howard is by no means alone, although his Sydney audience is still small. His fellow shock-jock Stan Zemanek, who has a TV show that describes him as the beast, also sees the world in black and white. And he’s now just down the dial from Howard in the same Sydney timeslot where he also thinks criminals need a good caning:

“In Singapore they give you six or ten or twenty rounds of the rattan, and I believe that’s also a good alternative… Maybe we should bring that in as well.” (Stan Zemanek, 2GB, 16/2/00)

Paul Barry: Stan also hates do-gooders and he’s ever ready to give them a serve:

Paul Barry: Like the owners of the textas perhaps.

I suppose the only good news is that, following Stan’s departure, The Herd may now relax as another rich prick cashes in his chips.

Wake up. This country needs a fucking shake-up
Wake up. These cunts need a shake-up
Talkback? Squawking hacks – won’t relax
until Jonesy, Zemanek and Laws are all axed
77 per cent of Aussies are racist
and if you’re here, I’ll say it to your faces
Rich, redneck pricks still hold all the aces…

I live in Melbourne, Australia. I like anarchy. I don't like nazis. I enjoy eating pizza and drinking beer. I barrack for the greatest football team on Earth: Collingwood Magpies. The 2021 premiership's a cakewalk for the good old Collingwood.
View all posts by @ndy →
This entry was posted in Media. Bookmark the permalink.

6 Responses to Another sad loss