Boneheads come in all shapes and sizes

In Melbourne, local punks claim that boneheads aren’t a problem, support their venues (that is, The Birmingham Hotel), and have accused me of being a weak coward, a “clueless cunt”, and the ideological equivalent of a neo-Nazi for claiming otherwise. In Wellington, three boneheads have recently been convicted of the kidnap, assault and robbery of a Canadian tourist, Jeremie ‘Little Wolf’ Kawerninski (Jeremie is indigenous Canadian / Coast Salish). Further, police claim that jurors were subjected to threats and intimidation during their deliberations.

Would the real punks and skins please stand up?

A threat to a juror considering the fate of boneheads who kidnapped a Canadian tourist is being treated as an attack on the justice system, amid revelations the case was dogged by earlier fears of intimidation.

The juror was discharged from the case on Friday, with deliberations to start that day, after finding a note outside his house bearing the words “Not Guilty” and a swastika. The 11 remaining jurors found Benjamin Peter McPadden, 19, Jaydon Russell Borland, 31, and Jason George Gregory, 20, guilty of kidnapping 26-year-old Jeremie Kawerninski in April last year.

The group took Kawerninski from central Wellington to Naenae in Lower Hutt, where they robbed him of $40, clothing and jewellery, then dumped him battered, bound and blindfolded on a roadside. Borland was also found guilty of beating and robbing Kawerninski while Gregory was found guilty of robbing him.

It is understood police had held fears that witnesses in the case would be interfered with. One witness told them he had been assaulted and threatened about giving evidence in court. 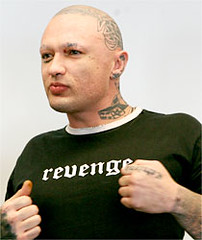 Borland, a heavily tattooed bonehead with a scalp tattoo and the word “Nazi” tattooed above one eyelid, shouted “F…… pigs” as he was led away from court on his first appearance for depositions at the Lower Hutt District Court in September last year.

During the depositions hearing, friends of the accused sat in the public gallery making hand signals to the three in the dock. One female was warned about making threatening looks at a prosecution witness who was giving evidence.

Detective Inspector Shane Cotter said police were treating the intimidation of the juror as “a very serious offence”. Any attempt to influence the justice process was an attack on the justice system itself, he said. Police have refused to make further comment while the investigation is under way, and have also declined to comment on whether jurors were now under police protection.

A man who attended the two-week trial, and who did not wish to be named, said the 12 jurors were clearly visible as they came and left the High Court in Wellington each day. Associates of the accused were constantly “up and down the road”, and it would not have been hard to follow a juror home. “I think they could do a bit more for jurors, maybe have a pick-up for them and take them straight into the basement. It’s not good,” he said.

Auckland University faculty of law associate professor Scott Optican said that in the United States, measures were often taken to make sure jurors were safe. These included officials to protect them, picking jurors up from a safe point, keeping their identity secret and having them stay at a hotel during the trial. But he said such measures should only be considered in New Zealand where there was clear evidence that intimidation of jurors could occur.

Writing on an anti-racism website, Kawerninski has said he was not afraid of the men who beat and robbed him. “In Canada we deal with gangs every day … there are murders every night here on the east end of Vancouver … stabbings every day … and I am not going to stay inside scared of these guys,” Kawerninski wrote.

The police investigating a threatening note sent to a juror in a High Court trial in Wellington have confirmed a second person has reported an attempt at intimidation. Three men were found guilty on Friday of kidnapping a Canadian tourist, by a jury reduced to 11 members. A 12th juror had been discharged after telling court officials he had received a note at his house, which read ‘not guilty’ and had a swastika drawn on it. Lower Hutt police have confirmed another person involved in the trial has reported being intimidated during the hearing. They are investigating both incidents, and say it is important to get to the bottom of the issue to make sure all jury members feel safe to do their jobs.

Police have arrested a 40-year-old man after a juror in a Wellington trial was threatened last week. Detective Sergeant Brent Murray from the Lower Hutt police said the man had been charged with attempting to pervert the course of justice and was due to appear in Lower Hutt District Court. The alleged incident happened during a trial in the High Court when a note saying “not guilty” and marked with a swastika was found in a juror’s home letterbox. The trial involved three boneheads who were on Friday night found guilty of charges ranging from kidnapping to causing grievous bodily harm to Canadian tourist Jeremie Kawerninski. The juror in the Wellington case was discharged before the trial ended. Mr Murray said police had not ruled out the possibility that other people may have been involved…