Brazil: Occupations of the Poor & Homeless (Melbourne, too)

Isabel, a 15-year old, facilitated the asamblea that I attended, and was not hesitant to tell 60-year old revolutionaries to shut the hell up and let other people speak…

Slavery wasn’t abolished in Brazil until 1888, and when it ended, newly-freed slaves were cast to the streets to fend for themselves with no resources or property. Thus began the precarious situation of Afro-Brasileros post-slavery. Current manifestations of this infamous legacy are the favelas – prevalent in all major Brazilian cities, including Rio de Janeiro. Unlike Sao Paolo, where favelas are concentrated on the periphery of the city, Rio has favelas spread out all over, often right next to the richest of neighborhoods. The favelas receive almost no government assistance and any resources they have are “appropriated” from outside the favela. Streets are unpaved, sewer infrastructure doesn’t exist and electricity and water are often stolen from more affluent adjacent barrios…

Yet again the money moguls, capitalist wankers and government-sponsored criminals have won. The Baymour Court flats were evicted by the filth — subservient scum to the rich — while a hundred or so people looked on and the media filmed the whole show to screen between sports segments.

The whole process started a few years ago when high-flying parasites such as Bond and Brady moved into St Kilda declaring it to be their town to tear apart at will. Pubs were sold and yuppified, greasy food bars became upmarket hang-outs for the rich and the streets were cleaned up. The first stage completed, the character of the town had the seed of yuppie sickness buried deep inside its grungy veins. Next the residents had to go, and Charnwood tenants and squatters moved out: the Esplanade, with its Gold Coast-type views, is being invaded. The Venue is closed, Baymour Court flats evicted and standing empty, and the foreshore is secure in yuppie hands. Now the interior waits to be conquered, and the evil seed will have sprouted… 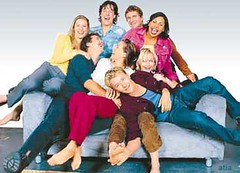 STUDIOS FROM THE IMAGINARY, AND OTHERS JUST DOWN THE ROAD

The Espy Artist Studios, at the rear of the Espy Hotel, is almost archetypal of the romantically shabby studio complex, its Spanish Mission-style façade looking like a stage flat straight from Carmen. While common internal areas are similarly crumbly, the rooms themselves prized — it comes as no surprise to find that space in the complex is highly sought-after, and usually passed between artist friends. The derelict two-story block of flats has been studios since 1997 but won’t be around for much longer. In the overgrown internal courtyard a five-story scaffolding tower has been erected by property-developer owner Becton. Prospective buyers of the apartment high-rise that is to replace the 1930s ‘Baymour Court’ block are led from the display apartment on the Esplanade to climb above the studios to inspect the view.

One wonders if those who make the climb appreciate the irony that the website pitch for the Esplanade apartments celebrates the “gently decaying buildings” of St Kilda. As they look over a studio’s north-facing window and out to the bay, they also overlook the very qualities that attract developers and buyers to somewhere like St Kilda. Capitalising on a “gritty past” we are told that the replacement for the gloriously grungy building will be “contemporary yet timeless, strong but not intimidating, luxurious but not ostentatious.” Indeed!

See also : ‘Home Sweet Squat’ | Jerry the Peddler makes pitch for permit, but Parks isn’t buying, Lincoln Anderson, The Villager, Vol.77, No.8, July 25–31, 2007: “In the mid-1980s, [Jerry] became a squatter and has lived in several East Village squats over the years, moving when one burned down or when police evicted the squatters from another, Dos Blocos. Police removed Wade from Dos Blocos in shackles. “At one point, we had 30 buildings, our own bookstore, a blacksmith shop, our own newspaper and a radio station,” he said of the squatter movement.” | Squats to disappear “naturally”, Tribune de Genève, July 25, 2007: “A Geneva cabinet minister defends the forced eviction by police of squatters from the Rhino buildings and says the demand for housing will lead to the disappearance of the movement.” (Teargas used after squatters evicted, 24 Heures, July 24, 2007) | Maisie Ramsay, Dumpster diving: ‘Freegans’ and others survive on society’s refuse, The Capital Times, July 23, 2007 (with Bonus! and actually interesting reader commentary)

I live in Melbourne, Australia. I like anarchy. I don't like nazis. I enjoy eating pizza and drinking beer. I barrack for the greatest football team on Earth: Collingwood Magpies. The 2020 premiership's a cakewalk for the good old Collingwood.
View all posts by @ndy →
This entry was posted in Anarchism. Bookmark the permalink.