CHICAGO (Reuters) – When Oscar the Cat visits residents of the Steere House Nursing and Rehabilitation Center in Providence, Rhode Island, the staff jumps into action — Oscar can sense within hours when someone is about to die.

In his two years living in Steere’s end-stage dementia unit, Oscar has been at the bedside of more than 25 residents shortly before they died, according to Dr. David Dosa of Brown University in Providence.

He wrote about Oscar in the New England Journal of Medicine.

“It’s not that the cat is consistently there first,” Dr. Joan Teno, a professor of community health at Brown University, who sees patients in the unit. “But the cat always does manage to make an appearance, and it always seems to be in the last two hours.”

Raised at the nursing home since he was a kitten, Oscar often checks in on residents, but when he curls up for a visit, physicians and nursing home staff know it’s time to call the family.

“I don’t think this is a psychic cat,” said Teno. “I think there’s probably a biochemical explanation,” she said in a telephone interview.

While pets are often used to bring comfort to the elderly in nursing home settings, Oscar’s talent is special, though not unexpected.

“That is such a cat thing to do,” said Thomas Graves, a feline expert and chief of small animal medicine at the University of Illinois College of Veterinary Medicine… 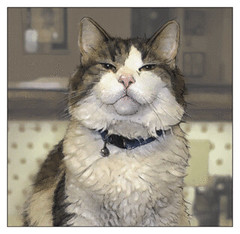 Oscar the Cat awakens from his nap, opening a single eye to survey his kingdom. From atop the desk in the doctor’s charting area, the cat peers down the two wings of the nursing home’s advanced dementia unit. All quiet on the western and eastern fronts. Slowly, he rises and extravagantly stretches his 2-year-old frame, first backward and then forward. He sits up and considers his next move…

Speaking of cats and death, Diodorus Siculus (of Sicily) (c.90–30BC), the Greek historian and author of the Library of World History, mentions witnessing a group of Egyptians lynching a Roman who had (accidentally) killed a (holy) cat. “Whoever kills a cat in Egypt is condemned to death, whether he committed this crime deliberately or not. The people gather and kill him. An unfortunate Roman, who accidentally killed a cat, could not be saved, either by King Ptolemy of Egypt or by the fear which Rome inspired.” Further, according to Ancient Egypt Online:

It was apparently illegal to export cats to neighbouring countries. This led to a thriving trade in smuggled cats! Court records confirm that armies were occasionally dispatched to rescue the kidnapped felines and bring them home to Egypt.

Herodotus claimed that on discovery of a house fire, the men from the house would line up outside the building to protect the cats from danger. He suggested that the cats would “leap into the fire” unless protected by the men, which seems rather unlikely unless their kittens were still inside the home. This story may well be made up or exaggerated, but again highlights the high status of the cat in Egyptian society.

Herodotus also recorded that the Persians used the Egyptian’ love of cats against them. Apparently, the [evil!] Persians captured a large number of cats and let them loose on the battlefield outside Pelusium. When the Egyptians saw the terrified cats running around the battlefield, they surrendered rather than risk harm to their beloved friends.

I live in Melbourne, Australia. I like anarchy. I don't like nazis. I enjoy eating pizza and drinking beer. I barrack for the greatest football team on Earth: Collingwood Magpies. The 2023 premiership's a cakewalk for the good old Collingwood.
View all posts by @ndy →
This entry was posted in !nataS, Cats. Bookmark the permalink.