Update (July 31) : YouTube, presumably bowing to pressure from the Church, has removed the offending video. The Good News (so to speak) is that it’s still available via Live Leak; you can even download the video if you want…

Update : After initially defending Reverend Geoffrey Baron’s behaviour, it now appears that, perhaps after some further prayer and reflection (and perhaps even some further consultation with the Church’s PR department), local Church authorities now believe it wiser to apologise for the Reverend’s racially abusive, sexually explicit, and profanity-laden diatribe as captured on video last year. Or so says Sky News (Church apologises). Baron, whose behaviour has been characterised by me as being the real life embodiment and Antipodean Catholic equivalent of Viz magazine character Paul Whicker The Tall Vicar, has also apparently prompted a children’s rights group to recommend anger management classes… well, according to the Herald Sun / AAP anyway (Priest vs skateboarders shocker).

Mark Russell in The Age reports that Red-faced church sorry for blue dean, and a slightly more formal apology — carefully describing Baron’s references to sore arseholes, sperm, and boys fucking, by way of stating that the Right Reverend “used obscene language and suggested in vulgar terms that the youths were homosexual” — is also provided by a further article in the Herald Sun (Apology for priest’s tirade).

Every now and then you did a cartoon you were aware hit the button and you immediately got a good reaction from it. Paul Whicker the Tall Vicar was the first one, in 1981, and after that Johnny Fartpants, and when the Fat Slags were launched, they had the same effect, a considerable initial impact and then they fade away.

“Likewise, Sodom, Gomorrah, and the surrounding towns, which, in the same manner as they, indulged in sexual promiscuity and practiced unnatural vice, serve as an example by undergoing a punishment of eternal fire.” (Epistle of Jude 1:17) or “How’s your arsehole so sore by being fucked by all these cunts?”

In a not entirely unexpected development, local Church authorities, in the person of the Vicar-General of Melbourne, the Reverend Les Tomlinson, have defended the actions of a local priest, who last July provided local youth with an impromptu sermon on the need to respect Church property. A video on YouTube shows the Dean of Melbourne Cathedral, the Reverend Geoffrey Baron, quoting from one of the lesser-known Epistles of St Paul, and instructing a number of teenage boys skateboarding on property outside of the Cathedral to be Good Christians and to go forth and multiply, “by the sperm of all these boys that fuck you”.

A rough transcript is available for your reading pleasure here.

Judging by reports (or one at least), teenagers skateboarding on Church property — in this case, that belonging to St. Patricks’ Cathedral in Melbourne — are a persistent problem for Church authorities. However, despite this, the Church does not appear to have established an especially sensitive means of encouraging teenagers to skate elsewhere, instead allowing an elderly Reverend (supplemented by the stern instructions of another, unknown female Church official), to engage in racist and sexually explicit verbal abuse of the young offenders in question.

According to one parishioner, the priest in question, Dean Baron, “was ordained in 1968 at Saint Kevin’s Church, Ormond and served in a number of parishes as an assistant priest before being appointed parish priest of Saint Joseph’s Parish, Northcote in January, 1984. In July, 1997 he was appointed parish priest of Saint James’ Parish, Gardenvale. Dean Baron has many talents to bring to the role of Dean of the Cathedral, not least of which are his considerable musical background and ability, his keen interest in liturgy, his warm, friendly and welcoming personality and his generous and committed pastoral care of those entrusted to him.”

And er, the ability to swear like a drunken sailor.

The ABC’s account of the contents of the YouTube video is particularly interesting, because although it makes reference to Baron’s racist taunts, it signally fails to register their explicit sexual content. What’s more odd is the fact that, while neither it nor any other ‘news’ service provides a link to the video in question, viewing it would quickly reveal that there’s more to the story. That said, why the contents of the video should only come to the attention of the corporate/state media now, over twelve months after the incident itself (and its being uploaded to YouTube), is a question left unanswered and, in fact, unasked.

MARK COLVIN: The Catholic Church is defending the behaviour of one of its leaders, the Dean of Melbourne Cathedral, after a video showing him verbally abusing a group of teenagers surfaced on the internet.

The Reverend Geoffrey Baron is seen being harassed and abused by a group of skateboarders, but rather than turning the other cheek, he lets fly with obscene and racist epithets.

A spokesman for the Catholic Church says problems with trespassing skateboarders are long-standing and Monsignor Baron was provoked.

SAMANTHA DONOVAN: The footage, posted on the video sharing website YouTube was apparently shot a year ago and runs nearly three and a half minutes.

It appears that a group of skateboarders has been ignoring Reverend Geoffrey Baron’s demands that they leave the steps and paved area outside Melbourne’s St Patrick’s Cathedral.

Several of them continue to skateboard around him and taunt him asking him if he wants them to leave.

SAMANTHA DONOVAN: As the skateboarders make obscene gestures, taunt and throw things at Monsignor Baron he appears to respond with comments about one of the teenager’s race.

GEOFFREY BARON: Get back to where you come from you spool [sic]. You don’t belong in Australia.
SKATEBOARDER: You are racist you f***. Stop being a racist f***en freak. Don’t touch me you freak!
GEOFFREY BARON: Get off the property. You foreigner there! Look at his sleepy eyes, his black hair, sleepy eyes. Go back to where you belong.
SKATEBOARDER: You f***ing bald prick.

SAMANTHA DONOVAN: This afternoon, the Vicar-General of Melbourne, the Reverend Les Tomlinson said the video was disturbing and the Church wasn’t proud of Monsignor Baron’s behaviour but he had been provoked.

LES TOMLINSON: Could you imagine yourself being subjected to the abuse and the pushing that he was subjected to and be confident that you yourself would not react in a way that perhaps you wouldn’t if you weren’t provoked?

And if any human being is under siege like that, they may well react in a way they wouldn’t do in another circumstance.

SAMANTHA DONOVAN: Monsignor Tomlinson said groups of skateboarders gathering around the Church have been a long-standing problem.

LES TOMLINSON: I know, the Dean has spoken to me several times and [is?] feeling in fear of his own safety with the confrontations he’s experienced. And I think that the YouTube demonstrates not only the confrontation that occurred, but how it was provoked by these skateboarders.

SAMANTHA DONOVAN: Monsignor Baron is away at the moment.

Monsignor Tomlinson says he will speak with him on his return but isn’t sure if he will be reprimanded.

Hmmm. The Church asks for patience and understanding following one of its members being exposed, publicly, as abusive. Apparently, the boys provoked the priest. Or, perhaps he wasn’t in full control of his faculties.

And now he’s gone away.

Where have I heard these lines before? Oh yeah:

There are many reasons why Broken Rites has encountered so many cases of Catholic Church sex-abuse.

Furthermore, until recently, the Catholic Church has skillfully managed to cover up cases of sexual abuse within its ranks. Too often, Catholic child-victims felt that they were prohibited from reporting the abuse to anyone, even to their parents. Too often, Catholic parents were reluctant to go to the police.

Commonly, Catholic victims maintained a life-long silence about their abuse. If they did report the abuse, often they merely told a church official – perhaps at a bishop’s office or the headquarters of a religious order. But this enabled the church officials to “tip off” their colleague, the offender; and then perhaps he would be transferred to a different parish or a different school or, in some cases, to another diocese, to abuse new victims; or he might be awarded an overseas “study” trip. The offender’s former parishioners (or students) would not be told why Father (or Brother) was leaving his old parish, and the new parish (or school) would not be warned why Father or Brother was arriving. Thus, countless children and vulnerable adults were put at risk.

In Australia, this Catholic cover-up began to break down after Broken Rites began operating in 1993. Broken Rites established, and publicised, a telephone hotline for survivors, and we began receiving calls from thousands of people (mostly Catholics), alerting us to cases of church sex-abuse that had had hitherto been covered up. The first cases we took up resulted in the jailing of several Catholic priests and religious brothers throughout 1994, 1995 and 1996. These convictions created a big impact in the Australian news media. This publicity prompted more survivors, especially those with a Catholic background, to phone us for help. This helps to explain why Broken Rites has been involved in so many Catholic cases. Incidentally, the members of the current Broken Rites executive committee all happen to have had a Catholic childhood…

Tomlinson himself is quoted in the case of one priest, Reverend Barry Robinson:

A year after the Archdiocese of Boston adopted a new policy on handling allegations of clergy sexual abuse in the 1990s, an Australian priest who had admitted having sex with a teenager abruptly left the archdiocese and the country, short-circuiting a potential investigation by police and child welfare authorities, according to documents filed yesterday in Suffolk Superior Court.

Documents from the archdiocese’s own files show that the Rev. Barry Robinson returned to Australia in April 1994 without being questioned by civil authorities even though Robinson had acknowledged to his therapist in March that he had had sexual relations with a teenage boy on three occasions in the rectory of Blessed Sacrament Church in Jamaica Plain…

In addition to admitting to a therapist and church officials to having been sexually involved with the teenager, Robinson also acknowledged that he had engaged in sexual “misconduct” when assigned as a priest in Chile from 1979 to 1985, a church official in Australia said in a statement…

Monsignor Les Tomlinson, vicar general for the Melbourne Archdiocese, said in response to written questions yesterday that Robinson had not been contacted by law enforcement authorities once he arrived back in Australia…

“So you’re not a terrorist? Pffft. Who cares. You can piss off anyway.” or Kevin Andrew does his bit in The War on Terror™

“Mohamed Haneef is at Brisbane International Airport ready to fly back home to India tonight, after the Immigration Department returned his passport. Dr Haneef was freed yesterday after almost four weeks in custody on a terrorism-related charge that was dropped yesterday. The doctor, who was working at the Gold Coast Hospital before his arrest, says he is homesick and anxious to be reunited with his family. Dr Haneef is scheduled to fly out just after midnight via Bangkok, accompanied by a relative and his lawyer, Peter Russo…” ~ ABC News, July 28 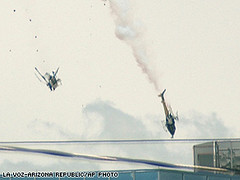 (CNN) — A police chase through the streets of downtown Phoenix turned into a midair tragedy Friday afternoon when two television news helicopters covering the action collided and crashed to the ground in smoke and flame, killing all four people on board. KTVK-TV said photojournalist Jim Cox and pilot Scott Bowerback were killed. KNXV-TV identified its crew as photographer Rick Krolak and pilot Craig Smith…