Forgive us our trespasses, as we forgive those [email protected]#$ing c%^&s who trespass against us 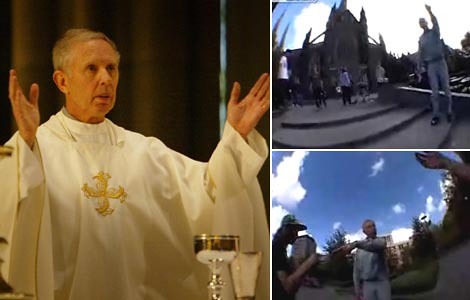 Brendan Shanahan, on the other hand, wants to ‘Thank heaven for mad priests’ (NEWS.com.au, August 3).

In the meantime, the man in the hot seat, the Very Reverend Monsignor Geoff Baron, has left Melbourne for Sydney, where Carly Crawford caught up with him. In her article, ‘Melbourne’s swearing priest speaks out’ (August 4), Geoff claims that he and other staff at St Patrick’s have been the subjects of a four-year long campaign of harassment by a mob of local skaters, of which the YouTube video captured only a much later — tho’ admittedly unfortunate — outburst. Speaking on behalf of the Melbourne archdiocese, Vicar-General Monsignor Les Tomlinson claims skaters have caused $32,000 damage to Church property (presumably over roughly the same period). In essence then, the Church argues that it’s important to place the padre’s sermon in context, and that context is a priest at the end of his tether.

The sympathies of most commentators seems to rely, ultimately, on their ability to identify with one or other of the parties captured on video: aged priest or teenaged skateboarder. This propensity, in turn, seems to depend on factors such as age, degree of religiosity, and the sense of being either ‘for’ or ‘against’ the earthly authority embodied in such figures as the potty-mouthed priest. Many of the more excitable of his supporters, such as those to be found on Stormfront, remind me of a couple of poems by the Bard of Salford, John Cooper Clarke.

And here they are.

sweet little fifteen on a summer hike
vandal maimed, vandal spite
vandals sent to up above
a punishment meted out with love

The Isle of Man

where are the weirdos, thugs, and louts
down in the dungeons dishing it out
their politics would recommend
a bunch of sticks and a young offender

1 Response to Forgive us our trespasses, as we forgive those [email protected]#$ing c%^&s who trespass against us