Just one more brief note on the subject of Peter Campbell.

1) Peter is indeed well into his forties: he’s 48.
2) The WPCA was responsible for distributing racist fliers in Toowoomba last year. The latest incident:

THE Catholic Social Justice Commission will report to police that more race-hate fliers have been dropped in city letter boxes.

The recent flier depicts two white youths in front of a map of Australia and the words “Youth, Nation, Destiny” and “Save The White Race!” and an Internet address.

Okay. No shit, only the facts. My life is communication. I am a Man of many contacts. As well as dealing with many on the high side of life I also have friends in (very) low places, so to speak.
Well, here’s the facts. On Sunday there WILL be many truly hardcore Whites heading out to Cronulla Beach in spite of (or perhaps because of) the warnings against “vigilante” action. Some of these Whites will include some senior membership of the Black Uhlans M.C. These people, including my contacts, are NOT chickenshit sightseers or innocent bystanders. Believe me, all bullshit aside, if these folk arrive at the beach and there is even ONE Arab face in view, there WILL be bloodshed!

Despite Peter’s continual big-noting, he claims:

I KNOW what these people are capable of and I do NOT want to be even on the periphery of any possible action. I am now a family Man and want to grow old with a cleansing ale in my hand.

I got to thinking a bit more about the battle for Cronulla and perhaps there IS some merit to this particular manifestation of “community policing”.

It CAN be done for one simple reason. It has been done BEFORE.

He then proceeds to tell an old war story about violent racial conflict between rival ethnic gangs in Campbelltown, and the eventual triumph of the ‘whites’. The lesson to be drawn from this experience according to Peter?

The conclusion and the lesson? When pressed, and with their backs to the wall a community WILL defend its own people and territory. It is a FACT that this “vigilante” action DID THE JOB!

Peter’s thoughts are also, predictably enough, on the subject of the difficulties neo-Nazis like him typically experience in jail:

They KNOW it is an unusually cruel punishment for Whites in general but an almost certain DEATH SENTENCE for White Nationalists!

Peter doesn’t appear to be too perturbed at this prospect however. Writing as “People Power! Aussie Style”, inre to ‘Cronulla’, he states:

Apart from a few slimy bleeding heart traitors (the usual suspects from the Left) whining on about being “ashamed to be Australian” the White Australian callers to Sydney’s talkback radio stations have so far been almost exclusively supportive of the Cronulla protest. 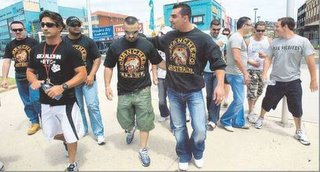 …and as ‘Anonymous’ he adds:

The only time I am ashamed to be Australian is when they call a gook five minutes off the boat Australian. Let this be a lesson to the bleeding heart red maggots, the majority of White Australians are disgusted with what multiculturalism has bought to the country and now people are doing something about it.

Finally, Peter claims that it was simple love of family that prevented him from joining in on what was in his opinion the beginning of the end for Australia as a multicultural society:

I have spent most of the day beside myself with feelings of guilt and frustration for not attending the Cronulla protest myself. I had family commitments and had to hang around home until mid afternoon when I started phoning my contacts who DID go. Unfortunately I could not get them to answer their phones and I did not want to go into the area without some friends. Also, the media reports were indicating that most major roads into the area were now being blocked.

I must say it was also shameful to see the coppers FINALLY getting out their extendable metal batons and whippin’ the fuck out of White AUSSIES!

Can someone explain why they did NOT do the same on the Sydney Town Hall steps a few years back as they were being spat on by Arabs and hit with flying chairs?

Maybe. But not as ‘funny’ as Peter.