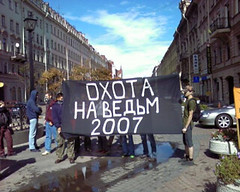 Two anarchists from Petersburg, Andrei Kalyonov and Denis Zelenyuk, as well as a Chechen from Novgorod, Hasan Didigov, are still being held in jail in Novgorod. The three are accused of attempting to blow up the “Nevsky Express” train in the Novgorod region on August 13, 2007. Under Russian law, those accused of terrorism may be detained for 30 days, but Russian anarchists and others are demanding their immediate release.

On August 26, the regular picket of the Anti-war Committee took place in the centre of Petersburg. Activists held banners with slogans reading “Freedom to Andrei Kalyonov and Denis Zelenyuk!” and “Witch-hunt 2007”, distributed leaflets about the case, and collected money to be used in their defence. Up to 50 people participated.

On August 28, anarchists, human rights and anti-war activists organised a picket in Moscow in solidarity with Petersburg anarchists. The picket was not permitted by the authorities, and six participants were detained and spent a night in the local police lockup. The next day anarchists tried to organise another picket, but Moscow police were successful in preventing them from doing so.

On August 29, after two weeks, Andrei Kalyonov ended his hunger strike because of his worsening health.

I live in Melbourne, Australia. I like anarchy. I don't like nazis. I enjoy eating pizza and drinking beer. I barrack for the greatest football team on Earth: Collingwood Magpies. The 2021 premiership's a cakewalk for the good old Collingwood.
View all posts by @ndy →
This entry was posted in Anarchism, State / Politics, War on Terror. Bookmark the permalink.