Bush : “Sorry for the inconvenience” 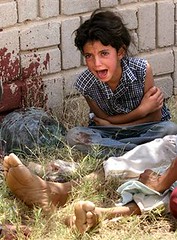 US President George W Bush has apologised for any inconvenience caused by his Presidency. A security clampdown all over the world has been dramatically increased since the US President ordered US armed forces to invade Iraq four years ago. President Bush says he is sorry to the world’s peoples but asked that they recognise the possible violent threat they constitute. “To the extent that I’ve caused this I apologise,” he said. “I don’t want to come to a country and [have people] say, ‘what a pain it is to have the American President‘. Unfortunately however, this is what the authorities thought was necessary to protect people and … you live in a free market, people feel like they want to protest, fine. They can, unfortunately. And, evidently, some people may want to try to be violent in their protests.” 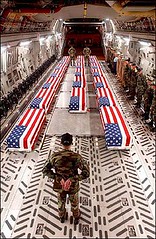 See also : Joseph Wakim, A tale of two unpopular fences, The Courier-Mail, September 6, 2007, comparing and contrasting the wall in Sydney with the wall in Palestine, which an Israeli court has recently ruled must be re-directed in Bilin, the “Palestinian village that has come to symbolize opposition to the enclosure”. Bilin has been the site of weekly protests involving Israelis and Palestinians, local villagers and people from the other side of the planet, for almost three years. For further discussion, see Eileen Fleming, The Power of Nonviolent Persistent People, Dissident Voice, September 5, 2007; and more generally, International Solidarity Movement on Bilin | Anarchists Against The Wall.

5 Responses to Bush : “Sorry for the inconvenience”