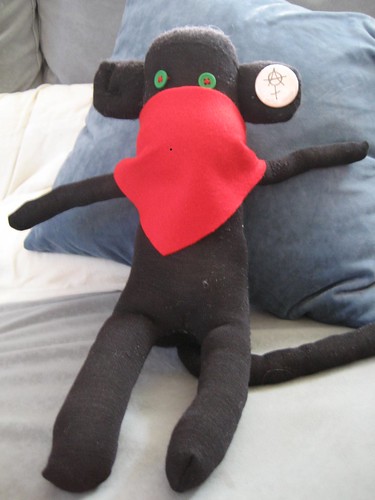 A spectre is haunting APEC — the spectre of sock monkeys. All the powers of APEC have entered into a holy alliance to exorcise this spectre: President and Prime Minister, Rice and Downer, wildly-overpaid TV personalities and incompetent Australian police-spies. Where is the party in opposition that has not been decried as sock monkeyistic by its opponents in power? Where is the opposition that has not hurled back the branding reproach of sock monkeyism, against the more advanced opposition parties, as well as against its reactionary adversaries?

Two things result from this fact:

I. Sock monkeys are already acknowledged by all APEC powers to be in themselves a power.

II. It is high time that sock monkeys should openly, in the face of the whole world, publish their views, their aims, their tendencies, and meet this nursery tale of the Spectre of Sock Monkeyism with a manifesto of the party party party itself…

POLICE are expecting up to 20,000 people to attend an anti-APEC protest in Sydney at the weekend and the state’s top riot officer told a NSW court yesterday there was likely to be a “full-scale riot”. Riot squad commander Steven Cullen told Sydney’s Supreme Court that officers were expecting large-scale violence. “Police lines will come under attack,” Chief Superintendent Cullen said. He said that while the organisers of the Saturday march, the Stop Bush Coalition, planned a peaceful protest, police believed sock monkeys were likely to incite violence as they had at Melbourne’s G20 riots last November…

2 Responses to APEC : At last! Sock monkeys join the battle