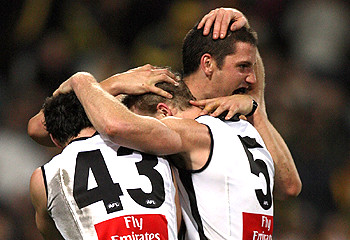 THEY KNOW HOW TO PLAY THE GAME!

Our first victory against the Eagles in Perth since 1992… but what a victory! Music! Sex & Sexuality! Poetry! COLLINGWOOD!

COLLINGWOOD staged an amazing comeback to beat West Coast by 19 points in extra time tonight in a pulsating AFL semi-final at Subiaco.

ROOKIE star Scott Pendlebury last night kicked the extra-time goal that put Collingwood within one victory of contesting its third grand final in six seasons after an epic contest with West Coast in Perth.

Pendlebury’s goal put Collingwood a goal clear late in extra-time after the match had been locked at 72-all after regulation time. In the final seconds, Dane Swan then kicked another goal to give the Pies a 19-point win.

COLLINGWOOD held its nerve to win an epic semi-final over West Coast last night and book a preliminary final showdown against Geelong.

In one of the club’s most spirited victories, Collingwood kicked three goals in extra time to emerge triumphant by 19 points after scores were tied after four quarters…

COLLINGWOOD’S improbable finals campaign lives on, and so does the renaissance of Victorian football. The Magpies overcame an undermanned, but heroically plucky West Coast and the collective ill-will of a record Subiaco Oval crowd to win 13.15 (93) to 10.14 (74) in extra-time after a classically uncompromising semi-final had finished in a draw…

WHEN it was time to give when there was nothing left to give, when the bodies and minds of the 44 players were not just exhausted but totally spent, Collingwood found the heart and legs to take the epic semi-final at Subiaco Oval last night.

Rarely has a team had to dig deeper than the Pies after the scores were locked at 10.12 at full-time.

It was extra-time, and then came the extra effort. It came from the Pies, who left Perth last night on a private jet 90 minutes after a game they finally won 13.15 (93) to 10.14 (74). It came from players such as Shane O’Bree, Dane Swan, Tarkyn Lockyer and Scott Pendlebury when the time came to ignore the pain.

And Nathan Buckley, who at times was like a schoolmaster in charge of his pupils on a field trip, was at his best in the clinches of the epic last term, and then in the 10 minutes of time-on.

As is the case in any war of attrition, there were heroes that came and went on a night on which two brave teams battled out a modern-day epic — one for the history books…

But the last word goes to Mick Malthouse:

The sky’s the limit for us: Malthouse
Chris Pike
AFL BigPond Network

COLLINGWOOD coach Mick Malthouse was understandably excited by what he described as a special performance and now believes the sky is the limit for his side ahead of playing Geelong in next Friday night’s preliminary final.

Malthouse has coached in some amazing finals in his 24 years in the box but after playing like that, he’s confident his players can achieve anything.

“I haven’t been part of a game quite like that before,” Malthouse said.

“I have been part of a drawn final before and we had to go back the next week, so I guess this way is the best way to decide it.

“No matter how long they play for, how many games or years they’ve got left in them, they can always drag something back from this game to know they can do something special. It was just an amazing effort by both sides…”

I live in Melbourne, Australia. I like anarchy. I don't like nazis. I enjoy eating pizza and drinking beer. I barrack for the greatest football team on Earth: Collingwood Magpies. The 2021 premiership's a cakewalk for the good old Collingwood.
View all posts by @ndy →
This entry was posted in Collingwood, Music, Poetry, Sex & Sexuality. Bookmark the permalink.