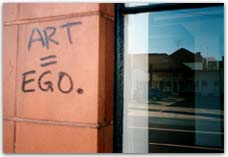 It seems that Azlan McLennan just can’t stay out of trouble. A couple of years ago (September, 2003) he managed to bring the conduct of students at Melbourne’s VCA into question (although not because they’d hatched a cunning plan to hang the last arts bureaucrat by the guts of the last gallery owner, unfortunately). Instead: “Student conduct at the Victorian College of the Arts is again being questioned after an unsuspecting security guard was hired and then humiliated as part of a performance piece last week.” ‘Again’ refers to an (other) art project of a few months prior: “a student filmed himself apparently killing a chicken”.

I am a working for Securicor,
Take the money and come back for more.
I want to do it cause I know I should,
For the customer and the common good. 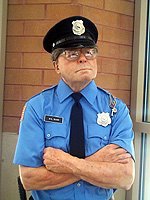 As The Age describes it, Azlan:

hired a security guard for an exhibition at the VCA student gallery. The guard, from the international security firm Group 4/Securicor! – which runs various detention centres – was not aware he was being used as an “installation” in the project, which was designed to make a statement about Australia’s policy on asylum seekers. [The private in a private army] was told to let people into the exhibition only if they had an invitation. But the gallery is usually open to the public, and conflict soon mounted between the security guard and students who were kept out. Only a few students had been given invitations, so some people who were unaware of the project became aggressive, and at one point, a scuffle began…

McLennan defended the art work, saying it aimed to show people what it felt like to be denied entry into a place they wanted to enter. “This kind of work is always going to polarise the community, but I’m happy at the end of the day if it sparks debate,” he said. But the incident has been controversial at the college, with some, including staff members, questioning whether it went too far. “I think there’s a widespread climate at the VCA of unethical conduct. It just doesn’t seem to be something that’s on the agenda or something that people think about,” said one inside source.

Azlan has also gotten into trouble with Melbourne City Council authorities and various right-wing pundits in the corporate media over a work — Fifty Six — critical of Israel (and produced with the aid of an $8,000 MCC grant). In May 2004 the work was painted over and council funding to the art group responsible for displaying it was revoked. In fact, last September (2005), “City of Melbourne officials banned him from exhibiting [Canberra’s 18] in its Campbell Arcade under Flinders Street on the subject of 18 terrorist organisations that had at one time been supported by governments in the Coalition of the Willing. So he showed it at Monash University the next month.” (A charge which the Council denies, incidentally. See: ‘Melbourne Council denies censoring local artist’.)

This month, Azlan’s at it again, this time with a poster campaign which I was again unable to see thanks to MiniCult (= “Yarra Trams, the Victorian Government and the City of Melbourne”: the posters in question having been removed three weeks ago). Inspired by the much loathed Metlink (= Melbourne’s privatised and naturally detiorating ‘public’ transport system) propaganda campaign against The Glorious Proletarian Struggle for a Means to get from A to B, Azlan has once more had the temerity to use his ‘art’ to question more than our sense of aesthetics. According to Mark Moor writing in the January 10, 2006 edition of the Herald Sun:

A CONTROVERSIAL artist was censored for the third time in 18 months yesterday after posters that seem to discourage Muslims from using public transport[!] were ripped down.

Victorian College of the Arts student Azlan McLennan allegedly made two posters imitating the Metlink Pay Your Way advertisements, but his version was deemed offensive and obscene by members of Government, transport operators and advertisers.

One poster, in a tram stop on the corner of Victoria Pde and Latrobe St, read “Attention passengers — in the interests of personal safety non-Anglos are advised not to use public transport.”

The second, on the corner of Collins and Spencer St, warned: “Muslim commuters may be subject to suspicion.”

Interestingly, the liberal broadsheet The Age characterised this as a case of an artist victimising Melbourne transport companies and an advertising company! ‘Fare game! Shelters feel the brush of protest’, The Age, Chris Evans, January 10, 2006:

MELBOURNE transport companies and an advertising company that maintains sponsored bus shelters in the city are the latest victims of an artist who two years ago upset the establishment with a work attacking Israel.

Outdoor advertising company Adshel, which provides and maintains the shelters, had donated the exhibition space to the Urban Art Collective.

Some critics argue that McLennan’s work is racist, a charge he denies in Holly Ife’s January 12, 2006, Herald Sun article ‘My art is not racist’:

The posters were deemed offensive and removed. But McLennan, who is in Indonesia teaching at a political art workshop, said his posters were designed to highlight the victimisation of non-Anglo minorities.

He said the poster telling non-Anglos to avoid public transport featured an image of Jean Charles de Menezes, the Brazilian man shot dead on a train by London police who mistook him for a suspect in an attempted bombing.

“This shoot-to-kill policy is a clear illustration of state terrorism and targeting of non-Anglo minorities,” the Victorian College of the Arts student said.

His second poster featured an image of Melbourne terrorism suspect Joseph “Jack” Terrence Thomas, who McLennan claims has been victimised for his religious and political beliefs.

He described the removal of his artwork as a “predictable exercise in damage control”.

McLennan’s website opens to an image of Osama bin Laden with the words “You need me” across it. The site contains links to Arabic news service al-Jazeera, anti-war websites and anti-Zionist organisations.

Stuffed if I can find it though! More serious, perhaps, is Rob Stary’s claim that Azlan’s work might possibly jeopardise Thomas’s right to a fair trial. As Fergus Shiel (‘Public art threatens fair trial: Thomas lawyer’, The Age, January 12, 2006) writes:

A VICTORIAN terror suspect’s right to a fair trial has been prejudiced by posters put up at tram stops as part of a public art program, his lawyer claims…

Rob Stary, lawyer for terror suspect Joseph Terrence Thomas, 32, said the posters were embarrassing and potentially a contempt of court.

Mr Stary said he was alarmed that the words “Attention passengers, Muslim commuters may be subject to suspicion” were superimposed over a photo of Thomas on one of the posters at the tram stops.

He said: “This has the capacity to abort his trial. It is completely ill-advised and probably amounts to a contempt of court. Who knows how many prospective jurors would have seen these posters?”

Thomas, from Werribee, is on bail and about to face trial, having pleaded not guilty to receiving money from al-Qaeda. He has not entered pleas to charges that he provided the terrorist group with resources or support to help it carry out a terrorist attack, and of having a false passport…

Finally, you can read some of Azlan’s reflections on ‘activist art’ here; critical commentary on “a grandstanding undergrad way out of his depth” may be found here; a more reflective piece on Fifty Six by Doris Reader, ‘Whiteout and the Madness of Truth’, may be found here; a lengthy and (eminently reasonable) Rationalist editorial on the same work may be found here; a ‘Submission by The National Association for the Visual Arts (NAVA)’ to the Senate Inquiry into the Anti-Terrorism (No. 2) Bill 2005 — which discusses some of the possible effects of this legislation on artists’ work and provides a potted history of recent censorship of artistic works — may be found here; an interview with Azlan (from some years ago) may be found here and (phew!) on the odd chance that you’d actually like to view some of Azlan’s work…

A Melbourne gallery is hosting a self-consciously seditious artwork this month, sure to contribute to the debate about freedom of artistic expression in Australia.

Proudly unAustralian, by artist Azlan McLennan, will be on show at Trocadero from the 18th January – 25 February.

“The burning of the Commonwealth flag exercises Prime Minister John Howard’s public, yet begrudging reluctance to outlaw Australian flag burning in 2002, with his admission: “…I guess it’s part of the sort of free speech code that we have in this country.”

The flag burning symbolises the locally and internationally deplored treatment by the Australian government of its indigenous peoples, asylum seekers, its industrial relations and education reforms, US collaboration in the attacks in Iraq and Afghanistan and the incitement against Muslim and Arab populations at home and abroad. This act is compounded by Howard’s denial that there is no underlying racist sentiment in Australia following the racial tensions in Sydney in December and more importantly, the government’s clear role in this division of class.”

Catch it while you still can!

I live in Melbourne, Australia. I like anarchy. I don't like nazis. I enjoy eating pizza and drinking beer. I barrack for the greatest football team on Earth: Collingwood Magpies. The 2021 premiership's a cakewalk for the good old Collingwood.
View all posts by @ndy →
This entry was posted in Art, State / Politics. Bookmark the permalink.