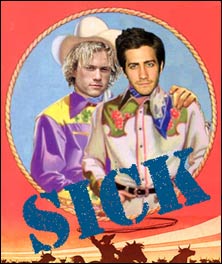 He goes he goes, he just goes… on… and on… and on… from “the very first article” on Ben’s blog to the latest entry, “the relentless assault” on intelligence, morals and good taste continues. First, Ben the literary critic; now Ben the cineaste. And guess what? It’s those damn (fat) Jews in Hollywood what are responsible! Again! As boofhead himself notes:

[That] Brokeback Mountain is received with acclaim by heavily-Jewish Hollywood — which has long sought to debase and destroy Western culture — should be reason enough to see such garbage as part of a concerted assault on White values and traditions.

Not too long ago we had a movie that perverted the traditional American cowboy heritage with the fictional tale of two gay, yes, gay cowboys. So much for Roy Rogers and the Lone Ranger… In an interview, Wyoming playwright Sandy Dixon objected to the film stating that she had “never encountered a gay cowboy” in a lifetime in the state, and doesn’t think what Hollywood is doing is right. To the film’s producers, she said: “Don’t try and take what we had, which was wonderful — the cowboys that settled the state and made it what it was — don’t ruin that image just to sell a book… There’s nothing better than plain old cowboys and the plain old history without embellishing it to suit everyone.”

No gay cowboys? Why son, that’s a load of horseshit, right up there with ‘no black cowboys’. Chuck Browning — a real rhinestone cowboy — sets the record, er straight, here. (Incidentally, the passages in bold are ones Ben plagiarised from a racist shockjock called “Frank Roman”.)

As for Tan Lines… Ben continues “in the same [thick, purplish] vein”. Thus according to boofhead:

…a new film is currently in production that concentrates on Australia’s world-famous White surfers[, the ones] who gave a serious kicking to the “multiracial dream” of the corrupt Aussie elite recently[. They] are being targeted [by] a new film portraying a [group] of homosexuals who surf [and live in] “a small town in New South Wales” much like the area around Cronulla, where thousands of Whites rose up against Muslim rape gangs who had been terrorizing the beaches.

Having declared his opinion on a film he hasn’t seen, Ben now proceeds to condemn a film that hasn’t even been released. The filmmaker’s crime, it seems, is to portray homosexuals — eeek! — as individuals capable of… surfing!

Now, Ben’s reasoning abilities may still be in short pants, but:

It wasn’t the Australian surfing community (lead by Mark Richards) who engaged in the violent assaults at Cronulla on December 11 last year. In fact, what happened was that a number of extremely cowardly members of a crowd of 5,000 assaulted several individuals of supposed “Middle Eastern appearance” (including Bangladeshi students, a Jewish boy and a Greek girl). While literally hundreds of arrests have been made in connection to that and subsequent events, the arrests of Danny Glen Shanahan, 20, an apprentice carpenter from Picton; Daniel Paul Kelly, 20, an apprentice plumber from Engadine; and Samuel Murray, 19, of Bardon Ridge, have received extensive media coverage. During their initial hearing, “Prosecutor Paul Upsall tendered media photographs of the riot showing Shanahan striking alleged victim Safi Merhi, who was “cowering” with his arms over his head in an effort to protect himself. Shanahan acknowledged that “this is a cowardly act and deserves punishment”, he said… [while] Kelly cried when he was refused bail.”

Little wonder then that surfers and beach-users around the country have since sought to put as much distance as possible between themselves and racist thuggery such as this. Not Ben though. I’m quite certain, however, that his exultation over violent racist outbursts such as this will — like Daniel Paul Kelly — end in tears.

I live in Melbourne, Australia. I like anarchy. I don't like nazis. I enjoy eating pizza and drinking beer. I barrack for the greatest football team on Earth: Collingwood Magpies. The 2023 premiership's a cakewalk for the good old Collingwood.
View all posts by @ndy →
This entry was posted in Anti-fascism, Film, History, Sex & Sexuality. Bookmark the permalink.