Oh man, this just gets better.

According to today’s Sunday Star Times, King George II (a/k/a George W Bush) was a possible target of the small group of 17 (or possibly 18) men and women so far arrested by police in Aotearoa/New Zealand as part of the state’s War on Terror™ / crackdown on dissent. Responding to widespread criticism by media and members of the general public, police have apparently leaked the claim that “US President George Bush was among those allegedly targeted in the threats recorded by police investigating the alleged Urewera terrorist training camps”. Exactly what this means — both in law and in reality — is a bit more difficult to ascertain.

The Times, for example, also reports that those taking part in the “terrorist training camps” — in what Bernard Lagan in Sydney describes as being “found deep within New Zealand’s most sacred mountain range” — were the subject of a 22-month long investigation by secret police, the ‘Special Investigations Group’. And at some point during this period, some of those who had their communcations recorded by the SIG made some kind of unspecified threat, not only with regards President Bush, but Prime Minister Helen Clark and National Party leader John Key (Threat on PM’s safety linked to raids, TVNZ, October 15, 2007: “It is understood there was a recent specific threat to Prime Minister Helen Clark’s safety linked to the training camp activities pounced on by police on Monday…”).

This, apparently, is what justified the use of 300 or so armed police to raid houses, establish road blocks, board a bus containing children (about which fact, according to the driver, the police lied), and to arrest Maori sovereignty / environmental / peace activists and anarchists. 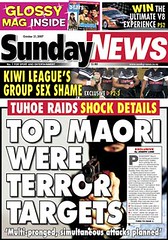 On a slightly more sombre note, Joseph Lose of the Sunday News (October 21, 2007) reports that:

Prominent Maori, including government department bosses, were among the targets of a simultaneous, multi-pronged terror attack that would have rocked the country, Sunday News has been told…

But it is the information provided by Sunday News‘ source within the operation which is most shocking.

“Each different splinter group was training under the one umbrella and they were going to carry out attacks on targets and infrastructure,” said our source.

“You would have had Tuhoe carrying out attacks on their selected targets, animal rights groups targeting their lot and the so-called `peace freaks’ carrying out their acts.

“They were pretty well advanced in what they were planning to do,” he said.

“They were not of the sophistication of the IRA or Bader [sic] Meinhoff (German Red Army [F(r)action]) but they were technologically more aware than the likes of the terrorists in Rhodesia Zebra and Zanu.”

Top stuff. Apparently, the loose assortment of activists arrested by police and currently facing various charges for violating the Firearms Act are technologically “more aware” than Robert Mugabe’s Zimbabwe African Nationalist Union (ZANU), while at the same time not as “sophisticated” as the IRA…

See also : The accidental terrorist – Tame Iti’s story, Sunday Star Times, October 21, 2007 (“Tame Iti’s arrest last week added another chapter to a colourful life. Tony Wall explores the many faces of the Tuhoe warrior and asks whether he is more ‘thespian than terrorist’.”) | Matt McCarten, Forget terrorists – it’s the secret police the public needs to fear, Herald on Sunday, October 21, 2007 (“The current young activists held without bail can stay in jail for up to two years without being convicted. The information that I have received is that the police have transcripts of all their phone calls and texts as well as all their personal emails. That can only mean that our citizens are being widely electronically monitored.”) | Noam Chomsky, The New War Against Terror, Counterpunch, October 24, 2001 (“We certainly want to reduce the level of terror, certainly not escalate it. There is one easy way to do that and therefore it is never discussed. Namely stop participating in it.”)

I live in Melbourne, Australia. I like anarchy. I don't like nazis. I enjoy eating pizza and drinking beer. I barrack for the greatest football team on Earth: Collingwood Magpies. The 2021 premiership's a cakewalk for the good old Collingwood.
View all posts by @ndy →
This entry was posted in !nataS, Anarchism, Media, State / Politics, War on Terror. Bookmark the permalink.