“The Serbs can say what they like.” Heil Thompson! 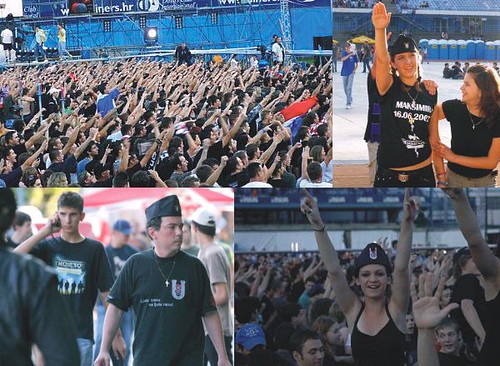 SERBIAN and Jewish community leaders are outraged that the social arm of the Melbourne Knights Soccer Club is hosting a concert by a Croatian rock star with a strong following among neo-Nazi sympathisers.

The revelation follows the club’s apology for staging a concert for neo-Nazi skinheads at its North Sunshine complex this month.

A concert by Marko Perkovic will be hosted by the Knights-affiliated Melbourne Croatia Social Club at the complex on December 28.

Perkovic, Croatia’s top rock star, uses the stage name Thompson, in honour of the American-issued submachinegun of the same name that he carried as a soldier in Croatia’s war of independence against Yugoslavia in the early 1990s.

“People in our community are thinking of the Knights as the Gestapo Club,” Mr Markovic said.

Mr Markovic said Perkovic had been granted visas for previous visits to Australia, while Serb singer Ceca Raznatovic has been denied a visa in 2005. “It’s double standards,” he said.

The Weekend Australian reported on Saturday that Melbourne Knights chairman Matt Tomas had censured his club’s social arm for providing a venue for the October 13 concert by skinhead [that is, bonehead] rock bands.

“I can understand why people are upset and just wish the social club would focus on its football identity,” he said.

“The Serbs can say what they like. It doesn’t bother us,” Mr Skunca said.

Immigration Minister Kevin Andrews said Perkovic had yet to submit a visa application, but it would be carefully considered.

27 Responses to “The Serbs can say what they like.” Heil Thompson!