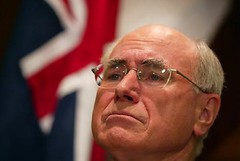 CANBERRA, Australia (AP) — Prime Minister John HoWARd battled Thursday to contain a last-minute scandal ahead of weekend elections, after campaigners for his Liberal Party were exposed distributing pamphlets accusing the opposition of sympathizing with terrorists…

SYDNEY, Australia, Nov. 22 — The center-right coalition of Prime Minister John HoWARd, who has been in power for 11 years and is one of the most stalwart supporters of President Bush in the Iraq war, faces a stiff challenge in Australia’s elections on Saturday, polls indicate…

The final days of the campaign have been dominated by a scandal in which the husband of a candidate for Parliament from Mr. HoWARd’s Liberal Party was photographed distributing leaflets that represented themselves to be from an Islamic group — a fictitious one, it turned out — thanking the opposition Labor Party for “support to forgive our Muslim brothers who have been unjustly sentenced to death for the Bali bombings,” in 2002, in which 88 Australians were killed. Mr. HoWARd said the party had not approved the leaflets, and the candidate, Karen Chijoff, knew nothing of her husband’s plans.

John HoWARd, Australia’s Prime Minister, was fighting for his political life yesterday as details emerged of an attempt by senior members of his Liberal Party to smear the opposition Labour Party and whip up anti-Muslim feeling in a key marginal seat…

Many allegedly conservative commentators were amused by suggestions of former Liberal prime minister Malcolm Fraser that Muslim Australians would be used as political wedges in the next election. Fraser’s remarks were dismissed as politically correct mumbo-jumbo. Yet for many of the 300,000-odd Australians who tick the “Muslim” box on their [census] forms, Fraser’s claims represented the prophetic words of an insider. He had, after all, worked with John HoWARd as his treasurer. And Fraser knows a thing or two about political strategy. Just ask Gough. HoWARd has frequently used ethnic and ethno-religious minorities as wedges. In the 2001 election, he and his ministers suggested that Iraqi and Afghan asylum-seekers were just a bunch of queue-jumpers or, worse still, potential terrorists…

Priest Peter Confeggi has condemned the bogus Islamic pamphlets distributed by Liberal Party volunteers in Lindsay, but has thanked them for bringing the Muslim and Catholic communities closer together.

Father Confeggi, the Parish Priest at Holy Family Church in Emerton, said talk at a meeting with the church’s reconciliation committee yesterday centred around the pamphlets.

“We just arrived speechless in the face of what the Liberal Party had done in Lindsay, utterly disgusted that Jackie Kelly could treat it as a joke, and unbelieving that she and the candidate didn’t know that their husbands were doing it,” Fr Confeggi said…

Kelly going ahead with Seven appearance
AAP
The Age
November 23, 2007

Embattled outgoing Liberal MP Jackie Kelly is still set to participate in the Seven Network’s election night coverage on Saturday night, despite her part in a bogus leaflet scandal… 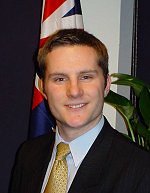 The stranglehold the far right has on the NSW branch of the Tories — tolerated for over a decade, with a nod and a wink, by HoWARd and the Federal branch of the Party — has finally started paying electoral dividends for “the Uglies”, as their dirty tactics are transposed from successful internal struggles for control over branches to the battle for seats, power, and the ability to impose their ideology through government channels. Of course, if they were smarter, the Uglies would simply allow the out-sourcing of such activity to continue to remain in the safe hands of the bizarros of the Exclusive Brethren, the radical Christian sect only too happy to Prepare Ye, the Way of the Lords. In the meantime, Alex Hawke, former Führer of the Young Liberals, and loyal lapdog to David Clarke, has branch-stacked his way to a seat in the Federal Parliament, having secured pre-selection to one of the safest Tory seats in the country: Mitchell. In July, HoWARd stated that “I… completely support the decision of the Liberal Party preselection committee in Mitchell, I totally support their (decision)”. Be not deceived; God is not mocked: for whatsoever a man soweth, that shall he also reap.

Karen Chijoff, the Liberal candidate, points out that interest rates were higher under Labor. “Like many local families, my husband and I work hard to raise our children and pay the mortgage. That’s why it is so important to us that the economy is well managed,” she said. “And why my husband — but not me, I knew absolutely nothing about it, and neither did anyone I know, it’s just not something a husband and wife would ever discuss, honestly, something like that I mean — felt compelled to issue shit sheets implying that the ALP supported Islamic fundamentalism. Not that I knew anything about it, of course.”