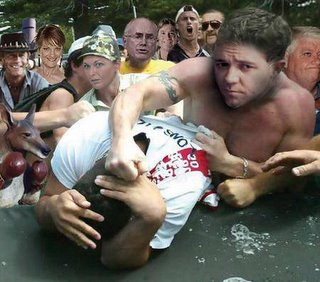 January 26 — Australia / Invasion / Survival Day — is only a couple of weeks away, and many will be celebrating / mourning. On the far right, Doctor James Saleam and his Australia First Party NSW (to be confused with the Australia First Party but not the Australian Protectionist Party) will, among other things, be attempting to capitalise upon anti-Muslim sentiment in Camden, NSW. To that end, Jimmy & The Boys (including, presumably, Ross ‘The Skull’ May) will be peddling Party literature to the people of Camden at a public rally.

According to one report “The president of the Camden McArthur Residents Group, Emil Sremchevich, said Australia First was entitled to hold a rally in Camden so long as it wasn’t racist. “Everybody has a right to express their political sentiments and messages as long as they do not vilify anybody,” Mr Sremchevich told AAP” (Anti-Islamic rally OK, residents say, AAP, Sydney Morning Herald, January 9, 2008).

In which case, Emil is effectively arguing that Australia First is not entitled to hold a rally in Camden, as its principal platform — and in fact its main selling point for its few score members — is precisely its racist call for a White Australia. Notably, the leader of Australia First (NSW), Doctor Jim, has a criminal conviction for arranging a shotgun assault upon the home of an anti-apartheid activist… suggesting Jim is convinced not only of the virtues of a White Australia, but a White South Africa too.

Still, these aren’t the only zany antics planned by crazy local fascists, as revealed in the following article in The Daily Telegraph:

WHITE supremacists are plotting to use Cronulla riot-style tactics to hijack Australia Day celebrations across Sydney – including a plan to push their racist views at the sacred Anzac Cenotaph at Hyde Park.

The attempt to co-opt the war memorial to create the impression “Hitler is coming to Sydney” has disgusted veterans, with the RSL calling it an appalling slur on the memory of our Diggers.

Other rallies will be held near the scene of the Cronulla riot and in Camden to protest the construction of an Islamic school.

The far-Right groups even promote an online handbook on how to combat police and avoid detection and infiltration when holding such meetings.

In an embarrassing display of incompetence, much of the material uncovered by The Daily Telegraph includes warnings about the need to keep such material secret from the media and this newspaper in particular.

The racist material, which condemns migrants for not being able to speak English, is riddled with spelling mistakes and poor grammar.

Much of the activity has been co-ordinated through the neo-Nazi website Stormfront, whose Australian arm is moderated by 18-year-old Newcastle resident Rhys McLean. 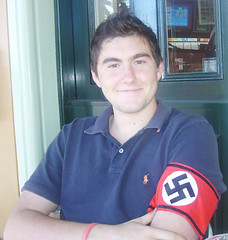 Above : Rhys McLean models a symbol of the Hindu goddess Kali (or possibly Nazi Party).

Mr McLean said he was aware of the plans but said it was a matter for the individual organisers, not the website.

The main organiser is a semi-literate man from southwest Sydney who posts under the name “Aussie Nationalist”.

After taking a poll of preferred locations, including Cronulla, the Central Coast and Bondi – because of its large Jewish population – the group appeared to settle on one of Sydney’s most sacred sites.

“The location is Hyde Park, preferably near the Cenotaph which is a place of eternal honour and the epitomy (sic) of the Australian Spirit,” Aussie Nationalist wrote.

“We’d be appalled by any attempt to use any memorial or the Anzac memorial in Hyde Park to support any prejudiced political group,” he said.

[Note that last year the Eastwood RSL played host to a conference organised by Saleam and Australia First, and for which a German neo-Nazi named Welf Herfurth played the role of MC. The RSL’s opposition to fascist and white supremacist elements is apparently dependent upon the circumstances…]

Another organiser promotes using tactics similar to the 2005 Cronulla riot, when en masse text messages were used to swamp the beach with violent thugs intent on bashing anyone of ethnic appearance.

“Organise flyer drops two weeks before the rally in Sydney and its surrounds, and start a Cronulla style SMS campaign five days before the rally,” the poster identified as “Awake at last” wrote.

“Hopefully by the time the rally starts the media will have everyone thinking Adolf Hitler is coming to Sydney.”

The threads also encourage users to consult a manual entitled How to Combat the Political Police.

An electronic newsletter distributed by the far-right Australia First Party employs the tactics, promising a rally near Cronulla and in Camden but refusing to disclose the exact location until the morning of January 26.

One meeting will be held in “a club in the Sutherland Shire” and be addressed by convicted race-hate criminal Jim Saleam.

Interestingly, Saleam has been a member of the Stormfront forum for a number of years, where he posts under the pseudonym ‘radnat’. (Rhys McLean, on the other hand, employed the pseudonym ‘Australian Euro’.) In addition to being united in joy by their desire for a White Australia, Saleam and McLean also utterly despise Jews, who are imagined as having embarked upon a genocidal campaign to destroy The White Man. This concept is given its fullest expression by the pseudonymous Yanqui ‘jack_boot’:

…First, we share a racialist vision for the general prosperity, security, and betterment of our people.

From that commitment flows our most important message: we name the Jew as the deadliest, if not the only, threat to our existence as a race. Forge this message in titanium.

Speaking of nuts, one of the other, er, ‘patriotic’ activities planned by Australia First is an address by Rex Gilroy. Rex’s talk is titled ‘Not The First, Not Alone’ and will apparently “place Aboriginal settlement in a broader and richer context” and reference “New evidence of human migrations”. This new context is indeed much ‘broader’ and ‘richer’ than less intrepid minds imagine. In other words, Rex is of the opinion that conventional history is bunk, and that Aboriginal Australia was preceded by another civilization: Uru.

What is it like to suddenly realise that you are the discoverer of an hitherto unknown ‘lost’ civilisation?

Words cannot describe my feelings at the moment I realised I had made such a discovery, and the enormous importance it had for Australian, and World history. I suppose the nearest description one could give of my feelings would be to compare them with the excitement of Heinrich Schliemann, when he discovered the ‘mythical’ lost city of Troy in 1873.

More recently, Rex has been chasing after the “presumed-extinct little scrub moa – anomalopteryx didiformis – in the Urewera Ranges” (Aussie pursuing moa in New Zealand, The Age, January 8, 2008). Perhaps in the course of his pursuit he’ll stumble upon another Lost Civilization? Or — rarer still — a credible neo-Nazi ideologue?

Join Date: Aug 2001
Location: a trailer park near you

AustralianEuro, [that is, Rhys McLean] an occasional moderator here on Stormfront Down Under, has thought the better of political involvement, and will not be back.
__________________

An awareness of such contradictions and incongruities can obviously introduce considerable doubt into the Court’s hand-me-down conception of the obviousness of “Holocaust,” and such obvious doubt is obviously capable of causing this ostensibly obvious “Manifest Obviousness” to appear as anything but obvious.

In point of fact, not only is Rhys McLean no longer SFDU moderator, it appears that his account has been closed and his posts expunged from the historical record. Worse still, according to the Jew-hating, Holocaust-denying, wellie-wearing Editor and Stormfront Chief of Staff:

Another fellow, who calls himself Dead Raven, sent us this PM:

Look you retards, I want this account and all my posts deleted. Not banned, now if you want my good friend Baron to get involved it will happen, I[‘]m sure the antis would be interested in some of the things that we would have to say. Stop being so stupid and just fricken [!] Delete this account and all of the posts as well. !!!

Could this be the beginnings of another round of recriminations on Stormfront Down Under?
Will ‘Dead Raven’ spill his guts to “the antis”?
Who’ll next accept the poisoned chalice that is Scumfront Down Under moderator?
Who are the two bands scheduled to pollute the Sutherland Shire with noise on January 26?
Stay tuned for more reich ‘n’ roll!

And here’s some final words of wisdom from Herr Doktor:

Media image for White nationalists? My advice to White nationalist candidates in 2008 and for other spokesmen would be when confronted by media: dress in neat cardigans, speak as calmly as it’s possible to speak when speaking to The Jew, don’t swear too much and don’t really answer their ‘questions’ (especially if they concern your criminal record). Just put over your politics. Do not repeat do not act like Dr. Strangelove. Past that point, don’t worry too much, because it really doesn’t matter. The media will say whatever it wants. It’s controlled by you-know-who.

I live in Melbourne, Australia. I like anarchy. I don't like nazis. I enjoy eating pizza and drinking beer. I barrack for the greatest football team on Earth: Collingwood Magpies. The 2021 premiership's a cakewalk for the good old Collingwood.
View all posts by @ndy →
This entry was posted in !nataS, Anti-fascism, History, State / Politics. Bookmark the permalink.