As you may already be aware, the Sydney Festival — ‘one of Australia’s largest annual cultural celebrations’ — is currently taking place. The Festival (January 6–30) is also the subject of a boycott, called on behalf of Artists Against Apartheid, because the Festival’s Board ‘made the decision to accept funding from the Embassy of Israel, making the embassy a Star Partner’. A large number of artists and performers have responded to the call. For its part the Board issued a motherhood statement.

One artiste that elected to ignore the boycott was Melbourne band Amyl & The Sniffers (‘After an occasionally shambolic hour there’s no encore but that proves relatively easy to accept – the job of lighting a fire under the Sydney Festival has been emphatically accomplished‘). Their decision surprised some, but it also prompted me to make a meme, so y’know: win some, lose some. 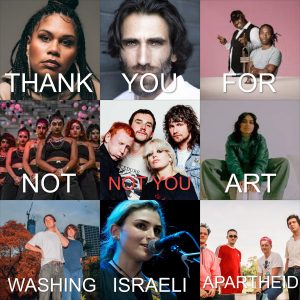 For what it’s worth, in 2022 I reckon The Sniffers are Too Big To Fail, and the moment will soon be forgotten, but I remain curious as to why they felt compelled to play; you can read Tropical Fuck Storm’s (slightly grumpy) announcement they’d be pulling the plug on their gig here. 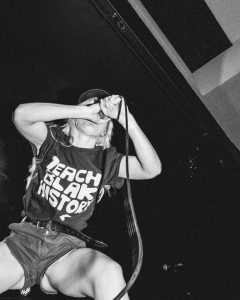 Black-Palestinian solidarity in the continent emerged during the late 1970s and began with the organised political actions of Ali Kazak and Gary Foley. Kazak, an activist, former Fatah member and, later, Palestinian Liberation Organization representative for the Oceania region, migrated to Australia in 1970. Foley is a Gumbaynggirr activist, historian, and co-founder of the Redfern Aboriginal Legal Services (1971) and the Aboriginal Tent Embassy (1972). Both Kazak and Foley saw the Palestinian and Aboriginal struggle for justice against settler-colonial occupation as united. Their shared militant, anti-imperialist, and internationalist actions against the occupiers and their beneficiaries held solidarity at the heart of their revolutionary decolonial imaginaries.

I live in Melbourne, Australia. I like anarchy. I don't like nazis. I enjoy eating pizza and drinking beer. I barrack for the greatest football team on Earth: Collingwood Magpies. The 2021 premiership's a cakewalk for the good old Collingwood.
View all posts by @ndy →
This entry was posted in Art, Broken Windows, History, Media, Music, Poetry, State / Politics, That's Capitalism! and tagged 19th Biennale of Sydney, Amyl & The Sniffers, Biennale of Sydney, Black-Palestinian Solidarity, Boycott the 19th Biennale of Sydney, Sydney Biennale, Sydney Festival, Tropical Fuck Storm. Bookmark the permalink.