[For Dion] Love versus hate // Another antifa stabbed in Moscow

(Please repost this anywhere you can! It’s extremely important – we still can save his life.)

On February 14th an antifascist activist was heavily wounded in Moscow by nazi scum. Now he is in hospital in a critical state and needs money for serious treatment.

On the day of the event a big mob of nazis indeed showed up at the place of the procession. But instead of gays and lesbians a crowd of about 50 antifascist skinheads and punks appeared at the square and shooed the nazis away. After this the parade commenced, covered by antifascist activists.

But the nazis managed to regroup and attacked one of the antifascist skinheads, who was cut off from the main force. The guy was beat up and stabbed heavily and ended up in the intensive care unit in hospital.

His life is still in extreme danger now. Doctors say that even at the best he could stay in hospital for several months.

You can send money through WebMoney:

After you send the money – please, send a notification about the transfer to this address: abc-msk[at]riseup[dot]net

(Please repost this anywhere you can! It’s extremely important – we still can save his life.)

Dion: December 12, 2007: “As I stated on the [Bombshell] forum Andy, you are a liar, a hypocrite and no better than the trash that you fight against.”

Idea to organise a Valentine’s day flash-mob for lesbians and gays was born out spontaneously in one lesbian internet community. Idea was to organise a positive action by showing that lesbians, gays, bisexuals and transgender people feel love just as anyone else, and thus Valentine’s Day is their celebration as well. Idea was that gay and lesbian pairs would walk hand in hand with small rainbow flags from Pushkin Square to Okhotny Ryad. Supporters with any sexual orientation were invited to join the action.

As plan was published openly in the internet, both police and Nazis were well aware of it. Already 2 hours before beginning of the action (announced 7 PM) there were Nazi scouts and three busloads of OMON riot police in the Pushkin Square, ready to beat the shit out from any deviation from the heteronormativity.

Nazis were gathering with little discipline, but heavily armed with chains and knives – before start of the action the went to verbally abuse liberal anti-war picket which takes place in Pushkin Square every Thursday with 10-15 participators.

Anarchists and anti-fascists decided to show support to lgbt people organising the action, and brought in a mob of 50, taking by surprise boneheads who were perhaps not more than 20 and who had expected lgbt to be an easy prey.

March was supposed to start from pedestrian underpass at Pushkin square 19:00, and already five minutes after police was harrassing anti-fascist supporters, so crowd had to move to the side of Tverskaya opposite from the statue. Five minutes more and coppers were there as well, so march had to be finally launched, probably without much of the lgbt people who were not right on time. Eventually there were no more than 10 lgbt activists walking with rainbow flags, remaining crowd of 50 people were anti-fascists and anarchists, some of which were there to support lgbt and others for a confrontation with Nazis. It is possible that some lgbt people were put down by jokes about “faggots” by least politically correct elements of the Antifa, or scared of the outlooks of Antifa which differed a little from that of Nazis, and they did not joined action in the first place.

During march, some antifascists were eager to go after the Nazis, but they were persuaded not to do so as by doing such they would leave those who joined the action to a vulnerable position. Nazis were so heavily outnumbered that they did not even considered attacking the action, which walked freely from Pushkinskaya to Kamergensky Pereulok. There participators dispersed, later day some boneheads had bad luck to meet with the anti-fascists.

This was one of the first attempts to mobilize anti-fascists and anarchists against homophobia in Moscow. There were plenty of problems and disappointing moments, but altogether it may only be judged as a success. 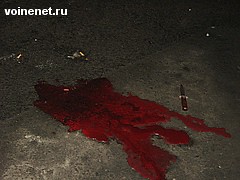 Only after the action participators learned that one of the anti-fascists, a RASH skinhead, was for unknown reasons in other side of the Tverskaya Street and was attacked by 15 Nazis and stabbed several times. Most dangerous wound reached his guts, such wounds are dangerous as they may lead to blood poisoning. He was done an operation and became conscious day after, he is recovering. We do not know currently how much money is needed for his hospital bill, but we already know that it will be a lot.

I live in Melbourne, Australia. I like anarchy. I don't like nazis. I enjoy eating pizza and drinking beer. I barrack for the greatest football team on Earth: Collingwood Magpies. The 2021 premiership's a cakewalk for the good old Collingwood.
View all posts by @ndy →
This entry was posted in Anarchism, Anti-fascism, Sex & Sexuality, State / Politics. Bookmark the permalink.