Crazy kids and their intarwebs!

The Southern Cross Soldiers (SCS) finally make it into the papers.

They’re just like real soldiers (only not quite as well paid).

“Friends, today was an historic day, the day Australians stood up against state-imposed multiculturalism,” Darrin Hodges wrote on the night of the Cronulla riots. Accompanying his posting is a series of photographs he took at Cronulla that day, including one of a T-shirt emblazoned with the words “wog free zone” and another of a sign offering free sausages to the crowd, with “no tabouli”. Darrin also speaks of footage he filmed on the day which [FightDemBack!] believes was used in a video released over the weekend that glorifies a mob of rioters bashing various non-whites at Cronulla.

In his article (Victorian police vow crackdown to stop ‘another Cronulla’) Liam makes reference to a Cronulla vid (Videos on [SCS] websites glorify the Cronulla riots to a neo-Nazi soundtrack promising “race war”), which is presumably a reference to the vid Australian Protectionist Party (APP) members Darrin Hodges and Martin Fletcher helped to produce and distribute on Stormfront in the riot’s immediate aftermath. Hodges & Co. maintain that the ‘riot’ was in fact a ‘White Civil Uprising’, an opening shot fired in a civil war in which their side seeks to return Australia to its natural status as a 100% White outpost in Asia. While Hodges & Co. are based in Sydney, at the same time, in Melbourne, another APP member, Luke Connors, in his then capacity as spokesperson for the now-defunct ‘Patriotik Yoof League’:

“‘When you have areas which are majority Muslim, because they don’t tend to adapt that well, or majority African or Middle Eastern extraction, and right next door you have an area which is 90 per cent Anglo-Saxon, or Anglo-Celtic, there is going to be friction,” he said.

“Also, out past Springvale, along the train line, there is that same sort of segregation going on, in working-class areas where they are competing for the same jobs and there is a high unemployment rate.”

~ Ewin Hannan and Richard Baker, Nationalists boast of their role on the beach, The Age, December 13, 2005

In the meantime, the silly boys manly Aryan worriers of the APP are currently trying to arrange for BNP Fuhrer Nick Griffin to pop over for a cup of tea and a chat about strategies for making Australia a wog-free zone averting the demographic genocide that is threatening his Fatherland and the Mother Country (“caused by the large-scale immigration of people from the Third World”). As things stand, however, and especially given what appears to be widespread opposition on the part of VIPs, it appears that Gub’mint authorities are unlikely to approve Nick’s visa application. 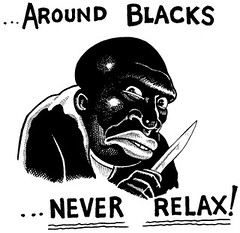 Earlier this year, spokesperson for the NSW APP, Darrin Hodges, described Third World immigrants as sub-human: “Australia was a beautiful place once, before it was flooded with third-world sewerage from African [sic] and Asia.” Adds, a Major-General in the Southern Cross Soldier Army, echoes this sentiment: “All these people that are coming over to our country that aren’t Aussies are trying to take it over,” Adds said.

POLICE will use roadblocks, mounted coast patrols and fines for swearing to protect Melbourne beaches from a Cronulla-style anti-immigrant gang.

The crackdown follows boasts by the 200-strong Melbourne chapter of the Southern Cross Soldiers, who admit having criminals and neo-Nazis in their ranks, that they will converge on bayside beaches this summer.

Police in bayside suburbs will implement Operation Beachsafe, which shares the name given to NSW police’s post-Cronulla riots crackdown.

Inspector Neil Patterson, of Moorabbin police, said: “There’s one group in particular that has indicated they intend to hold parties on beach locations.

“The message is if you’re coming to the beach areas . . . to drink or cause problems, we’re going to be there ready to target you.”

Melbourne SCS co-leader Adds said members included criminals and self-described neo-Nazi skinheads, and some had relatives in the Hell’s Angels.

“All these people that are coming over to our country that aren’t Aussies are trying to take it over,” Adds said.

“We’re just trying to put the word out that we don’t like it.”

The radical police plan to protect beaches from December to March includes:

ROADBLOCKS and car checks to stop troublemakers heading to the beach.

A ZERO-TOLERANCE blitz, including on-the-spot $130 fines for swearing on the beach, to stop trouble before it starts.

PHONING parents of drunk and violent youths to pick up their children from police stations.

POSSIBLE referral to the Department of Human Services if parents of young offenders cannot be contacted.

Masked soldiers in the posse call themselves “SCS defenders” and “SCS enforcers” and pose in front of patriotic paraphernalia wearing matching hoodies and wielding weapons including a machete, jemmy and spanner.

Videos on their websites glorify the Cronulla riots to a neo-Nazi soundtrack promising “race war”.

“If we can stop anti-social behaviour in its starting forms, then it won’t increase into forms of violence,” he said.

I live in Melbourne, Australia. I like anarchy. I don't like nazis. I enjoy eating pizza and drinking beer. I barrack for the greatest football team on Earth: Collingwood Magpies. The 2023 premiership's a cakewalk for the good old Collingwood.
View all posts by @ndy →
This entry was posted in Anti-fascism, Media, Student movement. Bookmark the permalink.