Downunder Newslinks has been attacked by the corrupt Mainstream Media within Australia. The media outlets do not want Australians to see the truth!

Downunder Newslinks Media Centre is now accessible! Hopefully the news section will be up again soon. For now just the Gallery, Articles and Multimedia section will be open.

Along with his support for the APP — he co-administers the Forum with Darrin Hodges — Martin’s efforts on behalf of the 14 words — “We must secure the existence of our people and a future for White children” — continue nonetheless. Along with his provision of a copy of the Muslim Massacre videogame, Martin provides hours of Yanqui infotainment on his ‘news’ site, including documentary videos on Barack Hussein Obama, Holocaust denial, David Duke, Stormfront and dead Nutzi Dr William Pierce (author of The Turner Diaries). Indeed, on Downunder Newslinks, The Turner Diaries, along with The Myth of the Six Million, The International Jew, Did Six Million Really Die? and The Protocols of Zion are all available to help White People interpret the Australian news. (Note that Brizvegas resident Eric Vaughan pulled his game last month after a media outcry, but has since placed it back online.) 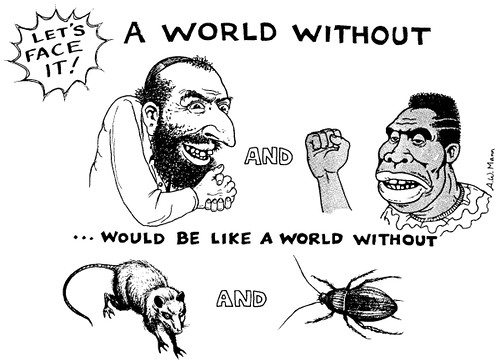 Darrin and Martin are Protectionists: they want to protect (White) Australia from Asians, Muslims, Communism, Multiculturalism, teh Gays, Muslims, and Asians. (And Muslims.) Once an admirer of Hitler, a Jew-hater, a member of Don Black’s Stormfront website and Dr James Saleam’s Australia First Party, Hodges has since been expelled from/renounced his membership of the Party (denounced as the ‘Australian Faggot Party’), denied his membership of Stormfront, made his peace with ZOG, and, presumably, learnt that public expressions of support for Mr Hitler are unlikely to endear him to the electorate. In other words, Darrin used to share Martin’s ongoing hatred and contempt for The Jew (the pair met via Stormfront) but in the last few years has transferred his hatred for The Jew to Islam.

“I’m more interested in the purer form of fascism… and while I don’t subscribe to the whole ‘worship Hitler’ thing, his comments on multiculturalism and politics in general are still just as relevant today as they were 70-odd years ago” he once wrote. On June 20, 2005, he added that “i cant say im into the whole national socialist thing – as far as im concerned, National Socialism died with it’s [sic] creator, not that i do not have any regard for his writings, indeed, they still have much relevance today – he laid a foundation that we should build on”. And just for good measure, a week later (June 26) Darrin further noted that “i have some good colour footage (no sound) of Adolf Hitler at The Berghoff. PM me if you want a copy of the footage”. (’darrinh’ joined the world’s premiere White supremacist website in June 2005.)

Still, that was aeons (three years) ago, and most recently Darrin has (re-)converted his website campaigning for election to Sutherland Shire council (Darrin got 333 votes) into ‘The Infidel Diaries’, from which vantage point he wishes to propagandise against Islam. Its true face, he argues, is Death, Terror, Violence.

Speeches along those lines will presumably be delivered by British National Party Führer Nick Griffin when he arrives in Australia in December on a tour sponsored by Darrin and Martin’s party.