“The alleged Hitlerite gas chambers and the alleged genocide of the Jews constitute one and the same historical lie, which made possible a gigantic financial-political fraud, the principal beneficiaries of which are the State of Israel and international Zionism, and whose principal victims are the German people — but not their leaders — and the entire Palestinian people.” ~ Robert Faurisson, 1980

1) “We have today in Europe and different parts of the world we have literally thousands of people in prison right now right as I speak for simply having different opinions about some aspects of the Second World War… These are men and women who simply argue that… some of these atrocities have been exaggerated, and there have been some serious misconceptions about aspects of the so-called Holocaust…”

Hmmm. Fascinating. Duke then proceeds to name some of these “literally thousands” of people: Wolfgang Fröhlich (Austria); Robert Faurisson (France); Jean-Marie Le Pen (France); David Irving (UK); Germar Rudolf (Germany); and Ernst Zundel (Canada / Germany). Now, I’m no mathematician, but by my calculations, there’s at least another 1,994 people in prison right now right as I write for simply having different opinions about some aspects of the Second World War.

Or: Duke is a lying little weasel. As a further example:

On this point, Duke is right. Well… except that he’s wrong. And a brief search would reveal as much. For example, the editorial in the UK’s The Independent (Free speech, responsibility, and the right to dissent, February 21, 2006) reads:

We would argue, however, that laws restricting free speech are not the way to deal with Holocaust denial. As a historian and a private citizen, Mr Irving is entitled to believe what he pleases, however deluded or unsubstantiated that may be. He should also be able to say what he believes on a public platform. To prosecute Holocaust denial is the start of a slippery slope that ends in the proscription of all dissent. And dissent can be defined as anything which at a particular time displeases those in authority.

Yesterday, Mr Irving astonished the court by announcing that he now accepted the historical fact of the Holocaust, having read the personal papers of Adolf Eichmann. At worst, this was a ploy calculated to minimise his sentence. At best, it showed that the historian – for all his vile opinions – was still scholar enough to be swayed by documentary evidence. As repressive states have shown down the ages, minds are changed not by persecuting those who hold inconvenient views, but by exposing them to experience and to facts.

Irving’s views are repulsive and wrong. He is a deeply offensive crank, and a litigious one, who has tried to use the libel laws to silence his critics. Five years ago, he sued the American historian, Deborah Lipstadt, after she described him as a Holocaust denier, and lost. In a withering 333-page judgment, Mr Justice Charles Gray described him as an anti-Semite, a racist and a neo-Nazi sympathiser who had “persistently and deliberately misrepresented and manipulated historical evidence”.

Irving’s opinions are indefensible; his right to hold them, however, must be defended. For reasons of both principle and expediency, he should go free. Freedom of speech includes the right to be hopelessly, demonstrably and repeatedly wrong. It is not to be applied selectively, depending on the nature of the speech in question, but universally and consistently. The UN Declaration of Human Rights is unequivocal: “Everyone has the right to freedom of opinion and expression.”

Upon Irving’s release in December 2006, the International Herald Tribune reported:

Even some of Irving’s fiercest foes opposed the decision to jail him. Deborah Lipstadt, a historian at Emory University in Atlanta who won a libel suit filed against her by Irving in 1998, said in an interview, “I don’t believe that history should be adjudicated in a courtroom”.

Germany’s plan to try Ernst Zundel on charges of denying the Holocaust and inciting racial hatred is raising fears that it could revive his status among neo-Nazis and turn him into a martyr. A German judge ordered Zundel held in jail after arraigning him on the charges Wednesday, a day after he was deported from Canada. Clemens Hoeges, a senior editor with the German newspaper Der Spiegel, told CBC News that the trial could thrust Zundel and his Holocaust denials back into the spotlight. Hoeges said Zundel was very famous in the fascist movement a decade ago. However, he faded from view as neo-Nazis turned their attention from the Holocaust to focus on issues such as immigration and high unemployment rates. “He will become a figure for them, a sort of martyr,” Hoeges predicted in a telephone interview from Hamburg. Hoeges said Zundel is likely to be convicted on the charges, both criminal offences in Germany. If he’s found guilty, Zundel could face up to three years in prison… 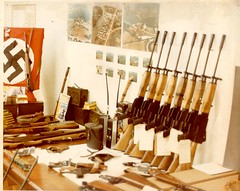 3) “And as you know and I know, both of us, we have a long record… we’ve never been associated with any sort of violence against anyone, or illegal activities against any person…”

In December 2002, Duke plead guilty to tax evasion and mail fraud, and was sentenced to fifteen months prison. More importantly, perhaps — except for those gullible followers of Duke’s who had their money fleeced — was Don Black’s involvement in a bizarre attempt, code-named ‘Operation Red Dog’, to stage a military coup in the Dominican Republic in April, 1981. As a result, Black served three years in prison.