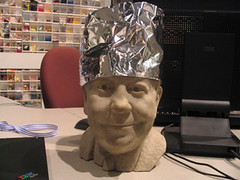 ‘Baron von Hund’ — ie, David Innes when he’s not playing Dungeons & Dragons on Stormfront — has recently decided to retire from the public eye; presumably in order to pay more attention to the restoration of the Order of the Temple — ie, real life. Innes’ two most public promotional activities were his monthly BBQs, held at his house in south-eastern suburban Perth, and, more recently, his weekly Internet radio show, Chunder Down Under. (Innes also maintains a website, a kind of ‘White Supremacism For Beginners’, the history of which is rather amusing too.)

Innes’ decision to remove his tinfoil helmet is a somewhat noteworthy development.* That’s because he — along with his brother Paul (‘Steelcap_Boot’) and partner Lilith (Peterson) — have for the last few years been doing as much as their meagre talents will allow them to promote the expansion of “Mister” Don Black‘s (see below) business into the local racist market. Thus April’s BBQ — “Remember it’s not just a BBQ, it’s an event!” — was planned to feature speechifying by Der Baron, access to a library of neo-Nazi muzak (ie, Innes’ CD collection), racist texts (with words as well as pictures), and various other forms of racist and fascist propaganda, much of it peddled — potatoes and melons wholesale prices straight from the lock-up — by his bonehead brother Paul. Oh, and a “range of meats and beverages for all appetites”! All in a ‘safe, secure and private’ (sic) location.

“Christ, if that doesn’t get you excited about coming to the April BBQ — what the hell will?”

Well, nothing, now that it’s cancelled.

In addition to praising the virtues of Black’s business plan and distributing racist and fascist propaganda (both in Perth and other parts of Australia), Innes’ kkklan has embarked on an informal plan to establish what racists in the United States refer to as a P.L.E., or “Pioneer Little Europe” — ie, the creation of new territories for occupation by Europeans of short stature. Well, I think. (Christian Kerr may know more.) Whatever: it’s doubtful whether the expressed desire for lebensraum will provide sufficient motivation for Innes and his little kkklan to leave their loungerooms in the Perth foothills.

Besides being the subject of the most cringeworthy forms of deference by local racists, Don Black is a Florida businessman, owner and chief administrator — Hauptverwalter — of the Stormfront website. He is also an ex-KKK leader (1978–1987), having assumed the leadership of the groupuscule David Duke left to pursue his ongoing campaign to make himself more palatable to the tastes of a less crazed audience. Black himself is probably most notorious for his unsuccessful attempt to overthrow the government of the [island of Dominica] in 1981. According to Matthew Lauder, ‘Operation Red Dog: Canadian neo-nazis were central to the planned invasion of Dominica in 1981’:

On April 27, 1981, two Canadians, Wolfgang Walter Droege and Larry Lloyd Jacklin, along with eight Americans, were arrested in New Orleans by ATF, FBI, and US Customs agents in an early morning raid. Later, four more Canadians would be arrested, including Marion McGuire, James McQuirter, Charles Yanover, and Harold Woods. All of the Canadians and Americans arrested were members of the far right with the exception of Yanover and Woods. Yanover was a well-known Mafia crime figure from Toronto while Woods was a psychiatric patient in love with McQuire. Woods was arrested in Dominica after trying to break McQuire out of prison.

On Dominica, Patrick John, the former Prime Minister, Major Fred Newton, the commander of the army, three additional army officers, and two civilians (including Dennis Joseph, the former manager of the Dominican broadcasting service) were arrested. In total, more than 20 people were tried and convicted of conspiracy charges in Canada, the US, and Dominica.

The invasion, named Operation Red Dog by the mercenaries, was simple. The group of neo-Nazis planned to travel from New Orleans to Dominica on a chartered boat, land at night in rubber boats, meet up with John and his guerrilla force of disgruntled army veterans and Rastafarian rebels, and then lay waste to Dominica’s police force and political leaders. Contrary to Stanley Barrett’s analysis (1987), the primary purpose of the invasion was not to establish a base of operations for white supremacists, but rather to set-up a series of lucrative businesses including cocaine manufacturing plants, casinos, hotels, brothels, and a gun running operation. Considering the size of Dominica, which is only 300 square miles, and its military and police force, the coup was achievable…

If not actually achieved: weird shit, nevertheless, and the beginnings of a great Hollywood film script. Incidentally, while Black survives and even thrives by milking credulous white racists of their money, Droege does not, having been shot dead by a fellow cocaine addict named Keith Deroux on April 13, 2005: on June 16, 2006, Deroux was sentenced to 10 years jail after pleading guilty to manslaughter (Don Black served three years for his part in Operation Red Dog).

Innes’ decision — assuming it’s genuine; you can never tell with this mob — to cease both his chundering and his monthly BBQs has been accompanied by some wailing and gnashing of teeth on the part of the few dozen regular Australian Stormfront forum members who’ve noticed. It’s also been accompanied by aggrieved speculation as to why, precisely, Innes has decided to throw in the towel, and much applause for boofhead’s attempts to popularise a Dinky-Di version of David Duke’s cosmetically-enhanced nonsense locally.

Much of the angst being expressed by the (other) racists on Stormfront regarding Innes’ sudden and unexpected announcement that he’s taking his bat and ball home to suburban Perth (of particular note is Ben Weerheym‘s reference to ‘silly things’; presumably referring to his gang painting swastikas on a war widows’ retirement village) appears to revolve around their belated discovery that not only does the site and its politics attract individuals suffering all kinds of mental pathologies similar to their own, but also some who don’t. This is especially the case with regards the violent boneheads associated with Blood & Honour Australia, who appear to have played no small part in Innes’ downfall.

The Stormfront mob’s incomprehension at the nature of their own milieu would be amusing if it wasn’t equally evidence of the pathetic nature of their political narrow-vision; not to mention the extent to which it relies on a desperate and never-to-be-fulfilled phantasy of White racial supremacy. While this obviously serves a necessary psychological function for the teenage boys who flock to it, it really doesn’t form the bestest foundation for a social movement. As for political parties, the party of choice — Australia First — is led by the son of Lebanese migrants.

* Well, I noticed anyway; but then I, like John Safran, find Stormfront to be both entertaining and informative. John Safran to the Grand Dragon of the KKK: “I’m whiter than Hitler. I’ve got blonde hair and blue eyes and Hitler had brown hair and brown eyes. At school I’d be the one beating up Hitler for being a wog”.

I live in Melbourne, Australia. I like anarchy. I don't like nazis. I enjoy eating pizza and drinking beer. I barrack for the greatest football team on Earth: Collingwood Magpies. The 2023 premiership's a cakewalk for the good old Collingwood.
View all posts by @ndy →
This entry was posted in !nataS, Anti-fascism, Media, State / Politics. Bookmark the permalink.