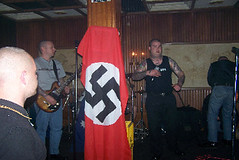 Gary is the proprietor of The Birmingham Hotel (Cnr. Johnston & Smith Streets, Fitzroy | (03) 9417 2706). Above is a photo of the kind of scum Gary likes to play host to: the neo-Nazi Blood & Honour Australia and the meatheads who play for their benefit. Note that the photo was taken on September 23rd, 2006, a gig Gary claimed was just like any other at his public house.

The World According to Gary :

In response to a public protest (October 28) outside his fascist venue:

“It’s not my job to ask people what their beliefs are,” Gary told the protesters who crowded the public bar. He agreed to put the sticker up if protesters left.

In response to the announcement of the protest and an account of racialised abuse:

In lying response to an initial enquiry regarding the (September 23) neo-Nazi gig:

“It was a punk, skinhead gig that was the same as any night of the week,” he said. “I do parties for anyone, doesn’t matter what religion or faith, I don’t judge anyone … When someone comes through the door I don’t ask them what they are.

“When the Iraq war was on, I had Iraqis in the pub, and I don’t judge them. This is about people trying to get their names in the paper.”

Below : Gary-the-lying-ex-bonehead-from-Kiwi outside his bunker, trying to take photos… 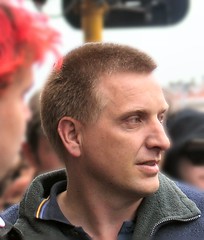 Speaking of support for neo-Nazism, Internode is the Australian Internet company that hosts the B&H website; you can contact Internode to enquire as to why here.

I live in Melbourne, Australia. I like anarchy. I don't like nazis. I enjoy eating pizza and drinking beer. I barrack for the greatest football team on Earth: Collingwood Magpies. The 2023 premiership's a cakewalk for the good old Collingwood.
View all posts by @ndy →
This entry was posted in Anti-fascism, Collingwood, Media, Music. Bookmark the permalink.