Fascism in Fitzroy? Fuck that! 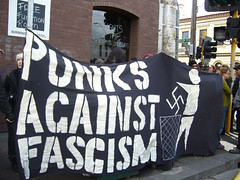 Above : Photo by mazz (Melbourne Indymedia)

Given minimal publicity, a surprisingly large number of people — perhaps as many as 100, I didn’t count — turned out this afternoon to protest/rally outside of The Birmingham Hotel (333 Smith St, Fitzroy | Cnr, Johnston & Smith Streets | Phone 9417 2706). The protest was called for by a number of different groups — including but not limited to Fight Dem Back! and a local women’s group — and following the pub’s exposure as the venue for a neo-Nazi gig organised by Blood & Honour Australia and the Southern Cross Hammerskins, held on Saturday, September 23rd.

Bad yes, but worse still is the fact that: this was the second year in a row that the ISD memorial gig had taken place at The Birmy; Gary, the-pub-proprietor-who-refuses-to-reveal-his-surname, lied to the Melbourne Times when asked about the gig; neo-Nazi gigs (including earlier memorial gigs) have taken place at The Birmy in years previous* and; a woman was subjected to racial abuse on Johnston Street on the night 50 or so boneheads gathered to celebrate the white supremacist Ian Stuart‘s death.

Gary was probably unhappy at the sight of so many people prepared to say ‘No!’, but was certainly more than a little foolish in seeking, first, to take photographs of those assembled and, secondly, to berate a few others for placing stickers on his property.

But aside from Gary — who is, after all, completely unapologetic about his support for neo-Nazism — the pub contained a smattering of locals, as well as a handful of anti-punk poseurs (presumably in attendance in order to offer support to Gary) who looked more than a little embarrassed; especially as they were vastly outnumbered by the real punks outside (for whom ‘punk’ means a lot more than having a funny haircut — who would’ve thought?).

Many thanks to all those who attended (especially the women in orange): it was genuinely heart-warming to see so many people actually giving a shit.

*In 2002, Gary even agreed to allowing Blood & Honour Australia to hold a gig to celebrate Hitler‘s birthday! 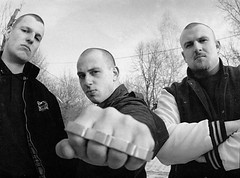 Above : Some real skinheads (Loikaemie)

As for what’s next, the provision of a venue for neo-Nazis in Fitzroy/Collingwood is obviously not a good thing, and may well be considered a problem by those responsible for enforcing Liquor Licensing. Of particular relevance in this context is the obligation of license-holders such as Gary to not detract from the ‘amenity’ of the area.

For the purposes of the Liquor Control Reform Act 1998, the amenity of an area is the quality that the area has of being pleasant and agreeable.

Factors that may be taken into account in determining whether the grant, variation or relocation of a licence would detract from or be detrimental to the amenity of an area include:

* the presence or absence of parking facilities
* traffic movement and density
* noise levels
* the possibility of nuisance or vandalism, or
* the harmony and coherence of the environment.

The Director of Liquor Licensing may reject an objection if he or she considers the:

You can lodge an objection by:

You should remember that objections are treated as public documents and that full details of the objection are provided to the applicant.

You can read more about lodging an objection in our Objections to Liquor Licensing Applications Fact Sheet.

A Local Council may also object to licence and licence-related applications on the grounds that the grant would detract from, or be detrimental to, the amenity of the area in which the premises are situated.

And at present, of the nine councillors on the (ALP/Greens-dominated) Yarra City Council, thus far only Steve Jolly has been vocal in his opposition to Gary and The Birmy’s support for neo-Nazi organising in the area. Concerned local residents are, of course, encouraged to contact their local councillor to enquire as to what, if anything, they intend to do about the matter.

I live in Melbourne, Australia. I like anarchy. I don't like nazis. I enjoy eating pizza and drinking beer. I barrack for the greatest football team on Earth: Collingwood Magpies. The 2023 premiership's a cakewalk for the good old Collingwood.
View all posts by @ndy →
This entry was posted in Anti-fascism, Collingwood. Bookmark the permalink.

21 Responses to Fascism in Fitzroy? Fuck that!