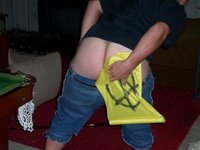 Some months ago, my profile was added to a blog called Leftywatch. Leftywatch is modelled on the UK’s Redwatch, and is maintained by convicted criminal and former member of the Australian Nationalist Movement Ben Weerheym of Perth, Western Australia.

Weerheym, a Dutch immigrant, first came to the Australian public’s attention in 2004 when — having abandoned his ‘wigger’ status in the tiny Perth rave scene (for reasons which remain somewhat obscure) — Weerheym started acting like a big tough fascist. Namely, he formed a gang with other racist losers, and called it the White Devils. The story of the White Devils, like the story of other fascist gangs, is a tragicomedy: the gang engaged in vandalism; the gang got caught; the gang went to jail.

Well, with one exception: Ben Weerheym. In order to avoid a custodial sentence, Weerheym lied to the court about his previous associations with fascist groups such as the ANM, denying that he’d ever been a member. Ironically, Weerheym’s most recent brush with fame occured when he was interviewed by Western Australian police in connection to the disappearance of his former leader, Jack van Tongeren.

Weerheym is rather stupid — even for a fascist — so his turgid prose is often quite painful to read, let alone comprehend, and doing so is leavened only slightly by the unintentional humour of his otherwise retarded scribblings. ‘Leftywatch’, then, consists of little more than run-of-the-mill attacks on gays, ‘leftists’, ‘multiculturalists’, and any other person, place or thing that refuses to accomodate Weerheym and his paranoid world vision. Such antics have naturally come to the attention of groups like Fightdemback, and it’s in response to their success at monitoring ‘hate crimes’ that Weerheym decided to establish Leftywatch.

According to Weerheym, Leftywatch exists in order to ‘fight far-left bigotry in Australia and Aotearoa / New Zealand’. He claims it’s the work of ‘nationalists’ and ‘patriots’, who want to ‘put names to faces’ of those who, such as myself, allegedly fight fascism by using ‘slander’ and by making ‘threats of violence’ towards ‘nationalists’ and ‘patriots’ such as he. He’s even got a name for this motley (and largely imaginary) bunch of racist malcontents: the “Patriot Alliance Down Under”.

PAD, we are informed, has set itself the modest goal of ‘counter-acting’ “…the lies and deceit championed by the… [Jewish] controlled media and leftist intelligen[t]sia“. PAD also allegedly strives to “defend our heritage, culture, customs, traditions, morals, and values, as well as our blood itself, against hostile alien elements that destroy all that we are and all that we as a race hold dear.”

In a word: barking.

While focusing on Mat Henderson-Hau, spokesperson for the trans-Tasman anti-racist network Fightdemback, Leftywatch includes profiles of dozens of Australian and Aotearoan anarchists, leftists and other anti-racist groups and individuals. In a typically twisted ‘Disclaimer’, Weerheym claims that, among other things, he does not feature the relatives of those he profiles. Quite how this squares with his alleging that I have a brother who lives in ‘Mitchum’, I don’t know. He also claims that: “I do not promote violence or any other illegal activity”. Again, quite how this squares with the fact that Weerheym has a criminal conviction for racist vandalism, I’ll leave it up to others to decide.

My Life As A Loudmouthed Anarchist 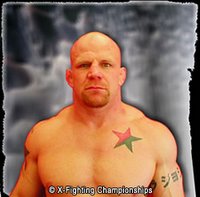 1) am a run-of-the-mill loud-mouthed anarchist;

2) am associated with and possess a very similar personality to ‘Dr Cam Sexenheimer’;

…and a fine fellow he is too!

3) am a left-wing extremist crackpot (confirmation of which may be found by examining my writings);

…is there any other kind?

4) love to “proudly” tell anybody who will listen exactly what I think about… well, anything;

It’s called having a dialogue Ben. You should try it sometime.

5) am a hypocrite because I want to keep my identity secret;

Yeah, from a bunch of violent sociopaths!

6) commonly take random postings and put them in the “mouthes” [sic] of whatever “fascist” I find most convenient;

When Ben writes that I mis-attribute quotes, what he’s actually referring to is this. (How do I know Weerheym made such comments? I logged his IP.)

7) am webmaster and moderator of the Australian Anarchy Bulletin Board (which has 42 members of whom only around five are actually active);

As a half-wit, Ben naturally gets it half-right. I am the moderator of the AABB, not the “webmaster”; the Board currently has 48 members; 36 (2/3) of these have posted.

EIGHT) read Marx and spout leftist diatribes to anyone who will listen (see 4);

I confess to having read Marx. Nonetheless, I am an anarchist, not a Marxist.

9) label anyone who doesn’t tend to agree with me a “fascist”;

…just those who deserve it.

10) came to the forefront of Ben’s mind by acting like an “anti-fash” big man around late 2005 (online anyhow) and finally;

11) maintain a blog which contains my bitter sweet musings on life and politics.

Well, that last point is actually kinda sweet: thanks Ben, you bitter and twisted little fascist you!

Needless to say, Weerheym produces no evidence to support any of these claims, and such ‘facts’ as he does provide are wrong in any case.

Finally, Weerheym rounds off his slanderous attack with two quotes, the first from the Board, the second from this blog:

What I’m interested in to begin with is establishing some kind of network. By that I mean, basically, a way for students who are anarchists to hook up. That has two motivations. One is the fact that, as students, anarchists often feel isolated… Means of working together are either missing at present or extremely partial. So, I propose a semi-formal network to fill this gap, to be a means by which to get anarchist students together and to talk.

Open letter to the gangs of youths who have been torching cars in France.

Comrades! Well done! Give them hell! Do not be intimidated by the fascist police!

Weerheym appears to believe that the first quote has something to do with my wanting to form a group, not a network; his speculation regarding what anarchists involved in such a network might discuss appears to be a projection of his own activities as a member of the extremist fringe group the White Devils (the consumption of alcohol and drugs and discussion of why the Jews are so evil). The second quote I’ve already discussed elsewhere on this blog.

Two final points. I’m not surprised Weerheym attempts to denigrate Yidcore for their kind offer to play the proposed FDB / Timur Kacharava benefit gig. After all, they’re Jewish, and Weerheym is a rabid anti-Semite. And if anyone is interested in the subject of anarchism and Che Guevara, they should read this.