A Skins ‘n’ Sharps Exhibition will be held from Sunday 4th of July 2010 @ The Kustom Lane Gallery, 8 Luton Lane, Hawthorn. 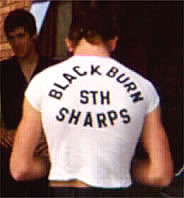 Larry was the leader of the notorious street gang the “BLACKBURN SOUTH SHARPS” from 1972-1977 when the Sharpie sub-culture was at its peak and the working class suburbs of Melbourne were a tough and violent place to grow up. These photographs represent a period from 1975-1976 in Australian sub-cultural history and are one of the few photographic records of that time. Larry began taking photos at the age of 16 using a pocket camera, when he started working as an apprentice motor mechanic and spent his weekly wage developing his shots…

“The recent fascination with Sharpies leaves you wondering – when did a spotted past in suburban Australia become an object of fascination rather than derision?”

::: The Sharpies – Cult Gangs of the Sixties and Seventies

In the 60’s and 70’s the streets of Melbourne were full of gangs but it was the Sharpies, enemies of the Hippies and Mods that held the power on the street. For a mean bunch of kids they were extremely fashion conscious with their crest-knit black shirts and personally designed cardigans. But as Saturday night fever exploded the Sharpies started to conform until the gang slowly faded away.

The Blackburn South Sharps were the most prominent of the 1972-1977 Melbourne ‘sharpie’ gangs. The Sharpies were unique [?] to Melbourne and are an important element of Melbourne’s history in that their clothes were not a copy of US or UK fashion and they listened to Melbourne rock bands. Sharpies were an early precursor to the Australian phenomenon of bogans. 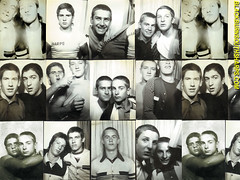 I live in Melbourne, Australia. I like anarchy. I don't like nazis. I enjoy eating pizza and drinking beer. I barrack for the greatest football team on Earth: Collingwood Magpies. The 2023 premiership's a cakewalk for the good old Collingwood.
View all posts by @ndy →
This entry was posted in Art, History. Bookmark the permalink.