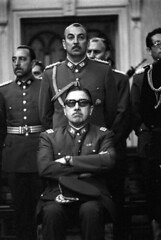 More than 30,000 Chileans have said they were victims of torture or political detention under the 17-year Pinochet regime that ended in 1990.

The public was invited to testify to a government commission that is examining human rights abuses.

There were many reports from men and women of sexual abuse, with about 10% of the testimonies coming from women.

Most said they were victims in 1973 – soon after the military coup that brought [hijo de puta] General Augusto Pinochet to power.

Testimonies were collected from 30,000 or so people from all over Chile, many of them speaking for the first time about their experiences.

“Men and women victims of sexual torture – we have received a lot of testaments of that kind of things.

“These kind of perversions are fairly common if you feel there is no limit on what you can do.”

One torture centre in Santiago was known as “Venda Sexy” – or Sexy Blindfold – and was notorious.

The commission is the first in Chile to examine torture and detention under Augusto Pinochet’s military government.

Other enquiries have examined the number of dead and concluded more than 3,000 political opponents were killed.

Human rights groups have criticised the commission for only hearing testimonies for six months.

They believe more than 100,000 people were tortured or detained during the military government… 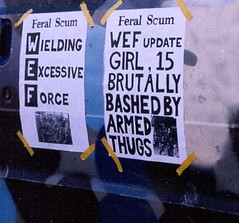 Lawyers and members of the legal support team were shocked and outraged by brutal police assaults on protesters at the World Economic Forum, last night.

Witness statements and observations by the legal support team documented the following account of the police brutality, including the use of potentially lethal force.

Without warning or any attempt at negotiation police attacked a peaceful blockade outside Crown Casino this evening.

The ferocity and violence of the attack was the worst seen so far in WEF protests marred by police violence.

Police charged through and over the protesters wielding long PR-24 side handled batons, striking protesters over the head and body.

Protesters were kicked, punched and dragged behind police lines.

Protesters trapped between lines of police horses and the Casino fence were beaten and prodded through the fence with batons.

One man was beaten by police, while lying prone, and possibly unconsciousness, behind police lines. He was subsequently taken to hospital by ambulance with suspected spinal injuries.

Over 30 people were taken by ambulance or had to attend hospital for treatment. Several protesters have serious injuries, predominately to the head and neck. Some remain hospitalised.

Several hundred police and at least 40 police horses were used to cordon off the intersection of Power St and Queensbridge Rd, to allow several buses carrying WEF delegates to leave the Casino.

Some people were arrested, but shortly after released.

Earlier in the day the legal support team had called on the Victorian Ombudsman to investigate police actions at the protest.

Damien Lawson said today, “The Victorian Ombudsman must intervene as a matter of urgency to prevent further unlawful action by the police and serious injuries to members of the public exercising their right to protest. If protesters have breached the law they can be dealt with by the courts, rather police have acted as judge and jury circumventing the justice system by meting out their own arbritary brutal and dangerous punishment.”

Pauline Spencer said today, “Which ever member of police command who authorised this premeditated use of potentially lethal force should resign. These actions were unjustifiable and parallel human rights abuses seen in some of the worst repressive regimes in the world.”

Dedicated to the cowardly police officer who fractured my girlfriend’s cheekbone… you only strengthened our resolve.

Chomsky: The horrendous terrorist attacks on Tuesday are something quite new in world affairs, not in their scale and character, but in the target. For the US, this is the first time since the War of 1812 that its national territory has been under attack, even threat. Its colonies have been attacked, but not the national territory itself. During these years the US virtually exterminated the indigenous population, conquered half of Mexico, intervened violently in the surrounding region, conquered Hawaii and the Philippines (killing hundreds of thousands of Filipinos), and in the past half century particularly, extended its resort to force throughout much of the world. The number of victims is colossal. For the first time, the guns have been directed the other way. The same is true, even more dramatically, of Europe. Europe has suffered murderous destruction, but from internal wars, meanwhile conquering much of the world with extreme brutality. It has not been under attack by its victims outside, with rare exceptions (the IRA in England, for example). It is therefore natural that NATO should rally to the support of the US; hundreds of years of imperial violence have an enormous impact on the intellectual and moral culture.

It is correct to say that this is a novel event in world history, not because of the scale of the atrocity — regrettably — but because of the target. How the West chooses to react is a matter of supreme importance. If the rich and powerful choose to keep to their traditions of hundreds of years and resort to extreme violence, they will contribute to the escalation of a cycle of violence, in a familiar dynamic, with long-term consequences that could be awesome. Of course, that is by no means inevitable. An aroused public within the more free and democratic societies can direct policies towards a much more humane and honorable course.

I live in Melbourne, Australia. I like anarchy. I don't like nazis. I enjoy eating pizza and drinking beer. I barrack for the greatest football team on Earth: Collingwood Magpies. The 2021 premiership's a cakewalk for the good old Collingwood.
View all posts by @ndy →
This entry was posted in Anti-fascism, Film, History, State / Politics, War on Terror. Bookmark the permalink.