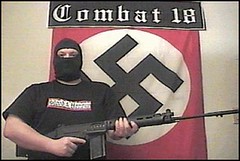 On Saturday the 23rd of September, neo-Nazis from around Australia and the world came to Melbourne for the annual Ian Stuart Donaldson memorial gig. Ian Stuart, who died in a car crash in 1993, was the lead singer for neo-Nazi band Skrewdriver [2].

The gig was held by the local branch of Blood & Honour – a global neo-Nazi network banned in Germany and considered a terrorist organisation by British and Belgian authorities – and the Southern Cross Hammerskins (SCHS), the local branch of another international neo-Nazi skinhead network. These two groups are responsible for numerous murders, bombings, arsons and assaults around the world.

Fight Dem Back! discovered that the gig would be held at the Birmingham Hotel after an infiltrator expressed an interest in attending. To their surprise, they were informed that the concert would be held in Fitzroy, and not at the Jam Tin in Cheltenham – a venue which Blood & Honour had used in the past.

Although the manager of the Birmingham has denied hosting the event, all three bands listed on the poster for the concert played at the Birmingham that night and approximately 50 members of Blood & Honour and SCHS were present.

Fight Dem Back!’s Australian spokesperson, Cam Smith, says the matter must be taken seriously by the wider community and the authorities.

“These are violent thugs who believe they not only have a right, but a duty, to harrass, intimidate and assault those who do not fit their bigoted ideal. If you are not white, not heterosexual, and if your politics are anywhere to the left of Adolf Hitler then you’re fair game as far as they’re concerned. The community needs to let The Birmingham know that they’re not happy with this element being brought into Fitzroy. This is a multicultural area and houses many vulnerable citizens – easy targets for neo-Nazis.”

“We are sending a powerful message to The Birmingham Hotel to stop providing a venue for these people to spread their vile message. These are dangerous fanatics – we don’t want what is happening in Europe to happen here,” he continued, referring to the uncovering of a Blood & Honour plot to destablilise Belgian democracy by way of mass murder earlier this month [3].

“As far as we are concerned, these scumbags are the real threat to Australian values.”

[1] Fight Dem Back!, founded in 2004, is an Australia and Aotearoa/New Zealand wide network of anti-fascist activists. Their website can be found [here].

[2] Skrewdiver were a pioneer of the “white power” music scene. More information about them can be found [here].

[3] For more, see articles in the International Herald Tribune and BBC News. 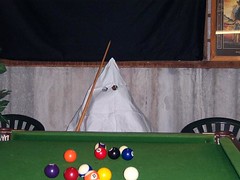 Above : A patron enjoys the laid-back ambience at The Birmy…

I live in Melbourne, Australia. I like anarchy. I don't like nazis. I enjoy eating pizza and drinking beer. I barrack for the greatest football team on Earth: Collingwood Magpies. The 2023 premiership's a cakewalk for the good old Collingwood.
View all posts by @ndy →
This entry was posted in Anti-fascism, Collingwood, Media, Music. Bookmark the permalink.

11 Responses to FDB! Press Release: On Blood & Honour, neo-Nazism and The Birmingham Hotel